The name of this chassis family means Dirt Two wheel-drive: it better matches the market segment aimed by Tamiya with the chassis than a real lineage of chassis that would evolve with time.

The DT-01 version is the evolution of the iconic 1983 Grasshopper. It was first released in 1992 with the 57501 Rookie Rabbit in the XB Pro series, but only in 1996 with the 58184 Fighter Buggy RX in the 58 series of assembly kits. This series of chassis is very important for Tamiya commercial strategy, and it also shows an example of how a local market can influence Tamiya global strategy. 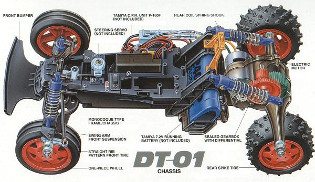 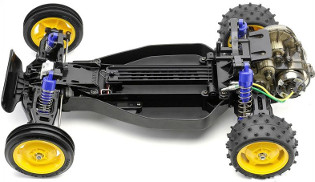 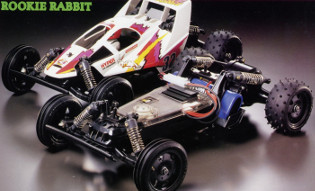 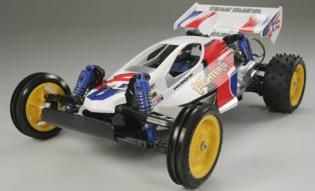 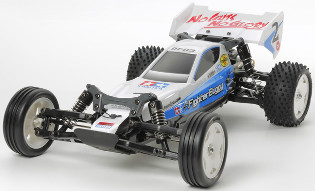 Again, this platform is very important in Tamiya commercial strategy: that's why we are going to review it in detail.

First, the lineage between the Grasshopper platform and the DT-01: comparing the chassis, the rear solid axle is there with a central pivot that greatly improves suspension. The front drivetrain is still very basic and imprecise: to make it short, whether it is a Grasshopper, a Grasshopper II or a DT-01, when you give a steering order at the radio, the chassis will execute that order... if it decides so, when it decides so and the way it decides to execute it

Of course, all this is performed while the buggy bounces all around, more or less depending on the generation. Basically, the 4 wheels touch the ground simultaneously only when the buggy is still.

There is a very interesting video showing the direct lineage between the Grasshopper II generation and the DT-01 Madbull. Whether you understand German or not, images are self-explanatory, but the fact the video was made by Tamiya Germany is significant, as we will see later.

Promotional video of the Madbull (© Tamiya)

These two videos also show the relationship between Tamiya Germany and Tamiya Japan: the Madbull became a reality because of a specific adaption made by the German distributor. Among all models using the DT-01 chassis, this “big wheel” version is the best to drive in my opinion, because it can drive in about any condition.

Here a the 3 models using the DT-01 in the 58 series of assembly kits: 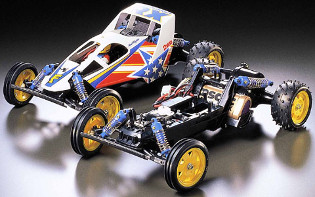 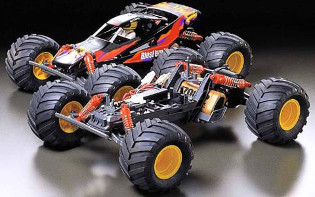 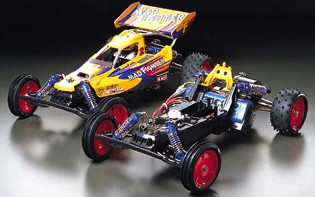 The two most important models of the series are the first and third one, more precisely, their “Fighter” name is important. In fact, these two models will start an extremely popular promotional series on the German market: the Fighter Cup. This is a yearly championship organized by the German distributor in which only the “Fighter” models can compete. These low-priced models being specifically made for beginners, these races are extremely popular among kids, which makes this championship an excellent promotion for the models and the brand. Of course, it also has a huge impact over sales.

It seems that the “Fighter Cup” is held in other countries, probably Japan and others (may be using another name). In France, there's no such championship or whatever kind of promotion at all for any Tamiya products. T2M, our local distributor doesn't seem interested in making the slightest effort to promote or sell Tamiya products: shame on them!. Anyway.

In 2005, Tamiya released the DT-02 chassis: same market segment, but an entirely new chassis design breaking with the architecture inherited from the Grasshopper. Goodbye the rear solid axle, the bouncing characteristic et the free-will steering: the DT-02 chassis is definitely modern, still aimed at beginners but also to drivers willing to begin racing in clubs. 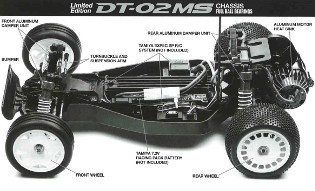 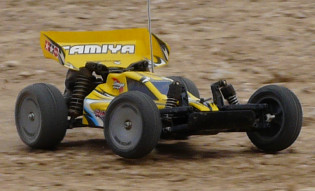 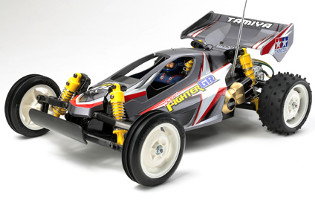 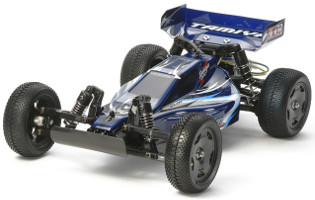 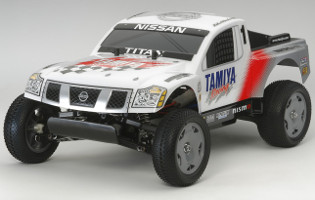 Only some models are displayed here: others also use the DT-02 chassis, especially the Holiday Buggy and Sand Rover re-releases. This selection shows the “Fighter” series inside the DT-02 line-up, models that successfully participate to Tamiya promotion through the “Fighter Cup” championship, like in Germany.

The last model is a Truck version, the first and only one using the DT-02 chassis, but it did start a variant series that will continue on the next generation. The chassis is identical to the buggy variant, only the bodyshell changes to make it a Truck. 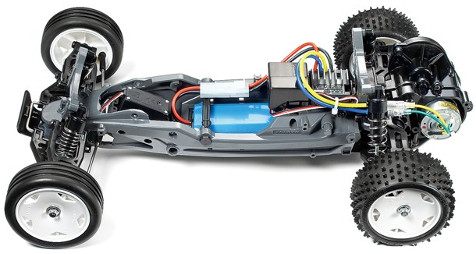 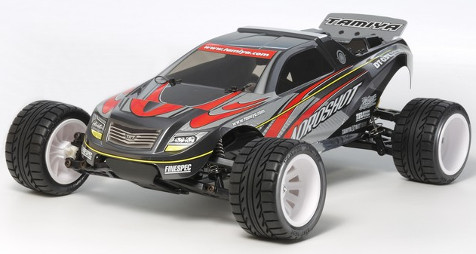 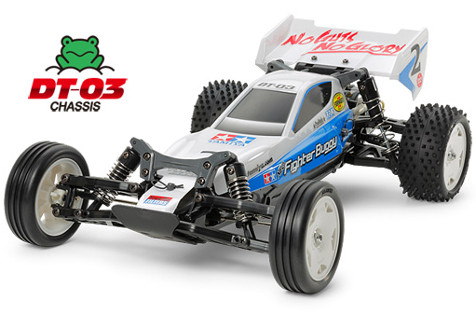 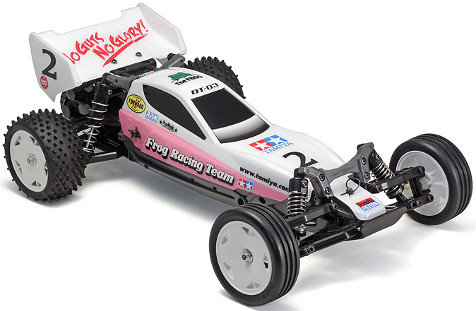 The fact is that the new DT-03 is not entirely new: the entire gearbox and the front and rear arms directly come from the DT-02 without the slightest modification. In other words, the DT-03 is just an entirely new chassis bathtub, thinner and longer than the previous generations. The Truck variant was soon offered, this time with a specific DT-03T naming: the chassis is identical to the buggy variant, only the wheels change (in fact, they are borrowed from the Stadium Blitzer truck, and others using the same wheels in different colors).

The most important was how the very first model using the DT-03 chassis was presented: officially, its name is Neo Fighter Buggy. No that sexy, apart from that logo recalling some memories: the logo is the Frog's, the iconic model from the 80's. Even greater, Tamiya provides a second set of stickers in order to turn the Neo Fighter Buggy into a Neo Frog, which is the second “unofficial” name of the model. Anyway, “No Guts No Glory!” stickered on the rear wing, that's nice!

Conclusion on the DT platform

At the beginning, this platform was the mechanical and commercial follow-up of the Grasshopper before it became technically “independent” while keeping the same commercial role. Like the Grasshopper platform before, the DT platform is a great commercial success, even though the sales volumes probably can't compare since time has changed.

The DT-01 based Madbull and Mad Fighter continuously sold since their first released by the end of the 90's, and were even re-released in 2011 under the very same name and reference number.

The second generation is also a success, both in the “Fighter” series and classic form, especially with the Holiday Buggy and Sand Rover re-releases that Tamiya certainly sold by zillions.

As for the third generation, it is too soon yet to know how it sells: however, mixing a “Fighter” and a “Neo Frog” to start with, that's definitely a brilliant idea and a good sign for the future.