This is one of the most important chassis series in Tamiya RC history, and probably the one that sold most. At least on the entry-level segment which is highly strategic because it is the entry point for most of RC beginners. The least that can be said is that Tamiya did a fantastic move when they released the Grasshopper in 1984 (kit 58043).

This bulletproof chassis design is simple and basic: ever-lasting gearbox enclosed into a solid axle, bathtub chassis and springs as dampers. RC purists suffered heart attacks when they first saw it: the word “suspension” barely fits that “thing” bouncing all around, nothing to setup at sight so you got to be an heretic to ever race this chassis. Well, the fact is no one cared about professional RC opinion about it: the Grasshopper was never made for them. Instead, the Grasshopper was tailored for RC beginners, kids or grown-ups willing to simply run it and enjoy it: for all of them, way more people than high-end enthusiasts, the Grasshopper is just the best ever buggy. Ever.

Hereafter, the two most important models of the platform in buggy and big wheels variants: these are the best-sellers in their categories, the first three of them having been re-released. Here, the Madbull might seem an intruder: and yet, this model has been continuously sold since its first release and was even re-released in 2011 without the slightest change to the point of keeping its reference number. 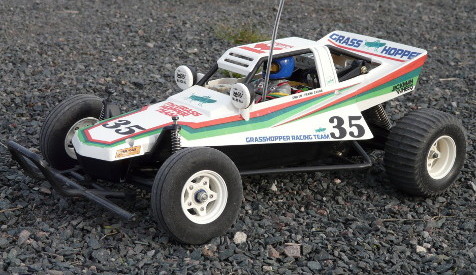 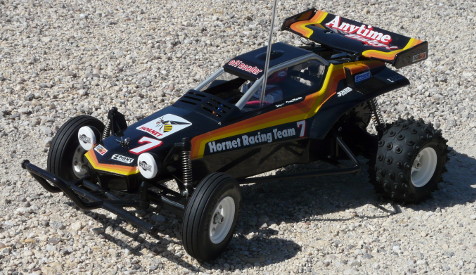 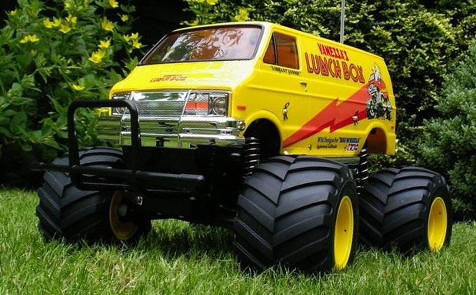 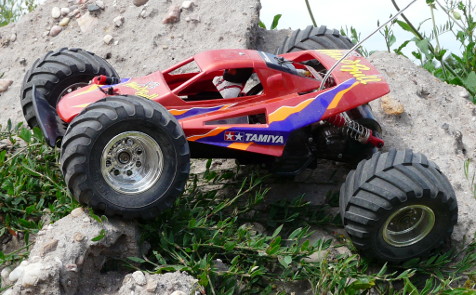 Well, all chassis do not look like being the same, nor belonging to the same lineage at first sight, some of the chassis even being named differently. And yet, all share the same basis:

That's where Tamiya designers were geniuses: daring to offer an extremely reliable chassis, robust, low-priced and focused on pure leisure usage. This mechanical basis was further borrowed by other buggies like the very popular Hornet and big wheel wheeling vehicles. The Grasshopper II is a discrete evolution, mainly incorporating the Hornet mobile rear solid axle. The DT-01 is the next evolution with a central pivot on the rear solid axle that greatly improves the suspension and the battery relocation: it was used as a buggy variant and an hybrid buggy / big wheels with the Madbull.

The success of this platform was tremendous then and still decades later, one proof that unpretentious basic leisure-oriented models can enjoy the masses. Only one model of the series looks odd: the 58124 Super Hornet from 1994, some sort of Hornet update. Despite the prestigious heritage, it never sold well as it seems and its appeal for collectors is very low.

Paradoxically, many owners of these models set up friendly races: they are very enjoyable moments. Trying to control very bouncy cars, not counting with models popping wheelies, is much more fun than driving seriously.

The above photos are illustrations of this platform in action. The first one depicts a driver struggling to remain on the track because the reactions of the rear drivetrain of the buggies are unpredictable. The second one depicts how bouncy these models are (this particular photo was shot in a straight line on a flat ground

). On the third one, the Lunch Box at its best: no surprise it features a wheelie bar. As for the last photo, it depicts the latest evolution of the platform at its best too: the very soft suspension on the Madbull makes it very stable (compared to the previous models) and it looks somewhat like a lizard, often popping one or two wheels in the air but still going straight.

Promotional video of the Grasshopper (© Tamiya)

Promotional video of the Hornet (© Tamiya)

With the Grasshopper platform, Tamiya offered a very solid, low-priced and very fun series of models. In the 80's, these were the best answers to the growing demand from beginners, young and grown-up, and anyone who wanted to enjoy an RC kit. These models, either the buggy version (Grasshopper, Hornet) or the variants (CW-01, DT-01), are still loved today as they were... 30 years ago!

Conclusion on the Grasshopper platform

This platform Is one of the most important for Tamiya during the 80's:

The most interesting with the Grasshopper platform (and derivates we will review right after) is how Tamiya found the perfect match to the young public in the 80's. Yes, I wrote “perfect match” given the number of Grasshopper and Hornet they sold, the Hornet presumably being the most sold RC model ever in the industry.

More fascinating is that it all started again in the second half of the 2000's with the first Grasshopper and Hornet re-releases. Indeed, it is not such phenomenon as in the 80's because time has changed: today's offer is way bigger and more diverse than it used to be in the 80's. But still, these models the kids enjoyed in the 80's still please the kids of now, our kids raised with computers and cell phones: somehow, this is reassuring (says the 40 year-old guy