Let's rewind (for those of you who read this article as a book): we last reviewed the Falcon platform, that is right before reviewing the “modern” buggies. Well, if we can say so because Tamiya had already released several “modern” buggies when the Bear Hawk was released

So, we go back right after the SRBs and before the FAV platform: we are in 1983 when Tamiya introduced a new 2WD buggy platform the fans named ORV for Off Road Vehicle.

This is a very important series for Tamiya, especially because it counts several iconic models. The first model to use it was the 58038 Subaru Brat in 1983 and the last evolution will be released about 14 years later with the 58192 King Blackfoot in 1997. 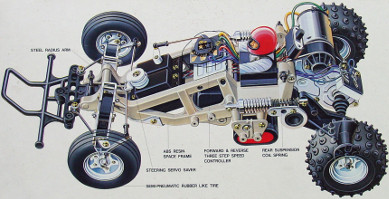 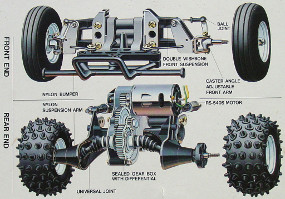 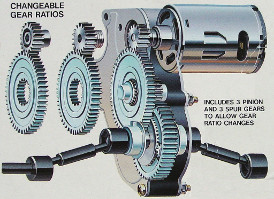 In the Subaru Brat and Lancia 037 Rally “configuration”, the gearbox doesn't include a differential, unlike the following buggy and big wheels variants. The big wheels variant will be equipped with a bigger front damper tower and future evolutions will receive modified gearbox and rear drivetrain.

The main models released on the different ORV variants: 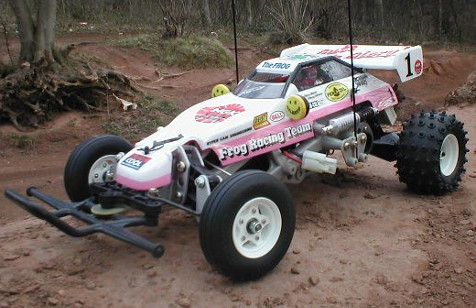 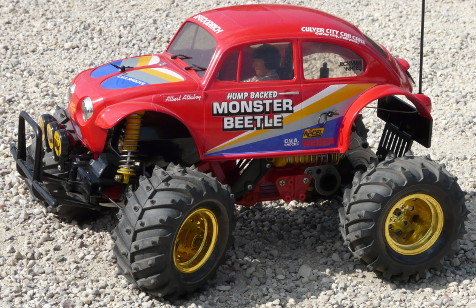 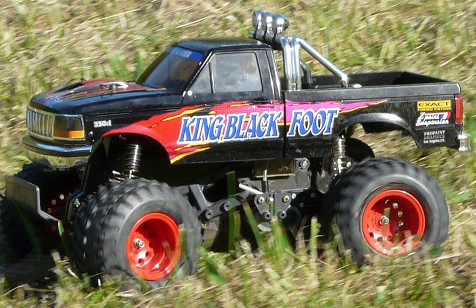 Promotional video of the Subaru Brat and Lancia Rally (© Tamiya)

Promotional video of the Frog (© Tamiya)

It is worth to mention the RC context when the Frog hit the market back in 1984: until 1982, the SRBs dominated on the tracks because they outperformed any other existing model at their time. In 1982, Kyosho released their Scorpion, a more modern and better performer than the SRBs: it was the SRBs end of career on tracks, even though they kept selling well on the leisure-oriented scene.

When the Frog was released in 1984, it is the best mid-range buggy, the Scorpion living its last months of racing supremacy before the Associated RC10 hit the market. As a matter of fact, the Frog will both turn into the preferred buggy for all beginners in racing and will also be very popular for leisure-oriented usage.

The Frog is a radical change in Tamiya buggy design since it doesn't replicate any real-size vehicle and the chassis can't compare either to anything else seen before in RC or the real world. However, the Frog introduces a new marketing concept: models named after animals, one concept Tamiya will use for years after that, coupled with an often funny catch line specific to the buggy. “Not guts no glory” was the one used for the Frog.

Last, the Frog is the only one model using the ORV chassis buggy variant (the Subaru Brat and Lancia 037 not being buggies). But it was then used to develop a new kind of vehicles that became extremely popular in 1986: the Monsters or “Big Wheels”. It is worth to mention that this concept was first created by Marui with their Big Bear around 1984-85, but it only became very popular when Tamiya released their Blackfoot in 1986. The Blackfoot will immediately be successful and lead this new market: this model is among Tamiya's best sellers of all times, and the starting point of an impressive model lineage. 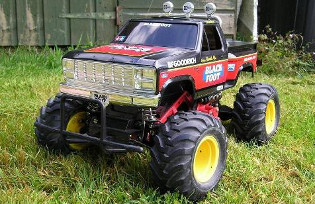 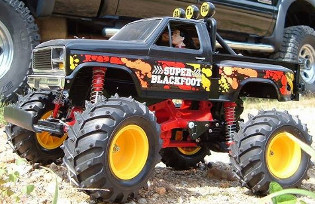 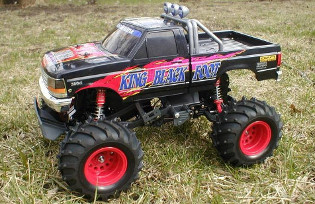 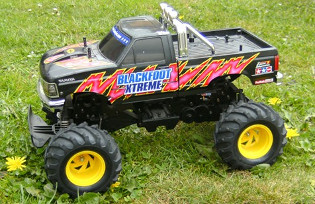 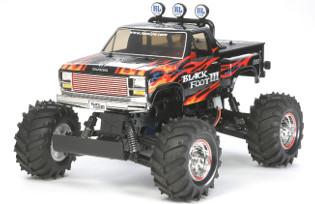 The Blackfoot is very important for Tamiya: the first generation was a tremendous success and it actively participated to the off-road craze in the 80's. In addition, one generation of this model has been made continuously available since 1986 up to now. Unique.

The first generation of the chassis was also used by the Monster Beetle, another best-seller at the time, especially because of the iconic Beetle bodyshell and the shiny golden rims.

Video of my Monster Beetle

Conclusion on the ORV platform

The ORV platform is a major buggy design change for Tamiya:

The major drawback on this series is the gearbox weakness when it features a differential, that is with the Frog and the first generation of monsters: the motor power and/or the size and weight of the big wheels would bend the gearbox metal housings. The models that suffered the problem are the Frog (with powerful motors), the Blackfoot, Monster Beetle and Mud Blaster. The next monsters using the ORV platform will use a totally new gearbox that will remedy the problem at the cost of an entirely new rear drivetrain architecture.

Strategically, this platform is among the most important in Tamiya history. Indeed, it is the commercial starting point of the buggy craze in the eighties. The Grasshopper platform for entry-level market, then the Hotshot in 4WD buggies will soon complete Tamiya offer and lead the RC Golden Age.