The name of these chassis mean Special Racing Buggy, but this never was an official naming despite the mention on the manual, the box and the radio box (except the Holiday Buggy and Sand Rover). In fact, Tamiya will start naming their chassis much later.

The SRB platform is among the most iconic from Tamiya. It started back in 1979 with the Rough Rider and lasted up to 1982 with the Super Champ which is the lastest evolution... before Tamiya offers the re-release of several models of the series. An economical version of the platform also equipped two more vehicles, the Holiday Buggy (kit 58023 in 1980) and the Sand Rover (kit 58024 in 1981), even though Tamiya never linked them to the SRBs. 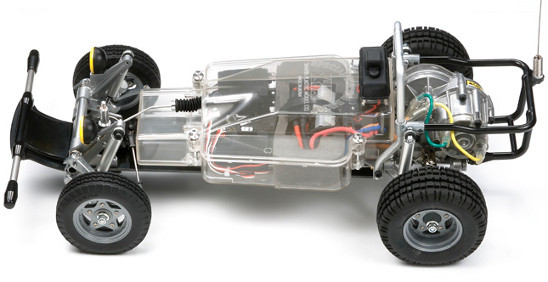 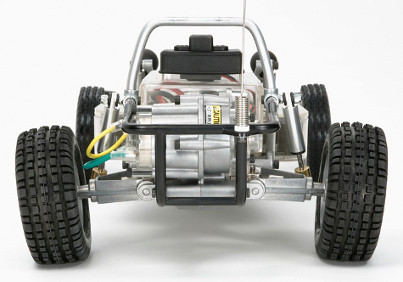 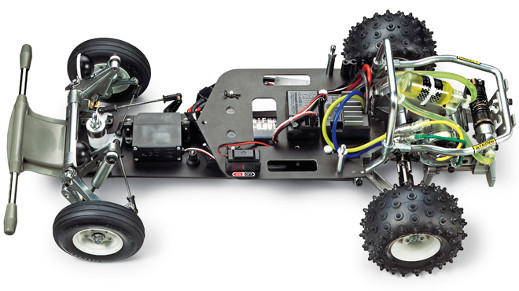 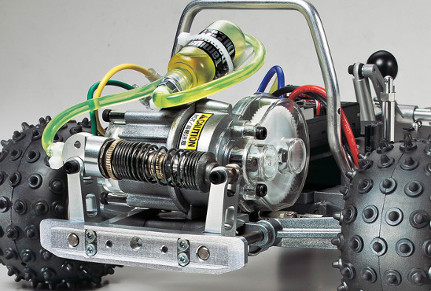 These photos belong to the models re-released in 2009 and on: they depict the chassis overal architecture and the characteristic rear drivetrain geometry, the second version belonging to the sole Super Champ. Original versions were almost identical to the re-releases, the differences being details not covered in this article.

The SRB series counts the 4 models displayed below, all being original versions: 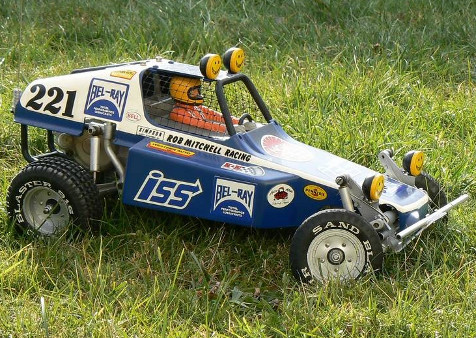 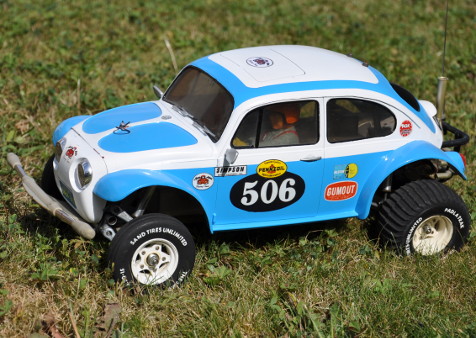 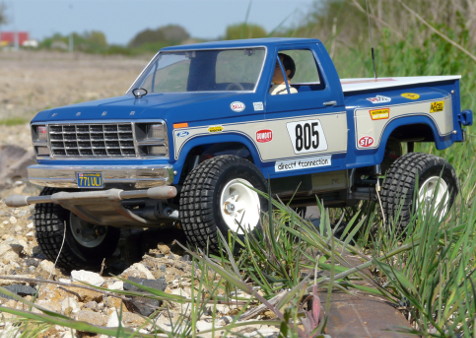 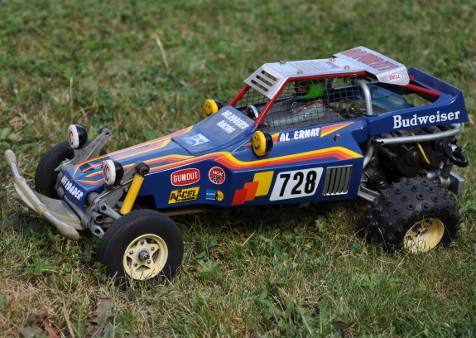 Apart from the Super Champ on which delicate components were protected by balloons, the models feature a waterproof radio box. This, among other characteristics, allow them to run any terrain, especially the beach. As a matter of fact, the beach is their perfect playground because of two major downsides:

The advantage of the lack of differential is an overall solidity and excellent motricity, the disadvantage being the delicate handling over high-grip surfaces. In addition, the rear drivetrain suffers consequent camber angle: the bottom of the rear wheels is farther out than the top as depicted by the photo off the first version of the chassis. This is due to a specific drivetrain geometry: the link between wheels and chassis is a solid axle and not a turnbuckles. The consequence is the wheel movement is only vertical. So tires are fully efficient when the suspension is compressed, leading to a poor overall rear drivetrain grip since the tires naturally only have a contact with the ground on their exterior side.

Other videos of these models can be watched on my Youtube channel.

SRBs are models tailored for the beach and the sand, just like the real-size vehicles they replicate (except the Ford Ranger). But they are great on mud too, including the ever-attractive puddles.

But the SRB series does not only count these 4 iconic models because in 1980, Tamiya will offer an economical version of the SRB platform: 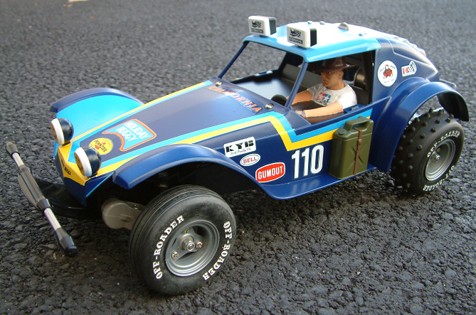 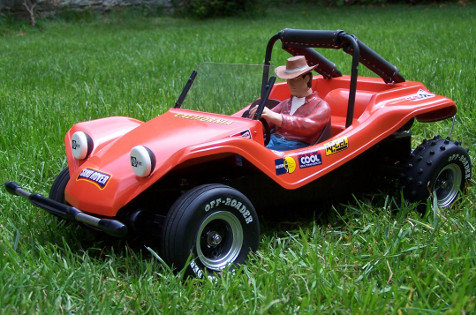 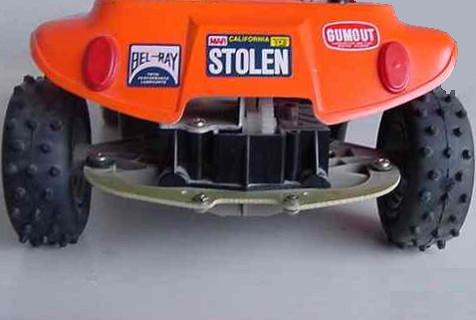 The SRB expoy chassis and waterproof radio box are replaced with a bathtub chassis, the gearbox is simplified and the motor was downgraded to a Mabuchi 380. The camber angle and the lack of differential are still there and the rear suspension was replaced by simple rubber tubes placed between an epoxy plate and the arms. So, the epoxy flex is the suspension. The SRB drawbacks are kept when not amplified, but a worse one shows up: the open air gears./p>

So the Holiday Buggy and the Sand Rover are perfect for running at the beach, preferably where the sand is flat in order not to demand too much to the suspension. However, it is wise to first warn all grains of sand not to get into the gearbox gears because they would melt them in minutes. Anyway, these two “beach” models are pretty sought after because of their oustanding bodyshells and their highly detailed and realistic drivers.

Conclusion on the SRB platform

Tamiya's second off-road platform is a masterstroke despite being quite new in the business: the SRB models are a huge success, both with the general public and the period racers. The market is already showing the first signs of the 1980's off-road craze, a period when Tamiya will write very important pages in their history, and in RC history in general.

To properly understand the SRBs, you need to replace them back into their period context: by the late 70's, mainly thanks to Kyosho, an electric-powered buggy is mostly a converted gas-powered buggy. Because manufacturers do not bet yet on electric models, they prefer the safer way of converting existing gas-powered models, explaining the heavy and not very fast models at the time. Electric-powered models are still quite new at the time: for good measure, remember that Kyosho only converted their Eleck Peanuts, the first electric buggy, in 1978.

This is the context when the SRB came to the market: lighter, specifically designed for electric power and not converted from an existing gas-powered model. The SRBs immediately become the best buggies available: lighter, faster, performing better (especially the suspension), they were the champions of every race at the very beginning of the 80's. The SRBs were the kings of the tracks everywhere in the world, until 1982 when Kyosho released their Scorpion buggy: suddenly, the SRBs were outdated and outperformed. And then the Scorpion became outdated and outperformed too two years later because things were moving fast at the time.

The Super Champ SRB “version 2” chassis shows some of the radical modifications racers made at the time to improve the handling and performance. Some manufacturers even specialized in replacement parts for the SRB, leading to such modifications that “race prepared” models only kept the front and rear (modified) drivetrains. Somewhat like this model, for example, that belonged to Old Fella from Tamiyaclub: 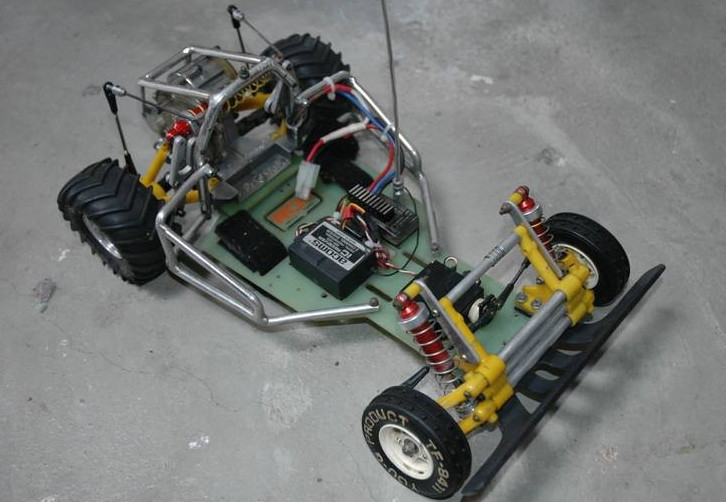 A pure racer, the best at its time, before a newer and better one was released.

As for the Holiday Buggy and Sand Rover economical SRB version, they sold very well too, even though not many survived up to now. The culprits were the open-air gears that couldn't resist long from debris aggression when off-roading, a chassis weakness at the front and the outstanding bodyshells that were easy to break.

The SRB platform as a whole was very successful for Tamiya, despite being the first buggies they ever made. These models will actively participate to the starting buggy craze that will take place all the eighties long.