This platform has no name, either official or not: so I called it Falcon, by the name of the first model to use it. It counts three generations and 7 models: the first was one of Tamiya's best sellers. The second sold quite well too, but its popularity with collectors and the general public 30 years after is close to null. The third generation is about the success of only one of the models, but it was when the RC market turned into the Touring craze.

About the family link between the 3 generations, it is commonly accepted among fans concerning the first and second generations. As for the third, opinions differ: as for me, because the main chassis bathtub is identical, I consider it as an evolution of the platform, just as it previously happened in Tamiya models history. 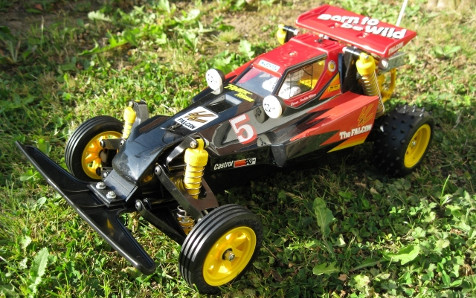 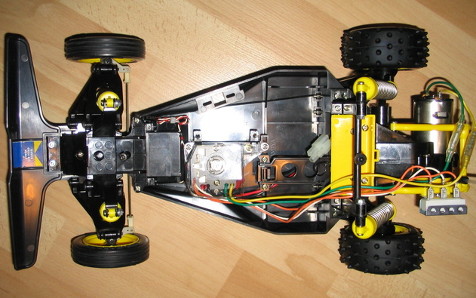 The Falcon in action 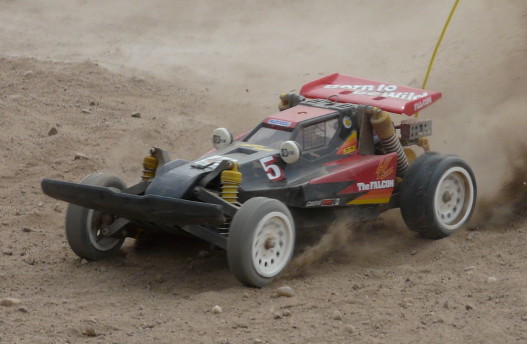 Promotional video of the Falcon (© Tamiya)

The Falcon aims at the leisure market, as the only two available gear ratios prove. This buggy handles pretty well, it is fast and well suspended: at the time, it was a huge success among beginners or people who already knew the Frog, Grasshopper or Hornet and willing to get a better model. Its only drawback is some weakness at the front end, the junction between the front drivetrain and the chassis bathtub: it would break after too many shocks or bad landings. However, it was quite simply to repair and reinforce this part: even if the repair was rarely nice looking, owners could keep running and enjoying their car.

The second generation was released in 1987. In fact, it was an economical alternative to the Falcon: the rear dampers are friction units and the front ones are borrowed from the Grasshopper. The ABS bodyshell is quite unusual: it looks like... well, Tamiya announced it as a “Formula 1”. A few months later, the Sonic Fighter was released featuring 4 hydraulic dampers which benefited the chassis handling. This time, the bodyshell was announced as a “jet fighter”. 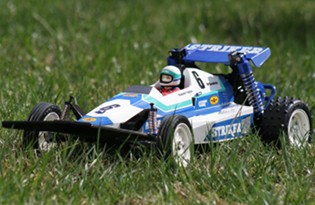 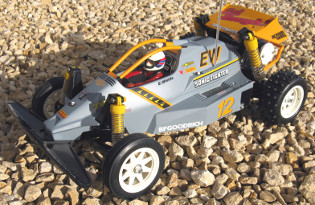 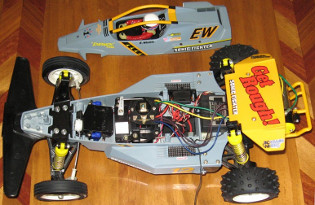 Promotional video of the Striker (© Tamiya)

If you consider the Striker and Sonic Fighter as successors and evolutions to the Falcon, then they are a fail. Hopefully, they were not: this second generation is an economic complement to the Falcon offer. In other words, cheap Falcons... so they did not perform and handle better than the Falcon. As for the bodyshells, they might hurt the eyes, but they had no negative influence on sales: actually, these two models, especially the Striker, sold pretty well at the time. Of course, not reaching the Falcon sale score, but they definitely were successful among beginners. As for the bodyshells, remember the 80's (if you're old enough) or watch movies of that period: honestly, people dared a lot at the time, so “Formula 1” or “jet fighter” buggies were OK

The third Falcon generation was released in 1991 with the kit 58093 Bear Hawk when Tamiya is about to put the RC market head over heels. The buggy version will be unique, but Stadium Truck versions will reuse it soon. 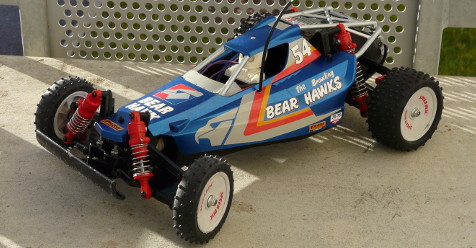 The Bear Hawk at the track 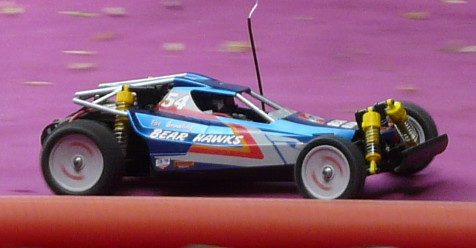 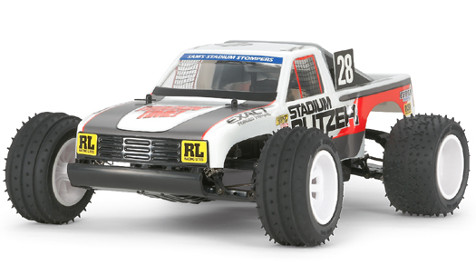 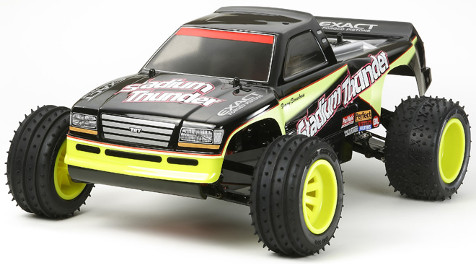 Video of my Bear Hawk

The Bear Hawk is an entry-level 2WD buggy using the red friction dampers borrowed from the Madcap, as well as the Madcap wheels changed to grey color. The Bear Hawk bodyshell will be reused about 10 years later: just adding a rear wing, Tamiya will place it onto the Mad Fighter.

The Stadium Blitzer and Stadium Thunder allow Tamiya to step in a new Stadium Truck category which is quite popular in USA because of Associated. Despite the collectors not being very interested by these models, they were produced for quite a long time, which would mean they sold well.

But the most successful model of the series is the Blitzer Beetle, fitted with the third version of the very popular Volkswagen Beetle bodyshell, after the 1979 Sand Scorcher and the 1986 Monster Beetle. Apart from the chassis performance in this Stadium Truck flavor, the bodyshell is the reason for the success. Tamiya will even release a chrome metallic bodyshell version in 1999. 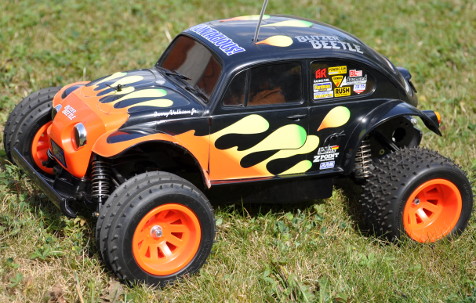 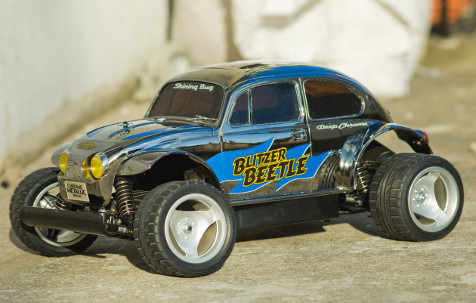 This Chrome Metallic version is the pinnacle of the very popular Blitzer Beetle, probably the a version made by Tamiya to offer the fans an ultimate rare object to collect... unless it was an elegant manner to deplete stocks.

Conclusion on the Falcon platform

Again the question of platform starting with the Falcon up to the Stadium Truck version may not be shared by all collectors. Nonetheless, the fact is “The Falcon” marking can be found on the Blitzer Beetle chassis: I consider this to be sufficient, even though the different “generations” introduced many modifications to the original chassis design.

As for the Falcon, it is one of Tamiya's all time best seller. The economical versions sold well, despite looking so old-fashioned as per today standards: they got in many beginners' hands at the time. I personally know one of them (he knows who he is

) and the Striker recalls him memories of great moments... including his first repairs.

The Bear Hawk was not very popular even though it is a pretty good buggy once you fit hydraulic dampers to replace the friction units. At the time, competitors are the better performers called Madcap and Astute and then came the Touring craze. It is not easy to know if the Stadium Truck versions where popular since this category was not very popular in Europe, but (at least) in USA, it seems they were. The Blitzer Beetle is one exception: as soon as Tamiya fits their Beetle bodyshell on a chassis, the model is successful.

In the end, the Falcon platform was promised to a nice future when considering the tremendous success of the Falcon and the good sales of the Striker and Sonic Fighter. Instead, it pretty much disappeared, or better said, it was swept out by the Touring craze: somehow, the Bear Hawk is the perfect example of the massive buggy extinction that happened at the beginning of the 90's. But the Bear Hawk will survive almost 10 more years in the form of the Stadium Truck variant.