This was a great opportunity, so I offered myself this present! This model is the last one to use at least partially the iconic “space frame” chassis from the Subaru Brat and Frog (apart from re-releases). Because of this, the King Blackfoot is somewhat important in Tamiya range of products.

The Blackfoot is an iconic model from Tamiya, a series that began back in 1986 and it remained active up to today thanks to several generations of models: 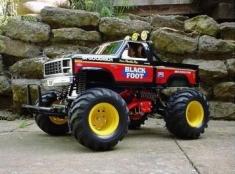 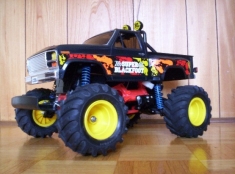 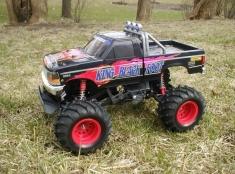 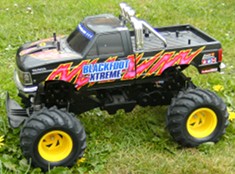 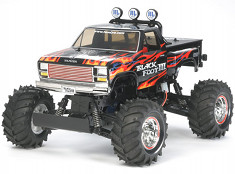 25 years! The Blackfoot saga started over 25 years ago. It is still going on since the last model of the lineage is still in production as per 2015 with the Blackfoot III released in 2011. As far as I know, such a lifetime in RC modeling has no equivalent in any other brand catalog. Of course, the model evolved all these years long either to improve conception weaknesses or to keep it up to date.

It is based on the Subaru Brat (58038) chassis, uses the Frog (58041) gearbox with different spur gear and motor pinion to handle the big wheels used on the Toyota 4x4 Pick Up Bruiser (58048). A vertical tower was added to the front of the chassis to make room for a better suspension system than on the Subaru Brat / Frog chassis. The bodyshell is the same as the one on the Ford F-150 Ranger XLT (58027) slightly modified and with a different sticker set.

First evolution of the original model: the chassis remains the same, but the rear drivetrain is an entirely new design.

On the original model, constraints induced by the big wheels made the hex driveshafts and differential satellites prone to wear, and caused the gearbox metallic side plates to bend. The front shock tower was also weak: it could easily break when the suspension had to work hard.

The Super Blackfoot brings improvements over its predecessor: the hex driveshafts are replaced by dogbones. The gearbox is a totally new design and the metallic side plates are replaced by solid plastic housings. At the rear, a double wishbone suspension system replaces the original one which means dampers are now mounted vertically. The front shock tower is also modified. Tires are now the spike ones of the Monster Beetle (58060) and will be used for the next generations.

The bodyshell remains the same as the Blackfoot's except a slightly modified front grill design, different stickers... and absolutely no reference to Ford (no brand sticker, no model reference).

Second evolution of the original model: no major modification on the chassis central frame.

The front suspension system is new with longer arms, a double wishbone suspension and a front shock tower modified again. Trivia: the King Blackfoot is the only one wearing red rims instead of the yellow ones for the rest of the lineage.

The bodyshell is entirely new: still based on a Ford model, it is now the replica of an F-350ci (no more F-150) as per the stickers. Though, the Ford logo doesn't show on the sticker set.

Third evolution of the original model: the chassis is totally new in the Blackfoot lineage. It now uses an entirely new chassis that will later be called WT-01. This new chassis is shared by several other models, but the Blackfoot Xtreme remains the only one using an ABS bodyshell.

The bodyshell is the same as the King Blackfoot's apart from details: a redesigned front grill, and a new set of stickers. It also specifies an F-350ci Ford model but the Ford logo is still missing.

It was released, a little bit more than 2 years after my guesses based on the lineage history. The chassis is strictly identical to the previous generation's and the bodyshell borrowed from the 1992 Super Blackfoot receives a new decoration. Considering how important this lineage was inTamiya's catalog, I think the new version is disappointing because it brings nothing new. Of course, the bodyshell reminds memories despite the new decoration makeup, but the soul-less Blackfoot Xtreme chassis turns the myth into common. A few months later, the myth was killed when the Mud Blaster II and Bush Devil II were released, suffering the same treatment: common chassis plus original bodyshell dressed with a modern decoration.

Unfortunately, I think the Blackfoot lineage has now lost any interest. The myth already suffered from the so poorly original Blackfoot Xtremechassis. In addition, the Blackfoot III now faces the Mud Blaster and Bush Devil resurrections that alter its unique character in Tamiya's line-up. Difficult to guess the future of the Blackfoot: if it still has a future, I think that it will need to restore its unique character, which means a chassis good enough to be considered as a decent successor of the iconic Frog "space frame".