We saw it, each component of the power line in an RC model has voltage limits, both coninuous and peak, from the battery pack to the motor, the plug and ESC (when these values are known). As it happens, crucial information is omitted by manufacturers, when they don't go as far as deliberately lying to make their products "better for sales".

Only them seem to have only "continuous" limits, and by the way, that limit seems ridiculously low compared to what other components claim. Since it is the motor that drains the power, we can feel safe considering other components specifications.

Unless... manufacturers lie about the values, more precisely, they purposefully omit one value. First, the "Max Amp" value on motors means max power drain "at load"... but this is not the maximum the motor can drain! As a matter of fact, "at load" means "when the load and motor rpms (revolutions/minute) are balanced at the maximum output of the motor". Translation? The value provided by manufacturers is a value under "normal" conditions (gear ratio suited to the track, perfectly working gears, reasonable motor timing). However, when pulling the trigger brutally or for a full throttle start, the motor power drains go far beyond the announced value when conditions don't keep close to "normal". The proof of this? Here are the specifications of a brushless combo from the only one manufacturer (to my knowledge) who really tells the truth about what he makes: 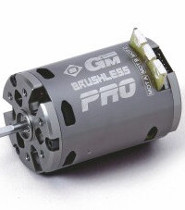 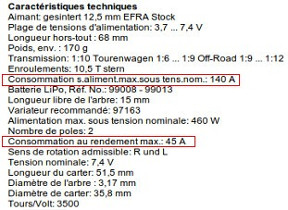 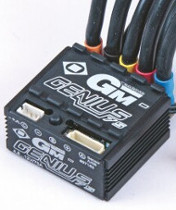 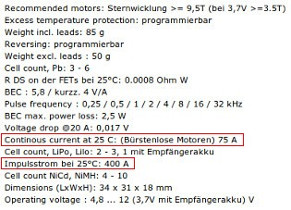 OK, what we've got here is a brushless combo from GM Racing: the 97285 E (10.5T) motor with its recommended 97163 Genius 75 ESC. Ô dear, the motor is rated 45A max with peaks up to 140A and the ESC is rated 75A continuous and 400A burst. Nevertheless, the GM Racing combo is perfectly coherent. Problem: GM Racing is the only one manufacturer that I found to communicate all due values.

Are all brushless motors manufacturers (except GM Racing) dishonest and putting us in danger knowingly? Yes. And no

The lack of communication on motors current peaks is dangerous because the motor is the key element for sizing correctly the rest of the link up to the battery pack. Indeed, when the motor drains current, the ESC needs to be able to handle the voltage and the battery pack to provide it (both continuous and "burst" features). Otherwise, the battery pack will have to provide a voltage over it capacities, which will definitely damage it (puffing). This is the under-sizing problem we will talk about further in this article.

Actually, except extreme conditions (unadapted gear ratio for the track + jammed gearing + insane motor timing), a motor claimed at 45A continuous will never reach the 140A peak (still, it is capable of that). However, it is reasonable to consider that this same motor claimed at 45A continuous could reach the 90A peak mark under certain conditions, which means that it is safer to pair it with an at least 60A continuous and 120A peak ESC, and with a lipo battery pack meeting at least the ESC specifications.

You got it, battery packs have to supply the motor voltage drains. The maximum voltage a battery pack can provide is the result of the equation between the cells capacity in A and their discharge rate in C. It is difficult for manufacturers to lie about the mah capacity of their products since it is pretty easy to detect false values. The only one factor they can play with is the discharge rate, the C value: in fact, it is the manufacturers marketing department favorite toy to race the crazy world contest of the most "powerful" battery pack.

Want more? I found 2S 8000mah LiPo battery packs claimed at 150C(!). OK, they are made of 2 packs of 4000mah wired in parallel (so the whole battery pack capacity is doubled), but the claimed discharge rate is 150C: here, we are talking about 1200A! «I love the smell of napalm in the morning.» (Robert Duvall, Apocalypse Now).

Overall, late 2014, serious people unanimously admit that no LiPo battery pack can long-term resist to over 30C continuous current. With a 6000mah, which is counting among the "big ones" on the market, we are already talking about 180A continuous. So be my guest and estimate by yourself the crazy stupid factor some manufacturers use to multiply Cs on their battery packs labels. What? Are they dangerously insane? Of course not... but wait a minute, I still have to tell you something about wires

If I mentioned the wires specifications for the two battery packs I took as examples (don't worry, there are plenty of others like these), it was not for any decoration purpose. Even if you don't know much about electricity, of course you already noticed that your biggest household appliances used bigger cables than the small wires in a torch lamp. As per logic, this would mean that the more powerful the device, the bigger the electric cable. Yes. The proof:

I borrowed this table from PowerStream where they specify that all data is estimate and based on nick(el)-free soft annealed wire having a tensile strength of 37000 pounds per square inch (which is the kind of wire found on about any battery pack). Let's go for some explanations: there are two main standards in electricity: the metric unit and the AWG, the American unit based on the archaic British imperial system. No problem here, both units are used in the table. Here, the most interesting columns are the AWG gauge (1st arrow), the wire diameter in mm (2nd arrow) and the maximum voltage in A the wire can take in continuous (Maximum amps for chassis wiring, 3rd arrow).

Of course you remember what we saw about the plugs? Roughly, 4mm plugs can take up to 60A continuous and they need to go up to 5mm to reach the 120A continuous. In you can't find these values in the table, it is because plug connectors are not made of copper and generally contain gold which is a better electricity conductor. So, 4mm connector in a plug can take more voltage than a copper wire of the same diameter.

. The connectors contain gold, so a 4mm connector can take 60A continuous, and 4mm diameter wires (AWG 6) can conduct about 100A continuous voltage.

Wait: since when can we insert a 4mm diameter wire into a 4mm connector? Well, the wire needs to be slightly smaller than the connector. I almost forgot, one more thing: the protective sheath doesn't count. Damn it, when taking measures on my battery pack wires, it says 2mm... that is 41A. Normal, I'm talking about the AWG 12 wire of my 100A continuous GensAce series 8 4000mah 25C battery pack. Wow wait, 100A on a wire that can only take 41A.

Just for the fun, let's have a look over the "super" 90 or 100C continuous discharge rate battery packs: AWG 10 which are 55A for the wire compared to the 648A of the pack. On the other one? 5mm so not even 135A for the wire compared to the battery pack 740A. Crazy people! For your information, you normally need something like a 185mm² wire to conduct 600A continuous on about 20cm length (the total length of the red + black wires): that is a wire with a diameter of about 15mm, or 1.5cm!

Conclusion: manufacturers think we are idiots

Motor manufacturers, for starters, for not publishing the maximum power drains of their motors (except GM Racing to my knowledge). This is being very irresponsible since the motor is the one element that should prevail to determine the power required by all other elements.

Battery pack manufacturers mostly, some of them at least, because their shameless marketing "engineers" publish insane technical data that neither the wires or the internal cell connectors can resist. Even though only 35 to 40 seconds suffice to dry a 7400mah pack at a 740A discharge rate, it is more than enough to melt the inner elements of the pack and the connection wires which are not sized to conduct such an insane voltage. From this, only two conclusions: either the cells can truly provide the claimed discharge rate and then we should ask a manufacturer marketing "engineer" to make a live demonstration of it (without fireproof equipment), or these manufacturers are pathetic and criminal liars. In both cases, these idiots (to say the least) deliberately put our lives in danger.

In the real life, a 2S 7400mah LiPo pack with a continuous 740A discharge rate can NOT exist.

In addition to being liars, some manufacturers know very little about their job since what they pretend is impossible, and it's not just me. As per the laws of physics, under a voltage of 740A, an AWG 10 (5.26mm² ie 2.59mm diameter) can theoretically resist for... 1.03 second!

. Moreover, every LiPo battery pack (this applies to LiFe too) has a built-in fuse: it will fuse immediately under these conditions... unless its quality is at the same bottom level than these manufacturers honesty. In both cases, expect the firework.

As a matter of fact, if I spent time to detail the technical data of all these elements and to demonstrate the lies and the incredible contempt of many manufacturers regarding our security, it is because the Lithium battery technology is potentially dangerous if not used correctly.