Long before the “ecologist” frenzy invaded our lives, long before Toyota even had the idea of their Prius, radio-controlled models already used electric power for years.

From the very first electric RC model, the question of "batteries" raised for powering our models. This question is not new since the first mass-produced electric RC car hit the market back in 1965: it was the Porsche 904 made by Hegi (Germany). Before that, electric-powered radio-controlled toys already existed: they were generally made in metal, they were also very scale-realistic (like the truck below) and very expensive, but they were not made "to race". 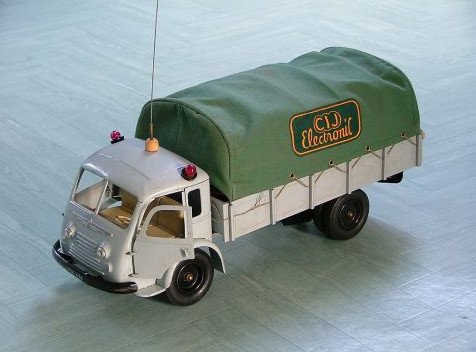 © Julien from Vintage-RC, can be seen here and there 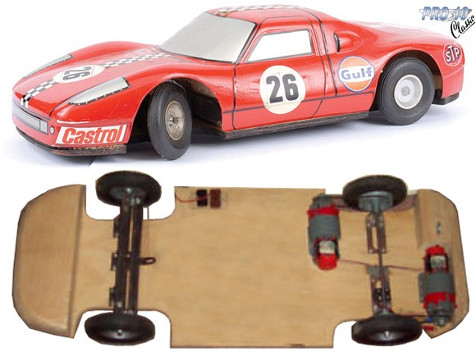 So electric RC is over half a century old, even though it only became more widely available to the general public during the 80's (which is not that recent either

). So, we are going to briefly overview the history of different "electron power-plants" before detailing the current offer.

By the end of the 70's, the first "democratic" electric RC models hit the market with noticeable commercial success. By then, the market is still very small, thus the use of the existing and common 1,5V dry cells and sometimes rechargeable 1,2V cells (Ni-Cd, see below). The mostly used format at the time is UM2 (now known as LR14) as you can see on Tamiya's first RC Guide Book presenting the world famous Porsche 934 Turbo RSR: 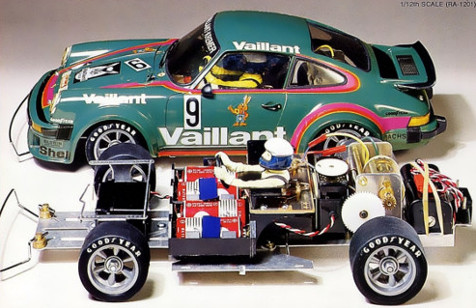 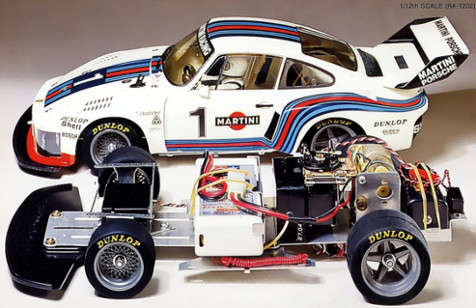 You will also notice the battery holder located at the rear of the chassis: it is used by four 1.5V dry cells (or 1.2V rechargeable) to power the receiver and the servos. On the second photo (Tamiya's second RC model), a rechargeable battery pack has already replaced the separate elements that were used to power the Porsche 934.

Before talking about Ni-Cd batteries, one word about this 1.2V value that will literally define electric power in every RC model up to today:

What we've got here are the voltage values we are still using in our RC models: most servos and receivers can operate between 4.8V and 6V and most Ni-Cd and Ni-MH battery packs operate at 7.2V (some operate at 8.4V).

As we just saw, dry cells were quickly replaced by battery "packs" dedicated to our models. At the beginning, these packs were often available from RC manufacturers, probably in response to the lack of a dedicated market offer. One note: we say Ni-Cd for nickel-cadmium. They are commonly called NiCad in reference to the brand of the French manufacturer SAFT.

Despite their high cost compared to dry cells, the first Ni-Cd batteries (elements or packs) already had a very important characteristic: a superior discharge rate. This rate is important, as Tamiya proves in their 1977 Catalogue when providing the information of the Porsche 934 top speed depending on the battery type: 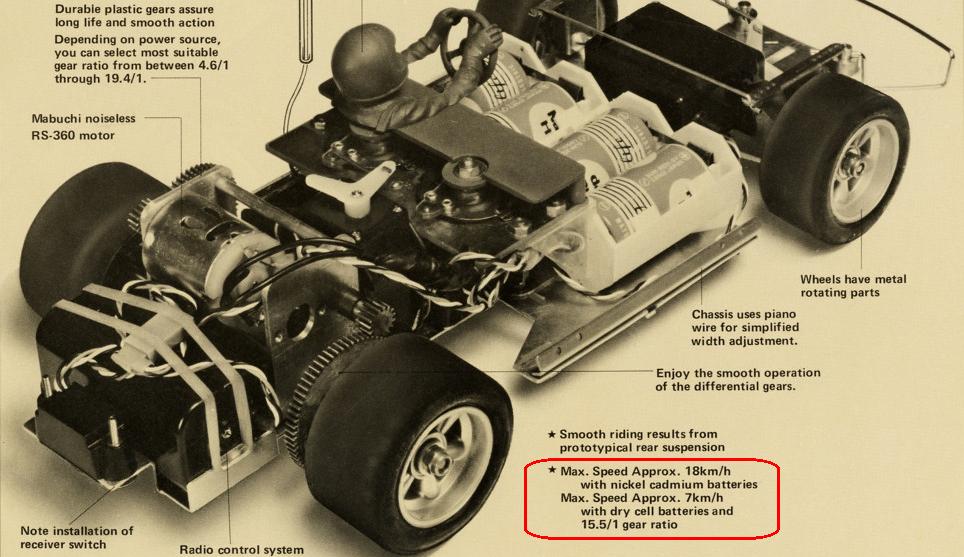 The difference is something... We will talk later on about the discharge rate.

Electric RC is still at its debuts in the late 70's beginning of the 80's: depending on models and chassis architecture, the manufacturers sometimes adapt the battery pack shape according to their needs because no real standard has emerged yet. In parallel, a sixth element is often added in order to add more voltage, which means more performance:

In the above image, the rectangular-shape pack in the center has 5 elements: this is Tamiya's first battery pack. Its dimensions will have a direct influence on chassis layout for almost 10 years.

At the left, the famous "hump pack" introduced with the Rough Rider SRB chassis in 1979: it features 6 elements for a 7.2V voltage output. This specific layout of the elements allows the same "footprint" as the previous battery pack, which makes it compatible with existing chassis (when the additional element clears the bodyshell).

At the lower right, the 3Speed chassis "high capacity" with an autonomy close to 30 minutes of runtime: it is specific to these models and non compatible with other chassis. The "hump pack" can be used with the 3Speed chassis, but autonomy drops to about 6-8 minutes.

At the right upper corner, the format that became the industry standard: the 6 element stick pack that we still use. In Tamiya's range of products, it made its first appearance in 1982 on the 58032 Tornado RM Mk.3 kit before it progressively became the unique format used for all models (except existing chassis bases).

A word about NiMH (nickel-metal hydride) battery packs: they progressively replaced the Ni-Cd packs which were considered "diabolic" from the beginning of the 90's. The extinction of Ni-Cds is mainly due to ecology: the lead and cadmium they are made of are extremely polluting heavy metals. In addition, the lazy battery effect is also mentioned as an argument against Ni-Cds (decrease of the capacity): this argument is at least questionable, if not a lie. Everybody taking care of their battery packs could verify by own experience that both battery types are equally concerned by the problem. Last argument in favor of the NiMH technology: a superior capacity compared to Ni-Cd. True, modern NiMH feature greater capacities than Ni-Cd... that are 20 or more years old.

What is rarely mentioned though, it is that NiMH lifetime is only half the Ni-Cd's (in number of charge/discharge cycles at equivalent element quality).

Conclusion: if you still have functional Ni-Cd battery packs, keep using them. They already lasted much longer than any NiMH can last, and will probably still last longer than any brand new NiMH pack. However, do consider to properly dispose of them for recycling when you decide to no longer use them.