An Electronic Speed Controller (or ESC) works using transistors (called FET) which role is to slice the constant current from the battery pack into impulses. These impulses are separated by pauses during which no current is supplied: the longer the pauses, the more the motor gets voltage. The impulse frequency is controlled electronically, which offers the progressiveness MSCs were lacking. Another advantage of ESCs is autonomy ("battery life"): in fact, the job of the ESCs is to frantically switch the motor "on" and "off" (thousands of times per second), thus switching "on" and "off" the battery. So the battery is used "on demand" and no longer in continuous with partial heat dissipation of the unused current like with MSCs. The result is a much greater autonomy (or battery life, again).

Tamiya first ESCs were combining the radio receiver: none of them was supplied in any kit box though. The first mention of an electronic speed controller can be found in the manual of kit 58067 Thundershot from 1987. The device was a C.P.R. Unit P-100F capable to handle motors down to 17 turns. Soon after, the C.P.R. Unit P-160F handled motors down to 12 turns. A more economic version called C.P.R. Unit P-80F (motors over 23 turns) was also released before the last device called CPR-01 (27 turns) was supplied with XB models. Reference of this last CPR unit can be found in about every manual of the TT-01 chassis and TL-01 chassis based models. We will discuss further on the question of "turns" when applied to motors and ESCs. 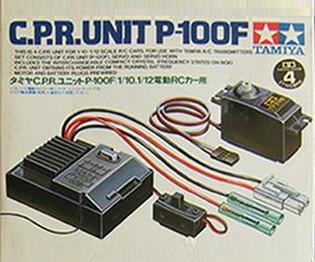 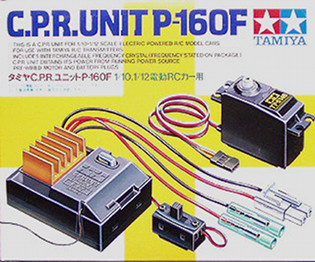 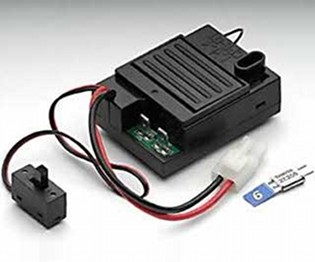 Several years later, Tamiya will remove the receiver part and will progressively supply ESCs in all their kits. The TEU-101BK is probably the best known ESC from Tamiya, both due to its massive diffusion starting in 2004 and thanks to its great reliability and its easy user-friendly setup. 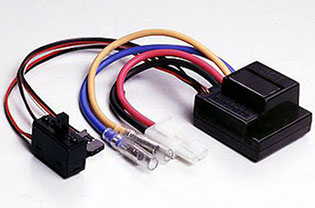 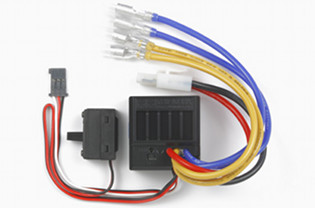 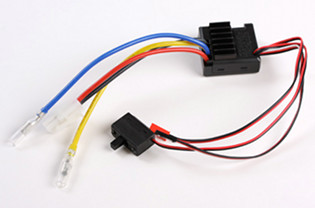 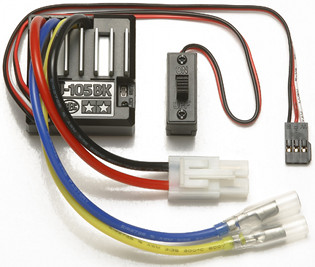 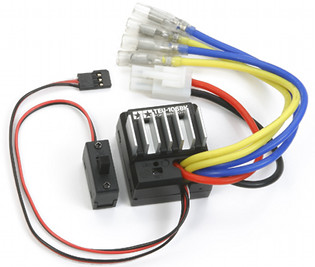 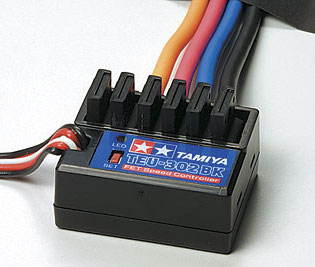 (*) Officially, the TEU-302BK is not BEC compatible (you can't find the logo on it). However, its technical caracteristics show that the receiver output voltage is 6V. As long as the battery provides at most 7.2v / 7.4v, then the receiver and the steering servo should be OK.

It is important to know, to understand and to respect the ESCs specifications since using them correctly will preserve them, preserve the models they control, and most important, they will help you safely enjoy your models.

Originally, every RC model had to carry a battery box dedicated to feed the receiver and the servos (steering and throttle). The BEC system allowed to eliminate this heavy and bulky pack of batteries (at least on electric RC models). However, receivers and servos only bear voltage between 4.8V and 6V when battery packs supply 7.2V. So the BEC serves as a voltage regulator to feed the receiver and servos with the correct voltage, independently of the battery pack voltage. On Tamiya first models to benefit from it (the Hotshot in 1985), this device was integrated into the switch. Further on, receivers and/or controllers integrated this system (at least one of these two components needs the BEC in order to preserve the servo(s) and/or the receiver).

Today, the BEC is still important: while the vast majority of AM or FM receivers had the BEC system (so having the BEC or not in the controller was not critical), 2.4GHz receivers do not have BEC. For example, in a model equipped with a 2.4GHz receiver and a TEU-101BK controller, the receiver and the steering servo are supplied with the battery pack 7.2V voltage. In concrete, it works thanks to the tolerance of the components... until the day the may send smoke signals.

The solution is to use the 45051 BEC Regulator TRO-01 or any other external BEC system (also called UBEC). Or to use a "high voltage" servo that can be fed up to 7.4V, but they are rare, generally very expensive, and they don't solve the receiver voltage problem.

This is the question of motor turns: the less T, the faster the revolutions per minute (rpm) and the faster top speed. However, the faster the motor turns, the greater energy it needs, energy that is supplied by the ESC and the battery pack. The voltage measures in A (amperes): this value not being the best known by users, manufacturers generally use the Ts instead since it matches the motor turns.

In concrete:
The TEU-101BK / 104BK / 105BK speed controllers can handle Tamiya motors such as 30T (FL-Tuned), 28T (Lightly Tuned), 27T (Mabuchi 540, Dirt-Tuned, Sport Tuned) and 25T (Torque-Tuned, GT-Tuned). However, these ESCs may eventually overheat when using 25T motors or the Sport Tuned under some circumstances: gear ratio not suited to the track layout, track offering high grip conditions (grass or carpet for example). This especially happens when running several battery packs in a row (which is not recommended: time should always be left for the motor and the ESC to cool down between runs). On the opposite, you may find comments about people saying they just run fin with a 19T motor and their TEU-101BK: assuming this is true, this can only work in optimal condition and at the very limits of the ESC potential. So it is probably true, but not recommended: besides the risk to damage the speed controller, is there anything more frustrating than getting one's model stuck at the track due to an avoidable failure?

The A limit (Amperes)

The previous T limit is generally preferred since it makes things easier for everyone. But behind that T limit, there is the "true" A limit, that is the maximum continuous voltage the ESC can handle. On Tamiya ESCs, the A limit is 60A continuous on all the 10x ESC series (101BK, etc) and 120A continuous on the 302BK. Which translates into 25T and 17T motor limits. 120A seems to be a correct mark for 17T rated motors since you can also find it on other manufacturers ESCs (Robitronic Speedstar RS142 for example).

This function is critical for the new generation LiFe and LiPo batteries: as for NiCd and NiMH batteries, the cut-off is "natural" since the model speed dramatically drops down as soon as the battery is about 80% empty. LiPo and LiFe batteries require an automatic cut-off or low voltage alarm to avoid draining them (fire risk). This cut-off or low voltage alarm needs to be performed either by an external device or by the ESC. However, you must know that LiFe batteries cut-off value is lower than LiPo batteries. So, if an ESC features a LiFe cut-off function but no LiPo cut-off, you DO need to use a separate LiPo cut-off device or low voltage alarm when using LiPo batteries. The opposite situation is not an issue (ie cut-off LiPo used with a LiFe battery) but you will not benefit from the full battery capacity.

In concrete: none of Tamiya speed controllers has a LiPo cut-off. So you do need an external device (generally called "buzzer" or "Low Voltage Alarm") when using LiPo batteries.