From their debuts, electric RC models are facing a problem: either their energy source supplies all its voltage or not a single electron comes out. In short, batteries (both dry and rechargeable) are either "on" or "off": 7.2V or 0V. This is why different techniques have been used to make the voltage vary between the battery and the motor, so the speed of our models can be controlled. What used to be rather simple at the beginning has now become extremely complex. To be more specific, understanding how modern electronic components work is way beyond what the vast majority of us can apprehend, but at the opposite, they probably never were so easy to use.

The purpose of this article is to briefly overview the history of these components and then to basically explain how they work.

First to appear on the first electric RC models, the Mechanical Speed Controllers (or MSC) slowly began to disappear as the electronic speed controllers begin to spread. However, their career in RC lasted at least 2 decades, especially on entry-level models.

Some of the mechanical speed controllers used on Tamiya models:

The first mechanical speed controller used by Tamiya in 1976 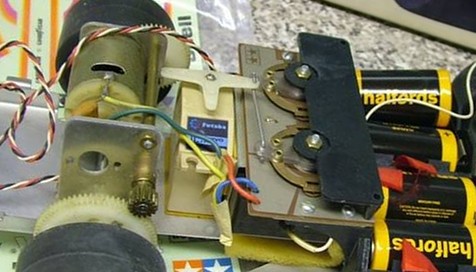 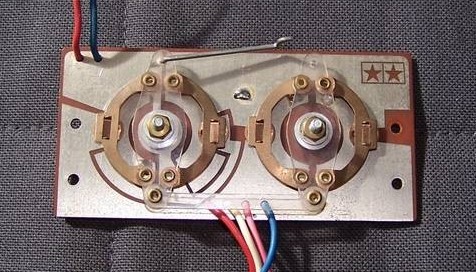 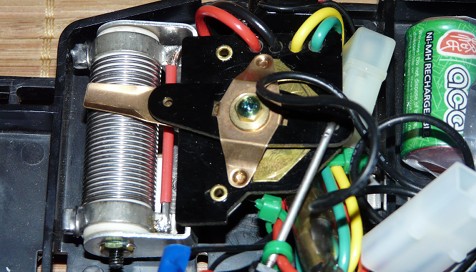 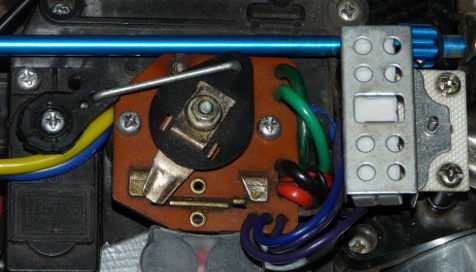 Last, two more specific controllers proving that R&D was working hard at improving the concept. The first one was supplied with the first 3 Speed model (58028 Toyota 4x4 Pick Up from 1981) whereas the second one was for the kit 58268 Mammoth Dump Truck. Both units already used electronic components, but this doesn't make them real electronic speed controllers: 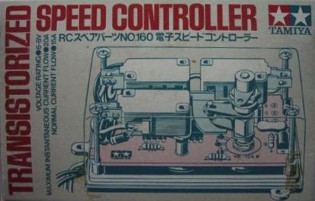 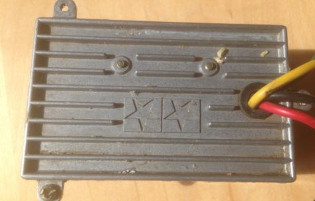 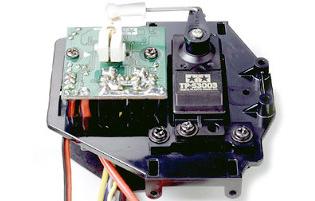 The "modern" version as on my Manta Ray is the most widely known since it was massively used in Tamiya line-up (at least until 2003 since it could still be found in the kit 58312 Blackfoot Xtreme).

Remember: a battery supplies a constant voltage (6 or 7.2V). Between the battery pack and the motor, place a mechanical speed controller, that is an epoxy plate on which copper traces are drawn. A dedicated servo drives an arm which head is in contact with only one trace at a time on the controller plate. Each trace is connected to a unique resistor with specific characteristics. The constant electric current from the battery pack is sent to the motor after passing through one of the resistors, depending on which trace is in contact. So the resistor capacity determines how much voltage the motor gets... and how much voltage is transformed into heat: indeed, all the voltage not sent to the motor is absorbed by the resistor which role is to get rid of it by dissipating it into heat.

The resistors are the well-known "sugar cubes" connected to the controller (more specifically to each trace). When the connector head is on the "full throttle" trace, the full battery pack voltage directly goes to the motor without passing through a resistor. So this also means that a model autonomy (what we call "battery life") is always the same when using a given battery pack, either constantly driving at low speed or constantly driving at top speed.

The major drawback of this device is the lack of progressiveness (also called driveability) since there are rarely more than 3 traces. Fine tuning the throttle and precision are about as great as slicing ham with an ax. Nevertheless, not forgetting that nothing else existed for years (despite the rheostat tentatives), people did have fun with them and even raced their models.

Today, apart from the lack of progressiveness (or driveability), it is highly recommended not to use mechanical speed controllers anymore due to their erratic reliability. At the time, loosing control of a model due to a stuck (or even soldered) MSC was quite common, with inherent risks for the model and the public. Besides, the connector head and the plate copper traces tend to wear with time and use, leading to short-circuits, even when using a stock Mabuchi 540 motor.