The TB-01 chassis when it arrived

What I received is in fact a second hand 58281 Ford Focus RS WRC 2001 kit, but without body, tires and motor (the body will get here a few weeks later).

The chassis I received 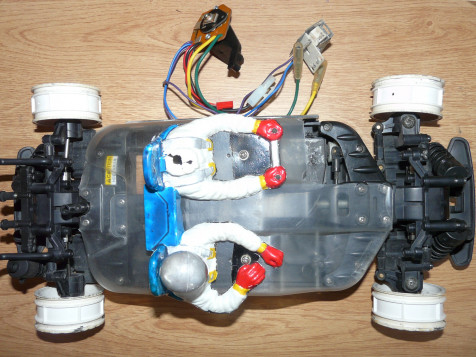 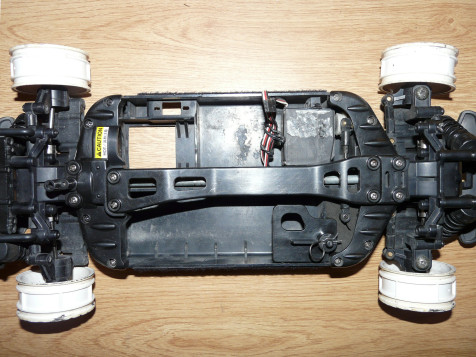 Several spare parts came along with the chassis, including a complete gear set and several spare parts. Sadly, the chassis cover has been cut in the front part (but I have a new one in stock), the rear body mount anchor is cracked which means the whole gearbox housing needs replacement (which I also have in stock). The good side is that it is fully ballraced, and the hydraulic dampers are there.

As usual, I stripped it down to check it and rebuilt it. Apart from verifying, this is a good way to learn how the chassis is made.

All the transmission part (shafts, bulkheads, uprights), motor mount, front and rear differential gears are very similar to the TT-01 chassis. Same thing concerning the steering part. Main differences with the TT-01 are on the chassis tub, especially where the front and rear gear housing link to it. On the TB-01, they are protected from pebbles and dust which not the case of the TT-01. The counterpart is a tidier access that can be a problem to quickly make changes like you may need it in competition. For leisure, there's no big deal.

Last, the great advantage of this chassis is its cover for outdoor use. It provides a good protection for the inside of the chassis and the electronic that is installed. The counterpart is a more critical heat dissipation for the motor and the electronic speed controller. Motor choice should be conservative, but the gear ratio also needs attention not to make the motor too hot.

For this, the TB-01 is pretty generous: from 9.91:1 to 5.72:1. These figures are easy to understand: they are the number of turns the motor needs to do to gear a complete revolution of the wheels. When the figure is high, the vehicle will pull out strong at start up or at low speed. When the figure gets lower, the top speed gets higher. Of course, you need to find the correct balance between top speed and acceleration as these two values exclude each other. To make it simple, the first gear of your real car makes it accelerate a lot but you don't get any top speed. On the contrary, the top speed is great with the 5th gear, but you'll need a lot of time and distance to accelerate and get it. The gear ratio is short in 1st gear (so the figure is high) and long in 5th gear (low gear ratio). The problem is that a real car has a gearbox that lets you change the ratio while driving: RC models don't have (apart some rare exceptions).

Choosing the gear ratio needs to be done when building the model, even if you can lately change it by disasembling part of the chassis. The TB-01 is provided with a stock gear ratio of 9.91 which is very short. The box contains 3 different spur gears (61T, 58T and 55T) that allow you to change the gear ratio. But you'll need other motor pinions as the kit only provides a 16T.

Choosing the gear ratio is complex and mainly depends on 2 parameters: the surface on which you drive, and the motor. For surface, it can also be the track: when it is a low speed one with lots of sharp corners, the gear ratio needs to be short. If it is a high speed track with long straight lines and smooth corners, you should set the chassis for a high top speed. Still for surface, the more grip the faster you reach the top speed as there is no grip loss: you need a high top speed. Again, always compare to a real car: you won't climb a hill in 5th gear, and won't drive in 1st gear on the highway. And you don't drive the same way on ground, tarmac, snow or wet tracks. 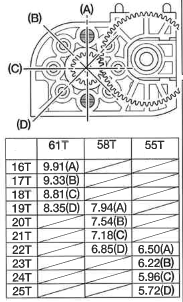 Basically, this is the theory. Practically, you have to try to find the best gear ratio based on the surface, the track and the motor. One thing you can count on: a long ratio with a high turn motor or a very short ratio with a low turn motor are the choices to avoid.

For my TB-01, I will drive it on ground and the motor will be the stock Mabuchi. So I need power at low speed and the best possible top speed. Being an "average" situation, I chose an average ratio I calculated in a very scientific manner because I'm so gifted in maths: (short ration + long ratio) / 2. I told you

. The short and long ratio values are those allowed on the TB-01 chassis (9.91 and 5.72). So my "average" gear ratio is 7.81, and the closest on the chassis is 7.94: theoretically, it the best compromise between power at low speed and top speed.

On the right is a capture from my TB-01 manual with the available gear ratio table and how to get them. The gear ratio is the combination of a motor pinion (lines) and a spur gear (columns). The "T" values (16T, 61T...) stand for the number of teeth on the gear.

The letter between brackets along each gear ratio shows how the motor need to be mounted to perfectly fit the spur gear.

That's it. I just now need to mount the 58T spur gear on the central shaft, the 19T pinion on the motor and fit the motor on its mount respecting the alignment. Finish rebuilding the chassis and we go for a test run.

At first, I decided to swap between the Ford Focus RS WRC 2001 body and the Lancia Delta HF Integrale's (58117 kit). Afterwards, this was a bad idea: the Lancia body is way too fragile to be used in rally. So swapping between bodies implied to constantly modify the chassis setup from off-road to on-road, especially the damper settings. This is the reason why, after a few months, I decided to dedicate this TB-01 chassis only for rally and to get a TA-01 chassis dedicated to on-road use for the Lancia Delta HF Integrale body (which would then be a 58117 kit.

So the Ford Focus RS WRC 2001 body arrived a few weeks after the chassis, but it was already painted, decorated and in excellent shape. So I just had nothing to work on it, except some paint on the cockpit set (which is pretty much a reduced version compared to the Lancia Delta HF Integrale's). 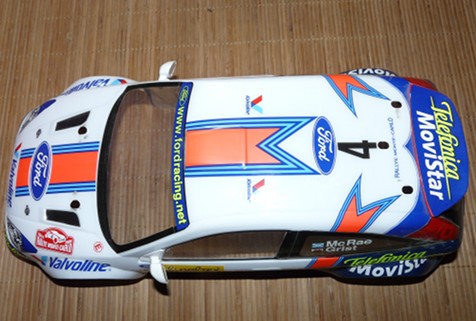 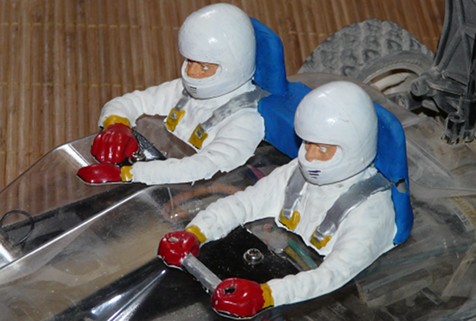