During the test drive with my TB-01 chassis with its new bodyshell, the Sport Tuned motor died. This motor was previously used and abused by my Sand Viper and my Madbull: I wouldn't be able to say how many battery packs it lasted, but you can count dozens. Anyway, the motor's performance suddenly dropped and it was smelling very bad. Dr House's conclusion: dead.

I was about to throw it to the bin when I got an idea: could it be opened to see what's inside? Let me warn you: the Sport Tuned is not meant to be opened so opening it will definitely kill it. Who cares, mine is already dead.

So, let's go delicate: pliers, diagonal pliers (dikes, snips or side cutters depending on your english variants), and... hammer

From left to right:

As you can see, everything is dirty and rusted. Let's have a look to the rotor: this part of the motor is made of the axle (you can see the flat side for the motor pinion on the left), a bronze bearing (looks gold: replaced by a ball bearing on high end motors) and the wiring around 3 poles. The wiring is connected to a part called the commutator on the right side of the photo:

If you had any doubt left, I think this photo made it vanish: this is definitely a dead motor. The commutator (the part on the right side on which the wiring are soldered) is normally entirely covered with copper, surface against which the brushes are in contact. Here, the copper has disappeared. No surprise though, but it is not the most interesting: the interesting point is that I cut one wire from the commutator and that it is now missing around its pole, as you can see on the lower part of the photo

However, I didn't pull it away like an idiot: I patiently counted how many times this wire was wrapped around the pole... and the answer is

: 27 times. As there is only one wire per pole, this means the Tamiya Sport Tuned is a 27x1 motor. Forget about the legend saying there is a 23T Sport Tuned for Europe and a 27T for Asia and USA: this one was bought in Europe and it is definitely a 27T motor, but with a timing which explains its rotation direction and its superior performance compared to the stock Mabuchi 540 silver can.

However, there's one fact: today's Sport Tuned motor has a shoter axle than it used to have. On the first units, the motor axle was significantly longer than on current units which motor axle length is equal to the stock Mabuchi 540 (or Johnson) silver can. So, it is possible that the first Sport Tuned motor were 23T with ø 0.8mm wiring whereas current motors are 27T with ø 0.65mm wiring.

The track is made of hard gravel with poor grip, which is great fine for controlling slides. The first impression is that the 7.94 gear ratio is still too short: my scientific method to guess it was not that reliable. The chassis general handling is excellent and it is easy to control it. For this first run, the suspension was too soft: I changed the springs for stiffer ones but keeping the soft setting for the piston rod.

For the second run on the same track, I had changed the gear ratio to 7.18 (21T motor pinion): it provides a clear top speed boost keeping and still a strong traction needed for rallying due to the poor grip of the track. I also mounted urethane bumpers at the front and the rear to preserve the body. Unfortunately, nothing exists for this chassis, the only solution is to adapt TG-10 urethane bumpers (reference 53353) and to replace the TB-01 bumpers with TG-10 (reference 50803).

These are the last changes I made to this model which was made for rally: it is very well protected against projections inherent to this kind of driving and proves to be reliable. Since 2008 and the 58417 kit release on the DF-03Ra chassis, Tamiya gave a new boost to the rally category by fitting short arms to the Dark Impact chassis. Unfortunately, the rally version shares its buggy counterpart problem: the gearbox is not waterproof and you can easily find comments of fans who made they motor pinion and spur gears bald due to dust and pebbles getting in. Moreover, only a few models include a chassis cover, even if you can easily make your own by fitting a Dark Impact body on the chassis tub and then fit you rally bodyshell.

Even if it tends to become rare and its design is not the most recent, in my opinion the TB-01 chassis still remains Tamiya's best ever rally chassis. 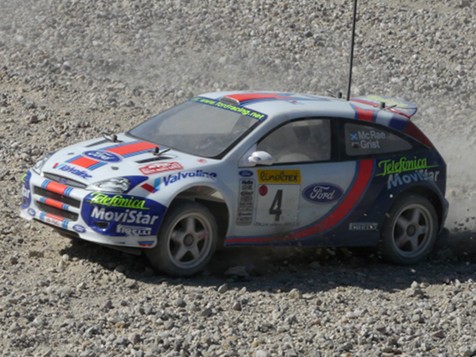 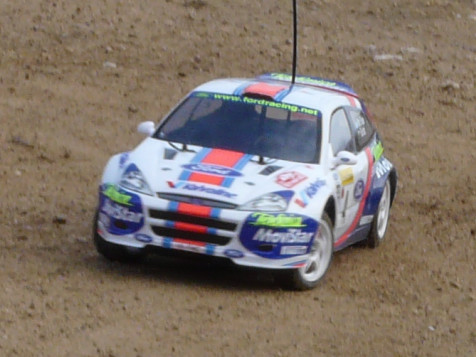 I finally brought back my brave TB-01 chassis to the new track, right after giving it an exhaustive checkup. About this, apart from a dead ball bearing in a front upright, the full checkup ended in a comprehensive cleaning and replacing the stock motor with a Sport Tuned unit. 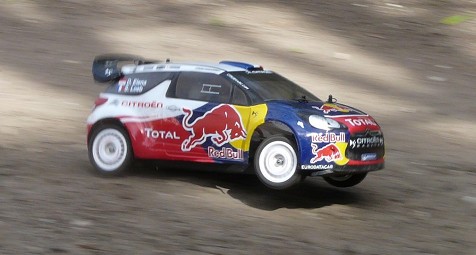 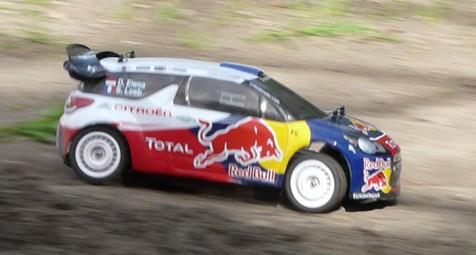 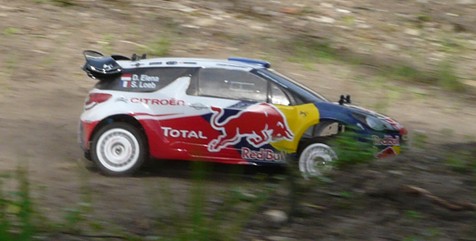 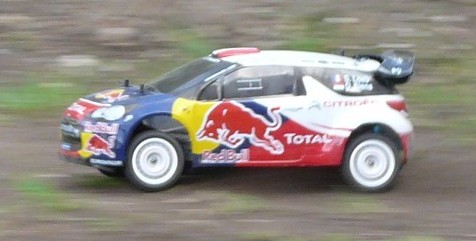 At the (transmitter) wheel, driving the TB-01 chassis is amazing as always and quite easy to control thanks to the four-wheel drive. Visually, the Citroën DS3 WRC bodyshell provides an even more scale realistic look.