This inboard suspension system was first seen on a Touring chassis in 2007 with the kit 58389 EBBRO 350R based on an evolution of the TA-05 chassis named TA-05 IFS. The same concept was then applied to other chassis (among which the TB-03), sometimes with modifications: 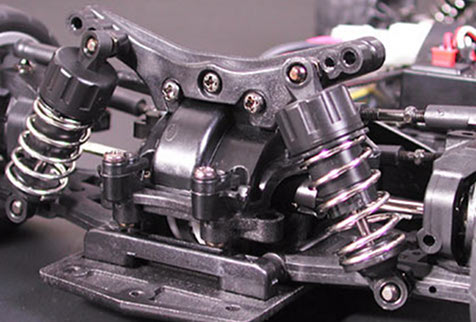 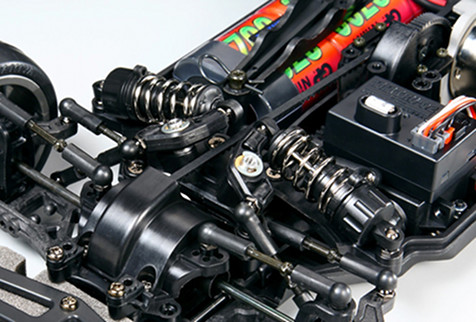 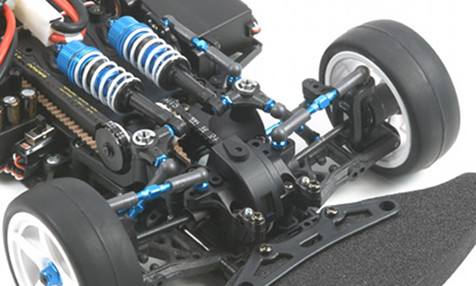 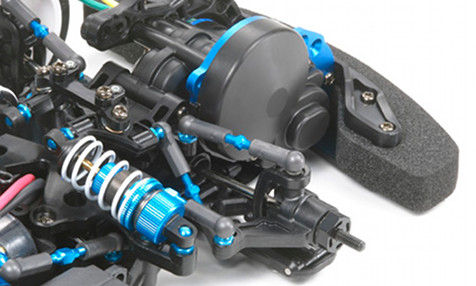 I'm sure you had noticed I wrote "first seen on a Touring chassis" right before the above photos? Here's why: 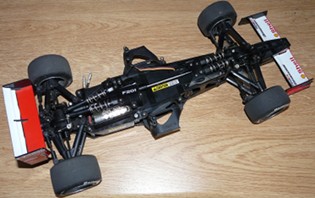 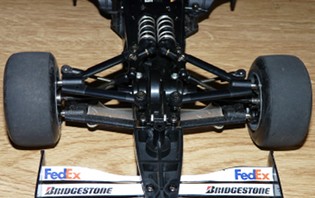 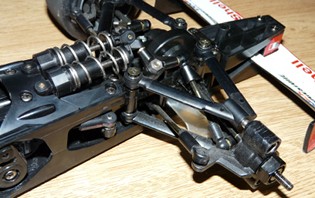 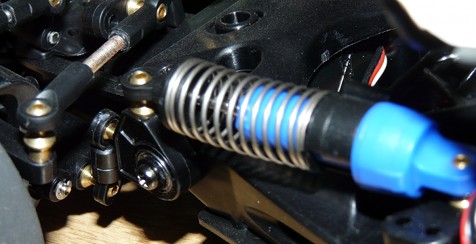 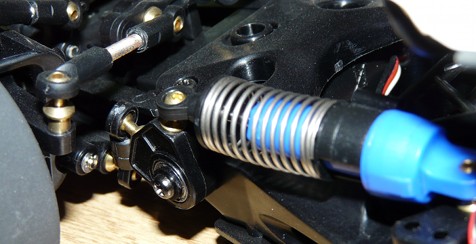 The F201 chassis released back in 2002 already featured four inboard dampers, a system Tamiya called ISS (Inboard Suspension System) at the time. This is the origin of the IFS system also found on the TamTech Gear GT-01 chassis on my Porsche 935 released in 2006.

Why bothering making more complex a system that is long known to be efficient?

This is a question of unsprung mass: the unsprung mass is "the mass of a vehicle elements that exactly follow the road irregularities" (translated from this French Wikipedia page).

On a chassis, it corresponds to any part between the wheel nut and the chassis frame. All manufacturers do their best to reduce the unsprung mass since "ride quality and road noise are deteriorated" (Wikipedia). For example, this is the reason why dampers are mounted with the oil tank upside since most of the weight is located into the oil tank (the oil tank + its oil content). The upper damper end being attached to the chassis (sprung mass), the oil tank suffers less road irregularities than its lower end attachment to the arm. Unlike a common belief, the "damper head up position" is not related to any leaking issue (if a damper leaks head down, il will leak the same when mounted reverse due to the pressure from the piston on the oil)

The benefit from the IFS system is to include the damper to the sprung mass of the chassis.

This IFS system is pretty interesting due to the links and cantilever effect involved.
Dampers are kept away from hits and debris.
Above all, Tamiya can fit very low nose bodyshells since there are no longer damper towers to be hidden under the front bonnet.

My guess is Tamiya was mostly interested by the last answer...

The suspension kinematics was part of my interest when I chose the TB-03 chassis: I must confess I was curious. One question remains:

Is the IFS System efficient at the track?

Well, difficult to answer this question before running it. A first clue: drifters prefer a classic suspension architecture, thus the two TB-03 Drift versions. The reason is that at equal ground clearance, the damper works on a longer distance in IFS configuration compared to the classical because the arm movement gets amplified by the links and the cantilever effect. Moreover, the suspension is somewhat stiffer with IFS whereas drifters look for the softest possible suspension to increase mass transfer effects (thanks to Shionn for the explanations).

In the Touring category, this is not a problem since the typical suspension setup is stiff at the front and softer at the rear. As a consequence, the front dampers work with a very limited travel: the IFS System shouldn't have any significant impact.

However, no pure racing Touring chassis use the IFS System (TRF products for Tamiya). Several explanations are possible, among which the ease of setup and maintenance, more friction due to the links and the cantilever (loss of efficiency), more weight than a classical architecture or perhaps a lower reliability.

Anyway, verdict at the track. However, as I often remind it, fingers do make the difference: you need good driving skills to detect differences between chassis setups or designs. I never pretended my driving skills are good enough to detect every slightest difference between setups.