It's rather difficult to rationally explain how this model joined my collection. Say I was randomly surfing on a famous auction site when I saw this chassis along with a... bodyshell? blob? ...well, an ugly "cover". But when I focused on the photos, I realized it was coming with many interesting options. As only 2 minutes were left, I only placed an offer "to see" with no real hope (and not much thinking either).

You already know my Suzuki Swift running an M-03M chassis: this model is one of my absolute favorites that I almost run every time I can. The M-01 chassis is the previous version from 1994: 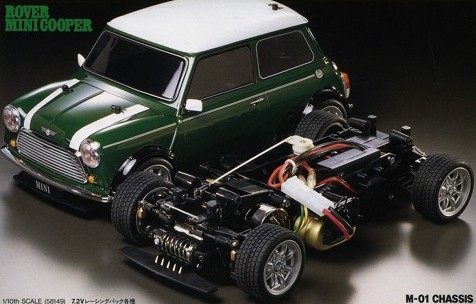 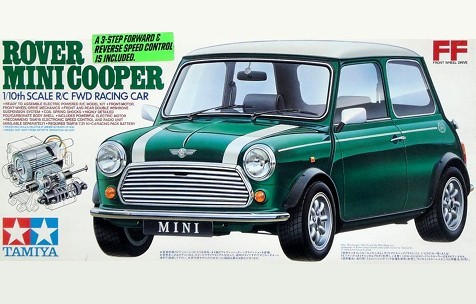 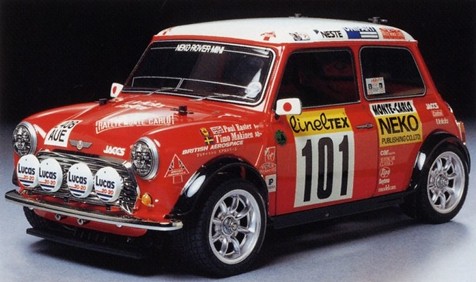 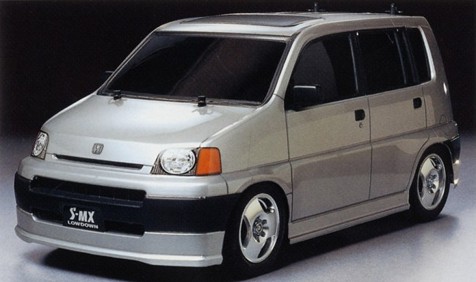 Apart from the last model that may have been successful in Japan, we can consider the M-01 chassis as the Rover Mini Cooper's. The chassis design in itself looks like it was made for this specific bodyshell with very small front and rear overhang. In fact, Tamiya offered nothing less than 9 models on the M-02 RWD variant I used for my Toyota Celica LB Turbo Gr.5 (the M-02 being a mirror of the M-01, simply reverting the front and rear drivetrains).

So the M-01 remained the Rover Mini Cooper's chassis (and the gray cube's too, that is

), but above all, it gave birth to the whole M-Chassis dynasty:

My model when it arrived

A few days after clicking, I received this: 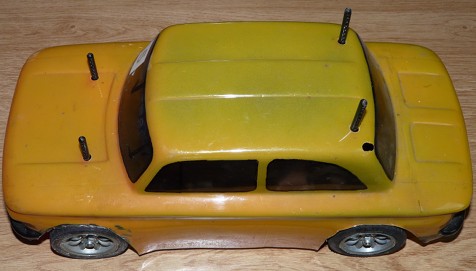 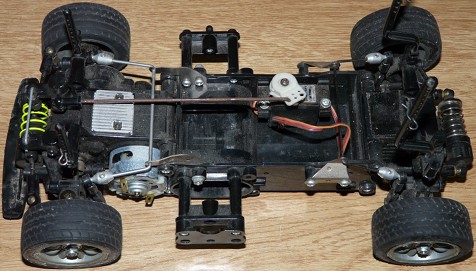 For your information, this is an NSU TT bodyshell, probably made by Colt or Carson (it could also be the same, by the way). The molding quality is pretty good, the lexan is pretty thick but quite stiff. Well, that's all about it because I am not going to keep it.

However, I'm very happy with the chassis: apart from the dust, you can see hydraulic dampers, 4 M-Grip tires that still can serve, a pretty small servo (for planes I think), front and rear anti-roll bars and the aluminum motor mount. What you can't see: ball bearings all around and an unknown motor rated at 22.000 rpm. Also, you can't see the front bumper (the one you see is the rear unit) and the battery stay door: this is normal, the seller specified it. Overall, this is a great deal since no parts is broken or cracked. The anti-roll bars (reference 53239) and the aluminum motor mount (reference 53241) are great extras since they are now pretty rare and expensive.

If I can say that no part is damaged, this is because I entirely disassembled the chassis to clean it: 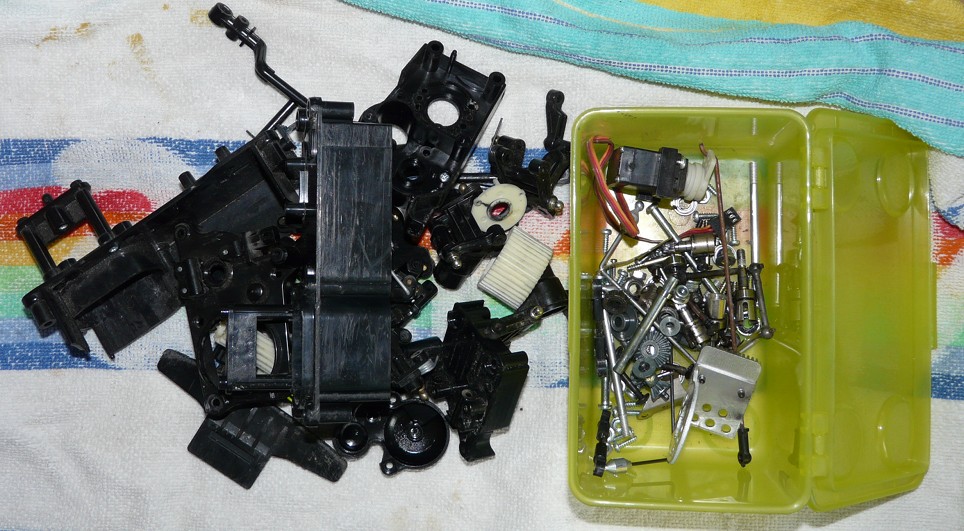 Obviously, the chassis is not new: it probably spent most of its career racing seriously on carpet if I believe the cement on the tire walls (technique used to make the tire walls harder, avoiding them to lose their shape when cornering). However, the chassis doesn't look like having suffered from serious hits and the overall condition makes me think it had been completely cleaned up before being stored for years.

Let's go for an express build starting with the front gearbox: 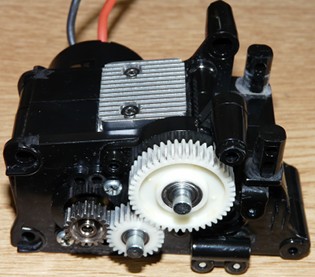 A note about the aluminum motor mount: as you can see on the photo, it also serves as heat sink and its shape gives an indication on how efficient it is. Unlike the M-03 chassis where only the two motor screws conduct motor heat to the heat sink. I didn't explain the rear gearbox assembly because the housings are empty.

Next step of the build with the assembly of the central frame and the placing of electronics:

On purpose, I stopped here to shoot the second photo. Electronics are there (steering servo, TEU-302BK ESC and 2.4GHz receiver), the Sport Tuned motor is also installed. Next step is to assemble the front and rear gearboxes to the central frame. But until this very moment, you can not tell whether it is an M-01 or M-02 chassis: in fact, placing the gearboxes will determine whether the chassis will be FWD or RWD.

However, the Sport Tuned motor proves it is an M-01. The Sport Tuned motor has a specific rotation direction which is perfect for an M-01 chassis, but not for an M-02 since it would rotate the wrong way (same issue on the M-04). This is why Tamiya released another motor called Acto-Tuned M Special (reference 53251) at the time. Performances were similar to the Sport Tuned, but this special M-Chassis motor was lighter, and above all, you could change the rotation direction.

Last steps are to mount the gearboxes on the central frame, install the anti-roll bars and the steering linkage, and to cable-tie everything:

Here we are, my M-01 chassis is ready to hit the track. The 55D wheels come from ABC Hobby (55 is the tire diameter, my Suzuki Swift wearing 60D) and the hydraulic dampers come from 3Racing. About dampers, like with my M-03, the suspension is hard at the front and soft at the rear. If you have a look at the anti-roll bar, you'll see the same setup (the front bar being thicker thus more rigid).

At the foreground, my "custom" battery tray door: I trimmed a leftover part from my M-03 (or from a TL-01) since the original part was missing.