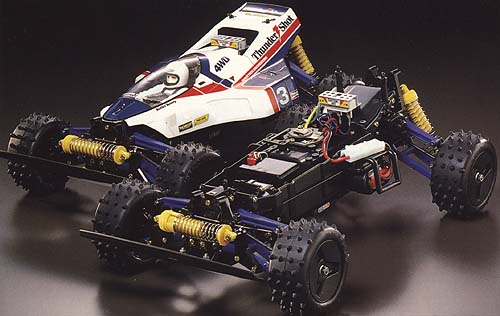 The Thunder Shot was kit number 67 from Tamiya. A 1/10 4WD off-road car, it was designed as a replacement for the aging HotShot chassis type cars.

By the time the Thunder Shot was introduced, it had become clear to everyone that the HotShot chassis had seen better days. It was heavy, cumbersome to maintain and not tremendously tuneable. The Thundershot was the first car from Tamiya to rollout with their 4WD platform that would become the basis for its new off-road cars.

The front and rear gearboxes featured a smaller and lighter design for its internal gears. Utilizing the tried and true shaft driven system, the gearbox assembly process had been greatly simplified. Gone (finally) were the steel sliver plates used for adjust pinion gears.

The thinner gear box design also allowed for longer lower suspension arms with single upper control arms. This – in turn – allowed for more suspension travel. As well, the upper control arm would later be replaced with adjustable rods which allowed for camber changes. Tamiya also took the time to update the steering mechanism, gone was the insanely wild bump steer common to the Hotshot series of cars. It was like day and night!

The off-road handling was superb compared to previously released Tamiya’s. The system was soft and compliant to off-road use. When the Thundershot was introduced, Tamiya actually went to the effort of sponsoring a few drivers using the Thundershot. On technically challenging tracks with very bumpy surfaces, the Thundershot held up quite well.

It was an impressive showing for what would really become their entry-level 4WD car. Popular upgrades to the car included ball bearings and switching out the monoshock in the front for a dual shock setup.

Although most people don’t realize it, the Thundershot is very significant in Tamiya’s history. It was the first car with the chassis that would succeed the aged HotShot chassis. This chassis had to handle better, perform reliably and be cost effective so that Tamiya could still sell the car as an entry level car.

Tamiya succeeded by all accounts. Unfortunately, by the time the Thundershot came out, consumers were starting to turn their attention to on-road racing. Pan cars and later on-road cars would become the popular choice. The Thundershot chassis never became as popular as the Supershot, Boomerang or others.

This chassis and all of the parts for this chassis have long been discontinued. Parts are tough to find now. Especially difficult to find are correct wheels and tires.

Front suspension arms and body mountings posts are especially fragile on these units and all used cars should be checked for these failures.

ESC were very popular already and the mechanical three-step were tossed in the garbage quite often. For completeness, you should try to find a mechanical controller.