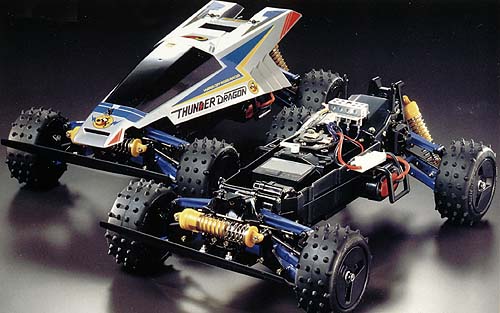 The Thunder Dragon was kit number 73 from Tamiya. A 1/10 4WD off-road car, it was built on the Thundershot chassis.

The Thunder Dragon was nothing more than a rebodied Thundershot. Underneath the body was the Thunder shot chassis. About the only two differences that I can recall are the front body mounting post and the molding for the rear gearbox cover.

The Thundershot chassis was designed as a replacement to the aging HotShot. Since the Thunder Dragon is based on that car, it carries all of the positives of that redesign. The front and rear gearboxes featured a smaller and lighter design for its internal gears. Utilizing the tried and true shaft driven system, the gearbox assembly process had been greatly simplified. Gone were the steel sliver plates used for adjust pinion gears.

The off-road handling was superb compared to previously released Tamiya’s. The system was soft and compliant to off-road use. On technically challenging tracks with very bumpy surfaces, the Thundershot held up quite well. It was an impressive showing for what would really become their entry-level 4WD car. Popular upgrades to the car included ball bearings and switching out the monoshock in the front for a dual shock setup.

The Thunder Dragon body was inspired by the "Transformer" or Japanese anime craze of the late 80’s. A rather geometic looking car, it never really caught on with buyers. The car looked "techno" and not aggressive. The Thundershot sold much better than the Thunder Dragon.

The Thunder Dragon was not a popular car when it was new. In terms of historical significance, it has none other than to complete a run of cars. The car carries no significance advances in the chassis as it’s identical to the Thundershot.

If given a choice between buying a Thundershot or Thunder Dragon, I’d take the Thundershot everytime. It was the first of the series and has a better looking body to boot. New in box examples of the Thunder Dragon can be purchased for about $180 which is approximately what they cost brand new a decade ago. Used examples vary in price but expect a mid range of about $60 for a decent used one.

This chassis and all of the parts for this chassis have long been discontinued. Parts are tough to find now. Especially difficult to find are correct wheels and tires.

Front suspension arms and body mountings posts are especially fragile on these units and all used cars should be checked for these failures.

ESC were very popular already and the mechanical three-step were tossed in the garbage along with the lexan dust shield for the inner tub chassis. For completeness, you should try to find a mechanical controller.