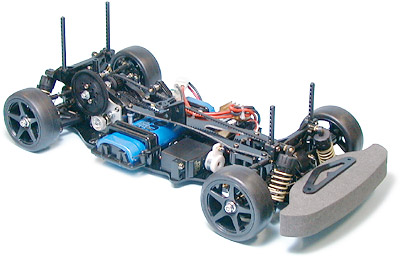 The TA04 Pro is kit number 261 from Tamiya. A 1/10 scale 4WD on-road car, it was designed as a true competition car for the experienced hobbyist.

Unfortunately, it was always Tamiya's competitors that ended up refining the market and taking it that much further. Take the current touring car craze. Tamiya started this market years ago with the TA01 chassis, but it wasn't long before competitors took the sport to new heights and left the TA01 in the dust as a competitive vehicle. It became important for Tamiya to get back into the competition market. Racers tend to spend signficantly more money for parts and upgrade parts than casual hobbyists.

The TA04 is Tamiya's latest effort to re-enter the ranks of competition R/C cars. To say that the TA04 was revolutionary would be somewhat misleading. More accurate to say that it was revolutionary for Tamiya, but not for the rest of the industry. Where they failed with the TA03 with trying to be uniquely "Tamiya", the TA04 would adopt tried and true industry standards.

When the TA04 debuted it was immediately evident to people that the chassis looked very similar to cars from HPI, Kawada and Alex Racing. In a twist of irony, Tamiya would take the best from their competitor's racing machines and refine the ideas into a uniquely Tamiya chassis.

The TA04 consists of a double decker FRP chassis with a twin belt drive system. The FRP chassis is wider than that used in the TA03, adding extra torisional strength and reduced flexing. A long aramid reinforced belt fed the front wheels while a shorter one connected the rears. At both ends of the car, ball differentials were used to control power. 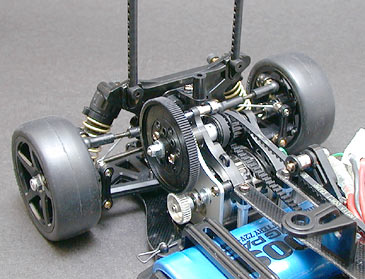 Suspension arms were longer and offered less camber change when fully compressed. Controlling the movements of the suspension were oil filled plastic shocks with front and rear sway bars. The shocks mounted to shock towers that featured a multitude of mounting points for the shocks. Full ball bearings were included as well as aramid belted tires and shaped inserts. This was perhaps the most adjustable chassis to come from Tamiya yet.

Is the car competitive? Yes, you bet it is. The drive train has far less rolling friction and is whisper quiet at speed. Handling could be easily tuned and the layout of the car was instantly familiar to racers that were migrating from competitor cars.

But there is a downside, handling of the '04 in the hands of the novice would prove frustrating. The car suffered from a very nervous personality. Set up the car according to the manual and it would exhibited severe oversteer. Manageable on carpet, this oversteer would prove difficult to handle on pavement or unprepared surfaces. This was especially evident to those that were upgrading from a TA03. Most racers ended up changing the shock and camber settings to compensate.

The TA04 Pro represents the first of the series. It is difficult to determine whether this car would be collectible moving into the future. The lack of a body and motor detracts from the kit's personality. History has shown that pure competition cars do not appreciate in value significantly.

It's interesting to note that Tamiya released a "preview" version of the TA04 called the TRF-414. This model was never listed as part of their regular run of cars. Available in very limited numbers which included an engraved owner's plaque, the cars were assembled from mostly machined parts. It was the foundation from which the '04 arose from. The limited release of the 414 makes that car signficantly more collectible than the '04 ever will.  Currently the TRF 414 is going for about $400 which means that the price is holding steady.

Early reports indicate problems with the roundness of the spur gears. This is most likely due to the mounting hub which is made of plastic. Some people have reported premature failure of the spur gear because of this. Fortunately, they're not very expensive.

Another common problem is spur to pinion gear separation after extended runs. This has been traced back to the aluminum motor plate heating and expanding. The pinion "pulls away" from the spur gear and causes a chattering noise during braking. Tamiya has sinced addressed this with an upgraded motor mount which incorporates ribbed heat dissipating fins

Expect that used examples of these cars would be raced. Some have had a hard life because of this. Despite Tamiya's claim of "sealed" ball bearings, they will get grit inside if not maintained properly. Ensure that the car is in good order, parts can add up if you end up having to replace parts from multiple parts trees.