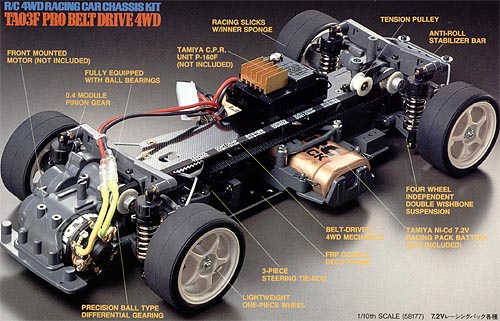 ** Motor, speed control and body are not included in pro kits

Tamiya has a habit of coming out with three models for every popular chassis. The first, is the basic model, a plastic tub chassis with the minimum number of "go-fast" parts. The second, is a Pro edition which usually includes a FRP (Fiber Reinforced Plastic) chassis and other optional parts that improve performance and reliability. Lastly, a TRF (Tamiya Racing Factory) version which is every optional part Tamiya makes for the car in one kit. The TRF model, is normally the last one to be released.

The TA03F reviewed here is the Pro model. It is based on the original TA03F chassis which was a unique front engine design. The most noticeable difference between the Pro and the normal '03 is the double-deck FRP chassis. The FRP replaces the plastic tub chassis and provides for a stiffer, lighter car. In typical Tamiya fashion, the FRP fits precisely and features countersunk screw holes for a professional finish. FRP is a more difficult building medium than plastic injection molding. Tamiya pulls it off brilliantly as the parts assemble without a hitch.

Other enhancements include front and rear sway bars, ball differentials, lightweight 5 spoke wheels and a full ball bearing set. Enough racing gear to get the weekend warrior up to spec for racing. Once assembled, the car is lighter than a regular TA03, but the greatest advantage is the handling increases that the Pro model has over the regular one. The FRP chassis is stiffer front to rear and torsionally. This allows subtle suspension tweaks to be more effective.

Of note though is that this kit does not come with a body, motor or mechanical speed control. Tamiya targeted the car for racers and figured that most people would toss the 540 can and speed control anyhow. Plus, most racers prefer to choose their own bodies.

So, how does it drive? Amazingly well. As mentioned previously the TA03F is a front engine design. That is, the electric motor sits ahead of the front gearbox. At first glance this would seem somewhat silly, but driving is believing. The "F" design endows the '03 chassis with extremely benign and forgiving handling characteristics. Oversteer is virtually eliminated and spinouts going into corners was minimized. For the racer first starting out, it was a great car to learn in. The understeering characteristics of the car meant that the car was more predictable at high speeds and was easier to manage in a race situation.

Lastly, the '03 design was pretty much maintenance free. Both gearboxes were sealed from the elements, the drive belt is suspended high above the chassis where flying debris cannot reach it. Plus the upper control arms are fixed length from the factory making minor adjusts unnecessary.

This doesn't mean that the car is not competitive with other racers. The TA03F chassis went on to win an International racing championship in 1996 under the guidance of Tamiya driver David Jun. Although the chassis has been outclassed by the new models coming out, it is still a competitive runner at local races. Plus the larger that normal aftermarket of hop-up parts should keep the car reasonably competitive for some time to come.

It is too early to predict collectibility for this kit. Based on past history with the TA02 racing kits, it should be a good market. Currently though, the kit is still very "fresh" with a number of new and used one coming onto the market on a regular basis. You can expect prices to over in the $100 to $150 mark for at least a few months.

Used TA03F Pro cars should be approached with some caution. Not because of any reliability issues, but rather that the cars get used very hard. Especially important is to check for wear on the belt and belt pulleys. The plastic pulleys on either end of the belt are subject to a lot of friction and tend to wear dramatically. This is further aggravated by the mis-use of the belt tensioner. Most people are not aware that the belt tensioner does not need to be used unless the belt is starting to slip. Even then, there is not need to pinch down on the belt such that it's snug with no slack.

Check also the spur gear in the front gear box. It tends to wear quickly if the pinion gear is misalign or a powerful racing motor is used. Misalignment is common on the '03 if the car has been subjected to extended runs with low-turn modified motors. The plastic tends to warp with the heat and distort; this causes misalignment of the pinion.

Parts are still available but are becoming a bit tougher to find as Tamiya starts to rapidly discontinue parts for the chassis. If you're not after authenticity, you could go aftermarket for spare parts. Companies such as Trinity, Cross and Eagle Racing all provide numerous hop-up parts for the TA03.