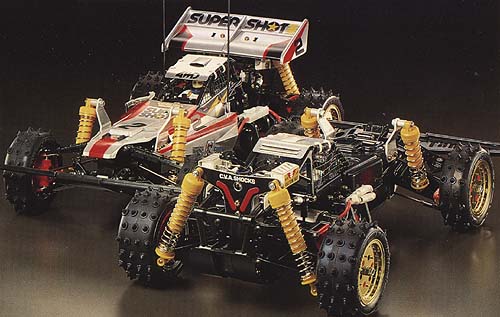 The Supershot was kit number 54 from Tamiya. A 1/10 scale off-road vehicle, it was ultimate "hopped up" Hotshot.

What a beast! The Supershot was quite a sight to behold when it was first released. The car looked much more aggressive than the HotShot for which it was based on. The kit came fully loaded, the options that one could purchase for the Supershot could be counted on one hand.

The Supershot was basically a "repackaging". Tamiya took a base model HotShot and loaded it up with all of the factory upgrade accessories available at the time. Monoshocks were swapped in favor of a fully independent suspension, full ball bearings were loaded in, pin spike tires for better grab and a Technipower motor to power it all. For longevity, a full length underbelly tray was added to protect the chassis.

Building a Supershot was not easy. The design was complex and the construction process old-fashion which meant a lot of work screwing together all of the pieces. It seemed that the car was built in layers. Just when you think you’ve completed a section, the instructions call for another piece of plastic or FRP to be attached on top of it.

For all of the add-ons though, Tamiya never saw to improving the fundamental design of the Hotshot. The front suspension had very little travel, the radio gear was impossible to get to and the drive train itself had a lot of internal friction. It was one of the noisier cars when it was running, the car would wail like a banshee at full speed.

Tamiya built the car for competition purposes; to give racers a better deal than buying a HotShot and going the upgrade route. I’m not sure what world Tamiya was living on, but here in North American I didn’t remember a single Supershot racing anywhere! The car spent most of its time in backyards and neighborhood streets as they were purchased by non-racers.

Still at the end of the day, the car looked fantastic! There’s something about the design of the Supershot that made it look aggressive, strong and expensive. Further, the fact that the car came fully loaded from the factory was of great interest.

After that review you would think that the car has no collector appeal, but it couldn’t be further from the truth. The Supershot marks the peak point of the old HotShot chassis. It was a very elaborate kit and collectors tend to like the complexity of it. Plus, because of its price, it was a pretty rare kit as well. New in box kits can fetch upwards of $450 on the market now and that price is expected to only climb.

Parts availability are not so bad on this car. Many of the parts are interchangeable with at least a half a dozen other vehicles so don’t despair if a part on your car fails.

The technipower motor is key. Used examples never seem to have the motor available and so having one is very desirable. The pin spike tires wear very fast and new ones are difficult to come by because few Tamiyas had them as original equipment. The tires were sold as optional equipment for the most part.

Front steering knuckles are a classic weak component in the front suspension as is the front gearbox which absorbs the brunt of a front end collision. The suspension pieces are prone to hairline cracks around the steel shafts, inspect carefully for the condition of the car before buying.