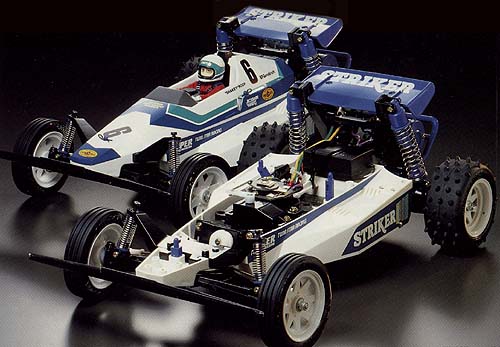 The Striker was kit number 61 from Tamiya. A 1/10 scale 2WD off-road car, it was designed as an entry level car for the beginner hobbist.

Tamiya knows that it has a large chunk of the entry level market captured. And why not, Tamiya cars are well engineered, easy to assemble and have wonderful styling. The Striker was designed as an entry level car which could be upgraded later as the modeller matured.

As it is with a lot of Tamiya cars, the Striker has dipped deeply into the Tamiya parts bin of major components. The entire rear drivetrain as well as the wheels and tires are lifted from the Falcon (minus the oil filled shocks), and the front end is directly off the Hornet/Grasshopper chassis.

The tub chassis was completely new. The philosophy behind the design was to mimic the look of a Formula 1 open-wheel racer in an off-road vehicle for a nice sporty look. How successful Tamiya was is a debatable matter but the molded plastic body did eliminate the need to paint the body. A beginner could directly apply decals and have a nice finished vehicle in short time.

The use of components from other vehicles cuts down on R&D costs as well as development time, but it also introduces some problems. The front suspension was horrible on this vehicle and introduced a tremendous amount of bump steer. It certainly didn't help matters that the car had no damping at all in the front.

Another weak point was the abs chassis itself. The chassis was prone to cracking at its thinnest point where the front shock towers mount up. Although CRP put out a reinforcement plate for the car, Tamiya never really addressed the issue and no changes were made to the tub when they used it later in the Sonic Fighter.

But everything said, the car was priced right and Tamiya sold a good quantity of them when they first came out. And to amortize the costs of rolling out the Striker, Tamiya later introduced a "deluxe" version called the Sonic Fighter. With slight changes to the body and oil filled shocks all around, they managed to milk a little bit more lifespan out of the components.

The Striker is not old enough or innovative to really interest the collector. New in box kits go for a reasonable amount of money, but if you compare, it's about the same as what they went for new.

But as a beginner vehicle, many young enthusiasts will remember this car as their first R/C vehicle. And over the span of time, this will add to the car's appeal as those folks grow up and wish to reclaim a bit of their childhood. A car to buy now with the hope of future returns.

Almost all the parts are easy to come by. They sold well when new and a glut of new old stock parts are floating out there. The only difficult thing to find are the rubber tires. Because they shared rubber with the Falcon, many of these parts have been taken by Falcon owners trying to restore their vehicles.

Most used examples that I've come across are in fair to poor condition. It's very rare to find a mint condition Striker. As a beginner's car they tended to be driven a lot (and into things!). Check for damage on the chassis. Scratches are okay as the chassis can be repainted in white if necessary.

In the case of a Striker, I'd try to either hold out for a new in box or build a new one from spare parts. Both are still very possible and will ensure you of a more desirable item in the future.