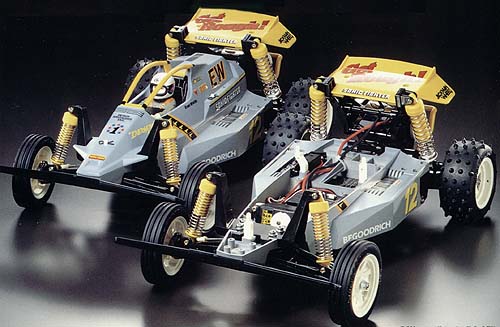 The Sonic Fighter was kit number 71 from Tamiya. A 1/10 scale 2WD off-road car, it was designed as an entry level car for the beginner hobbist.

The philosophy behind the original Striker design was to mimic the look of a Formula 1 open-wheel racer in an off-road vehicle for a nice sporty look. The Sonic Fighter takes a slightly different approach by giving the car a "jet fighter" type look. By increasing the height of the top chassis, changing the color theme to grey and giving the open cockpit a roll cage, Tamiya created a silouette that mimics a jet fighter.

Improvements to the original Striker chassis was restricted to oil-filled dampers front and rear with slightly stronger shock towers for the front. The original chassis was created from existing Tamiya components; Grasshopper front end mated to a Falcon rear end. The use of components from other vehicles cuts down on R&D costs as well as development time, but it also introduces some problems. The front suspension was horrible on this vehicle and introduced a tremendous amount of bump steer.

Another weak point was the unique abs chassis itself. The chassis was prone to cracking at its thinnest point where the front shock towers mount up. Although CRP put out a reinforcement plate for the car, Tamiya never really addressed the issue and no changes were made to the tub when they used it in the Sonic Fighter.

Assembly was very quick as the parts count was quite low. This car was intended for the beginner. Once on the road the car drove not too badly. The oil filled dampers really helped control the pogo-ing that really bothered the Striker suspension system.

The Sonic Fighter currently enjoys very little collector enthusiasm. The car is relatively new and was not tremdously popular when it was in production. New in box models go for about $150 which is only marginally more than what they were brand new.

Used models come up for sale rarely because of their lack of value.

Almost all the parts are easy to come by. The Striker - which is basically interchangeable with the Sonic Fighter - sold well when new and a glut of new old stock parts are floating out there. Difficult to find are the rubber tires. Because they shared rubber with the Falcon, many of these parts have been taken by Falcon owners trying to restore their vehicles.  Also, parts specific to the Sonic Fighter such as upper body and decal set.

Most used examples that I've come across are in fair to poor condition. It's very rare to find a mint condition Sonic Fighter. As a beginner's car they tended to be driven a lot (and into things!). Check for damage on the chassis. Scratches are okay as the chassis can be repainted in grey if necessary.

In the case of a Sonic Fighter, I'd try to either hold out for a new in box or build a new one from spare parts. Both are still very possible and will ensure you of a more desirable item in the future.