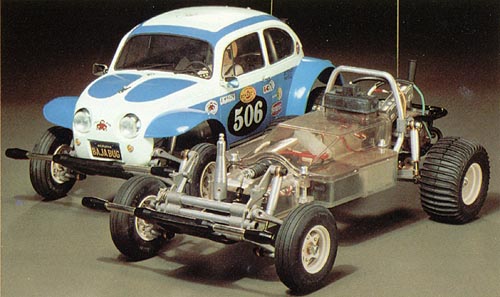 The Sand Scorcher was kit number 16 from Tamiya. A 1/10 scale off-road buggy that replicates the full size version. About as close as you can get to the "Holy Grail" of Tamiya R/C kits.

The Sand Scorcher was a product of the early "metal era" of Tamiya radio controlled cars. Derived from the successful Rough Rider chassis, all of the major components of the car were fashioned from metal making it very scale looking (and heavy!) and robust. Another significant point is that the suspension system was a scale copy of full sized buggies of the era. Trailing system in front with a lower control arm setup in the rear. Camber changes were quite wild (as it was on the full size models) in the rear.

Great care was also given to making the car durable. Tamiya used brass bushings in key areas and strong universals for the drive shafts. Radio gear and all the electrics were isolated into a water-resistant clear plastic radio box. The Sand Scorcher could be taken through puddles of water without any significant harm. Taken care of, these cars could last forever.

Topping all of this greatness was a highly detailed hard plastic Volkswagen Baja Bug body. Although no one knew it at the time, the VW body would become the longest running R/C body that Tamiya would use. Indeed, the body survives to this day with the creation of the Blitzer Beetle.

You would think that the scale realism would make the car difficult to put together. It this was not the case. In the '70s Tamiya had mastered the art of making miniature pieces with a precision that was unmatched by other modeling companies. Pieces fit together with great precision and tolerances.

Driving a Sand Scorcher would be a very odd experience for someone use to a newer R/C car. Because it was made of mostly metal parts, the Sand Scorcher benefited from a "break-in" period after which parts simply ran better. When you first run a Sand Scorcher, the first thing you notice is the shrill noise from the vehicle as it takes off. It's a loud electric car because of all the drive train noises. The second thing you'll notice is that acceleration is no where near what a modern Tamiya car will do. This car is quite heavy in comparison and it shows when you dip into the throttle. All in all though a very satisfying experience.

The Sand Scorcher was arguably the best looking of the metal era Tamiyas. It was also one of the most collectible R/C cars. It used the same basic chassis as the Rough Rider but topped it with the evergreen VW Bug body. The car generates cross-collector interest from both Tamiya and Volkswagen enthusiasts.

Mint in box examples do come up for sale occasionally and fetch anywhere from $1200 to $2200. The price variations is representative of what happens when two people decided that they must win the auction. Mint condition built examples can also command very high prices upwards of $1800 for a correctly painted unused Sand Scorcher.

Used examples can bring a variety of prices but can be had for $200 or less depending on condition. Collectors are willing to shell out the big dollars for perfect condition examples due to the extreme difficulty in getting parts.

More than one seller has been caught trying to substitute a Monster Beetle or Blitzer Beetle body for the original (and impossible to find) Sand Scorcher body. Take care to establish the authenticity of the body. Flip it over and check for the name molded into the roof of the body ("1/10 RC VW BUGGY").

If you're purchasing a display model, ensure that all the little bits for connecting the radio gear are still there. The radio box, servo saver and other little items are all impossible to find now, so make sure you have them.

As hinted at before, parts are basically impossible to find. Most of the new parts appearing on the market now are parts that normally would never wear out on these vehicles anyhow. Other desirable parts are typically used. Bodies, tires, wheels and plastic parts are now all extremely difficult to acquire.