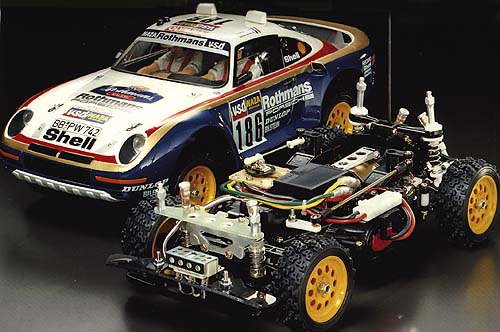 The Porsche 959 was kit number 59 from Tamiya. A 1/12 scale 4WD rally car, it was perhaps one of the most detailed and sophisticated cars ever to be produced by Tamiya.

This car is a must have and a must see! The engineering that went into the design of this car was amazing. The fact that Tamiya launched it fully loaded with a ball bearing kit, Technigold motor and an incredible lexan body only makes it that much more desirable.

The car is one of firsts for Tamiya. The chassis that the Porsche 959 was based on was engineered from a clean slate, it shares no components with any previous Tamiya design. Front and rear double wishbone suspension system with miniature oil filled aluminum dampers and coil springs. It all had to be extremely compact because Tamiya chose to make this car a 1/12 scale instead of the usual 1/10. This meant that the 959 wheelbase was far shorter than normal (211mm) and is very close to a modern day M-chassis Tamiya (225mm).

Inspect a built one close enough and you'll realize how difficult it was to engineer this car. Hobbled by the need to be 1/12 scale, the engineers were severely limited in space. Also, electronic speed controls were not the norm back then and so room had to be made for two servos and a mechanical speed control. To accomplish this, the motor was placed longitudinally and in the middle of the chassis. The two servos flanked the motor. The left side one controlling the steering with a very long arm.

The concept of an "off-road" rally car was also a first for a long time. For the past few years, Tamiya had concentrated on true off-road buggies with big beefy suspension systems and buggy style bodies. The Porsche 959 changed all that, here was a cross over vehicle that was equally happy in parking lot races as it was in the dirt. Although Tamiya didn't know it at the time, the Porsche 959 was a bit before its time as the popularity of touring cars today proves.

The car also featured the first "blow molded" lexan body ever. Tamiya realized that traditional methods of creating a lexan body would not allow them to create the 959 body with the realism required. The 959 body required "tuck in" to form the undersides. This was impossible using conventional methods because the lexan was "draped" over a form and then pulled off from above. So for the first time, the mold would be a negative image of the body, an upside-down Jell-O mold if you will. The lexan would then be blown into the inside of the mold using hot air. Once cooled, the mold - which was made with a left and right half - would be pulled apart revealing a detailed lexan body. By using this technique, Tamiya was able to do two things. First, exert far more pressure more evenly along the entire sheet of lexan thus forcing it to conform to every slight contour of the mold. Secondly, it was able to form the top and underside of a lexan body in one piece.

The result was an incredibly detailed lexan body which no other company could touch. Sharp edges, subtle detailing and the most minute detail captured in lexan! Tamiya even went so far as to include a detailed interior complete with two drivers and a light kit for the front headlights. It was an absolutely amazing body, there's no other way to describe it.

Blow molded bodies never caught on. Later, companies (including Tamiya) would use a three piece mold in order to achieve the realistic results required.

This car was also one of the tougher ones to assemble. If Tamiya had rating systems, this would definitely be an expert level car for assembly. The number of pieces and the tightness of some of the fitments made it difficult to put together. Fortunately (or unfortunately) the heart stopping price tag of $300 plus meant that only the true hobbyist or diehard fan of Tamiya bought these vehicles. You have to remember that this car was the wrong type and size to be raced. It was too slow to compete with on-road pan cars and too small to complete with off-road vehicles. Basically the only cars you could race were other 959s!

Tamiya later reused the chassis in a sister car the Celica Gr. B Special. The Celica didn't sell nearly as well but proved to be a popular car nonetheless.

This car has tremendous historical significance because it was truly a Tamiya original. Add to this the cross over appeal of being a Porsche 959 and you have quite a collectors market to deal with. It is not unusual to see these cars go for over $500.00 new in box.

The cars are rare and few ever come up on the used market in mint condition. If you have one, take care of it because its value will only go up.

Parts for the Porsche 959 are only interchangeable with the Celica Gr. B. This makes parts very difficult to come by. Especially impossible to get are new Porsche 959 lexan bodies. Initially, Tamiya had a lot of difficulties getting the blow mold technique working properly. This meant that some kits were shipped with lexan bodies that had holes in places where the lexan got too thin during production. Replacement bodies were sent out for free from Tamiya, but they were still very thin fragile creatures. Typically the bodies could not survive a crash; especially one in the rear. Add to this, that the kit required a rather difficult two-tone paint job along sections with compound curves and you'll be hard pressed to find a well painted body.

When buying a used 959 check for completeness because you could be waiting for a very long time just to get that one "teeny part that's missing". For example, the interior cockpit trim was routinely tossed, never to be found again.

Be sure that you are purchasing a 959 and not a Celica. There are differences in the mounting parts and it may mean that the Porsche body will not mount properly. There is a big difference in prices fetched for the Celica and the 959 and it wouldn't surprised me if someone misrepresented their car in order to get a better price.

As with all Tamiya cars that came with the Technigold motor, check to make sure that it has one. A lot of people sold them off separately because they were so valuable. Finally check to see if "Rothmans" is located on the decals. The earlier kits had decal sheets with the "Rothmans" name on it, but because of cigarette advertising rules, Tamiya later changed it to "Racing". The early decals are worth more.