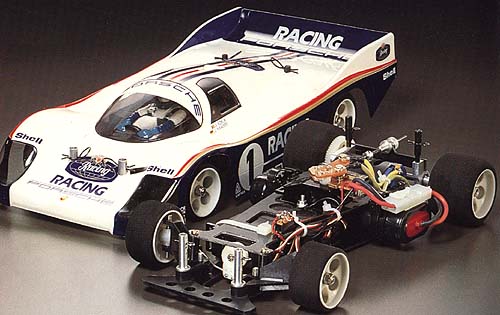 The Porsche 956 is a scale R/C version of one of the most successful racers ever launched by Porsche. The 956 developed great power, had great handling and was considered by many to be absolute bulletproof in terms of drivetrain reliability.

The Tamiya 1/12 scale version was a further advancement of their knowledge with on-road racers. Eliminating many of the heavier metal and aluminum the Porsche evolved into a FRP and plastic racer which was lightweight and responsive.

Pan-cars - a term which refers to their simplistic chassis design - were very popular; inexpensive and ultra fast they offered a lot for the money. The fact that they were restricted to parking lot racing was no big deal here in North America where big shopping mall parking lots were plentiful.

The Porsche 956 was one of a few Tamiya cars that would be based on this identical chassis. The Toyota's Toms and Newman Porsche were others. A sturdy double-deck design, it proved to be a very simplistic and reliable car. Where other companies struggled with FRP materials, Tamiya showed them that with good engineering FRP could have the ease of assembly as injection molded plastic.

The only problem with these cars was that many were sold to young kids. Although fairly easy to assemble, the 1/12 pan-cars were very tough cars to learn how to drive with. Their foam tires didn't grip well on dirty pavement (which was basically ALL pavement) and their short wheelbase made them very "twitchy" and prone to sudden directional changes. All of this was aggravated by a coil type speed controller that overheats easily.

The 956 came with two unique features. It was equipped with a RS-540SD Black Motor. This engine actually developed less torque than a regular Mabuchi but lasted longer on a single battery charge. Given the light weight of the 956, it was a good match. Secondly the car also featured aluminum posts for the body mounts.

Another unique thing is that these cars were designed to run with both 6-cell packs and 5-cell packs. The 5-cell packs made the car much easier to handle. It reduced the torque levels and made accelerating out of a corner more controllable. Unfortunately 5-cell packs were not widely available and most kits went out the door with the 7.2V 6-cell packs.

The pan-cars don't hold up well with collectors. Mostly because the chassis' underneath offered nothing out of the ordinary. New in box examples still go for pretty good money, but only a little more than what the cars were new. Used examples do not hold their value well at all. You can pick up a used one for under $40.

The Porsche 956 does have cross-collector appeal though, a large number of Porsche fans tend to drive the price of this particular model up to the point where a new in box can reach $200 if the right people are interested.

Used examples just aren't worth purchasing unless you're looking for a parking lot basher. The lexan bodies are fragile and the chassis offers no protection. They tended to look all cracked up within very short time.

For collectors, I'd recommend only shelf display units and new in box examples. Other cars are only good for salvaging parts from.

Original wheels are tough to come by and new lexan bodies are even tougher. Restoring a used unit can become very costly. Plus it's tough to assemble all of the required parts.