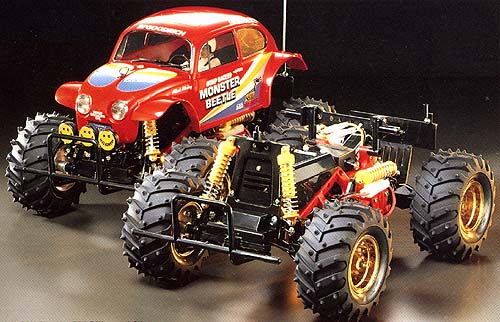 The Monster Beetle was kit number 60 from Tamiya. A 1/10 2WD, off-road monster truck, this kit improved upon the original Blackfoot with lots of hop-up parts.

This is one of my favorite kits from Tamiya. Although not the runaway sales success that the Blackfoot was, I felt that it had a better "look" than the Blackfoot. The Monster Beetle was based on the same chassis as the Blackfoot. Tamiya reused the casting for the Sand Scorcher body and created a new Volkswagen Beetle body for it.

Based on the sturdy Frog chassis, the truck featured a fully independent suspension. The front suspension arms and steering mechanism were beefed up to handle the forces incurred by having to drive the much larger (and heavier) tires.

In the rear, the mounting points for the shocks were modified to handle the longer shocks and greater torsional forces induced by the new monster tires. A cover was introduced to better protect the radio gear and mechanical speed control from the elements. A much better solution than the rubber balloon used on the Frog.

The rear drivetrain was taken directly from the Frog. Everything from the gearbox to the drive shafts were lifted directly from the older car. All of this was then topped of by a realistic Volkswagen Baja Beetle body done in ABS plastic.

The Monster Beetle was not identical to the Blackfoot though. Tamiya saw fit to upgrade a few of the items on the car. First, oil-filled shocks replaced the plain coil spring units giving it much better handling characteristics. Next they added a rear bumper and underguard for greatly off-road reliability. Finally, they gave the truck gold plated wheels and pin spike tires. The tires provided much better grip in loose dirt then the Blackfoot tires. Unfortunately the pin spikes wore out quickly as most people ran their buggies on hard pavement.

In the end, the Monster Beetle was only $20 more than the Blackfoot. A far better deal if you add up the numbers, but the Blackfoot still outsold the Beetle.

The Monster Beetle has "cross-market" appeal as a collectors item. First, the Tamiya fans of monster trucks; second, those that liked the original Sand Scorcher and see this as a "larger than life" version. Lastly, Volkswagen fanatics. Because of this, Monster Beetle prices are consistently strong. A new in box kit will go for about $450 to $500.

The car has great visual appeal and will always have a strong following.

The Monster Beetle had a few weak points. First was the rear drivetrain. The gearbox suffered from "separation slippage" where the gearbox halves would spread apart under torque and cause the bevel gears to slip and chatter. This was a problem with the Frog and the high loads imposed by the Monster Beetle’s large tires only aggravated it. Thorp’s aftermarket ball-diff and dog bone kit was very popular amongst owners.

Other weak points include the rear suspension mounts, front bumper and mounts, and slop in the front suspension. All of these were addressed with aftermarket parts, but for the purist it’s important to check on the condition of the original pieces.

The bodies of the Beetle tended to be fairly fragile in the front. Because it was adapted from the Sand Scorcher, some of the items were really "afterthoughts". The driving lamp mounts – for example – are extremely flimsy and it meant that the front grill on the Beetles were easily damaged. Although the Blitzer Beetle body can be substituted, it has different mount holes.

Many of the parts for this car have become difficult to get a hold of. The rear suspension arms, the body shells and gold plated wheels. Others are still readily found as they are interchangeable with the King Blackfoot or Midnight Pumpkin kits.