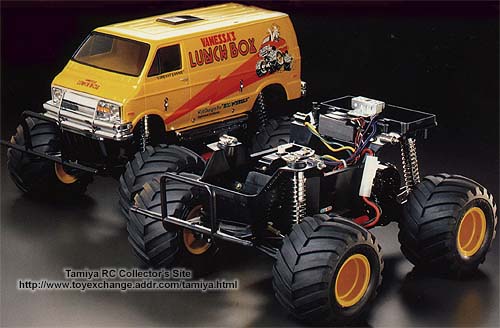 The Monster Van Lunch Box was kit number 63 from Tamiya. A 1/10 scale 2WD off-road car, it was designed as a fun wheelie vehicle

The Lunch Box could probably be described best as a cross between a Wild Willy and a Grasshopper. The "van" was designed as a fun toy with no real intention of ever racing or even going off-road in a serious manner. The lunch box featured a tail heavy setup with a wheelie bar which enouraged seriously wild handling.

The van’s front tires would leap in the air at the slightest touch of the speed controller. This tendancy was further amplified by the 3 step mechanical speed controller which lacked "finesse" plus the lack of any damping in the suspension system. Thanks to a wheelie bar placed behind the rear axle, the car managed not to flip on it's top. This car could barely be driven on hard flat surfaces, forget about any serious off-roading. The car exhibited heavy understeer with rather poor road control.

Despite the rather poor handling, this car really reflected Tamiya at its best: a highly detailed fun car that easy to build and great fun to drive. The hard plastic body was incredibly scale and detailed; as you would expect from Tamiya. Grill and bumper parts were molded in chrome and a tinted windscreen was included for added realism.

The use of the Grasshopper/Hornet suspension system made the drivetrain practically bullet proof. It was strong and easy to build. If the owner chose to add ball bearings, the drivetrain was virtually maintenance free and reliable.

The car was also great fun to drive. It popped wheelies all over the place and on smooth dirt surfaces it was great fun! But you did have to realize that you were not buying a race car. I think this was one of the problems with the Lunch box (and later the Midnight Pumpkin) is that people didn’t realize that the car was designed purely for laughs and not for real off-roading. Some owners became disenchanted with their cars after realizing the limits of the suspension system. Some chose to do major upgrades (oil shocks and grippier tires) while others just chose to dump theirs on the used R/C market.  Incidentally, the cheapest way to tame the handling problems was to strap a 4 AA battery pack above the front tires. The extra weight prevented the car from doing wheelies.

This car holds mixed appeal amongst collectors. But there is a significant number of fans for this kit. Unfortunately, Tamiya has recently re-issued this kit and as a result, values have tanked. Expect to pay $80 to $100 for a brand new unit. And with the exception of a new electronic speed control, it's almost impossible to tell them apart when built.

As I said before, the vast majority of parts for this car are still available new from Tamiya. This is because production of the Midnight Pumpkin only recently ceased. The body set and the mounting posts are the only tough to find items.

The body can be repainted, so don’t be distressed if the used car you’re looking at has a bad paint job. Paint can be removed or painted over. Check for the condition of the windscreen and chrome parts. Plus grab decal sheets where you can find them because they’re hard to come by.

A lot of parts on this car are interchangable with the Hornet, Grasshopper, Midnight Pumpkin and Mad Bull. Don’t worry if some drivetrain bits are broken.