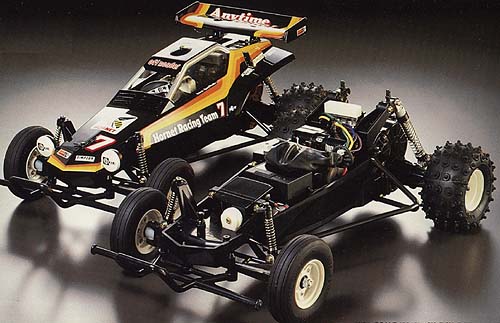 The Hornet was kit number 45 from Tamiya. A 1/10 scale off-road vehicle, the car was designed for the beginner.

Like many Tamiya kits, a basic model of a chassis would debut and then improvements were made with it and another model would roll out. The Hornet was such a model. Following on the success of the Grasshopper, the Hornet was released shortly after for those craving a bit more power and handling prowess.

The Hornet was basically a Grasshopper with all the hop up parts added on that Tamiya offered at the time. There are only three major differences. The Hornet sported a standard 540 size motor (the Grasshopper had a smaller 380 size) for better speed. To handle the upgraded power better it also came with pin spike tires and oil damped rear suspension. Lastly a lexan body was substituted for the hard plastic body for some added weight savings.

It became another runaway hit for Tamiya. I suppose in hindsight its success may have had nothing to do with any miraculous engineering feats but rather because the market was super hot at the time. It doesn't matter, because with a street price of about $85 when new, the car sold very well and was good value for the money.

Shortly after the release of this car, the market became flooded with competitors sporting the same chassis design as this car. Cars like the Rockbuster, Traxxas Cat, Nikko Rhino and the Road Runner II were soon released. Virtually identical to the Hornet these cars were sold at rock bottom prices. Unfortunately most didn't have the same build quality or replacement part support that Tamiya had and so were not really good buys.

The chassis continues on even today. After the Hornet came the Grasshopper II then the Super Hornet and many others.  The latest is the Mad Bull which still utilizes a very of the rear gearbox that graced the Grasshopper more than a decade ago. And as of December 2004, a re-release of the Hornet was made available by Tamiya.

I've said it before, a Tamiya car's collectibility sometimes has nothing to do with its performance. The Hornet's place in Tamiya history is established by the fact that Tamiya sold a zillion of these things. For those wanting to remember a bit of their youth, it's likely that it's the Hornet they remember.

However, Tamiya has recently re-released this kit. And the re-release differs very little from the original Hornet. In some markets, the new kit comes with an ESC (electronic speed control) as opposed to a 3 speed manual. But, some markets do not get this ESC.

You can expect prices to start collapsing on the Hornet and Hornet parts. New kits should go for about $150 and parts should start to become reasonable. Those holding onto to brand new body sets will find their value diminished to about $35.00.

These were beginner cars, they tended to get abused. It's really rare to find one in good condition. At the very least the bodies and tires are usually all used up by the time they hit the used vehicle market.

But with the kit re-released, parts should be easier to find. It won't be long before people start breaking up the new kits to sell on eBay for the parts.

Fortunately, the main drive train is very tough. The rear drive axle and gear set can take a lot of abuse. And with ball bearings they can be made to last a very long time indeed.

Check for original parts as buggies made by Nikko, World Engine & others were used as "donor" vehicles to keep that old Hornet running.