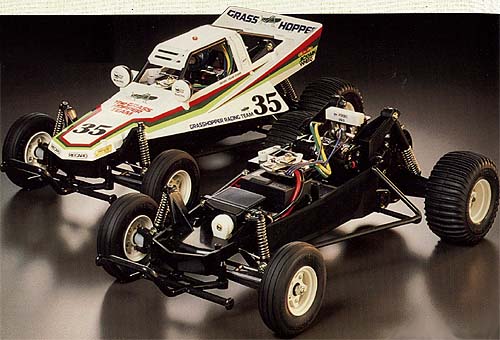 The Grasshopper was kit number 43 from Tamiya. A 1/10 scale off-road vehicle, the car was designed for the beginner.

Who doesn't remember the Grasshopper! For so many collectors growing up in the 80's, the Grasshopper was probably the first R/C car they ever bought. This car was designed for the beginner plain and simple. First, it was very inexpensive, the kit had a street value of approximately $60 dollars (radio and battery extra) which made it easy for those that were just getting into the hobby. Up and running with all the accessories, the car didn't cost much more than a "toy" car from Nikko or Radio Shack.

The Grasshopper featured a very simple construction process. To make it easy for the first time builder, the car was designed with a very low parts count. The suspension systems were designed with simplicity in mind more than performance.  Towards those ends, it was constructed with a solid rear axle and coil spring suspension only. A beginner could get a Grasshopper fully built in under two hours with a Phillips head screw driver and a hobby knife. Unfortunately, this simplicity of construction made the car a poor off-road vehicle.

I've driven a few of these and they bounce all over the place when you take it off-road. The suspension not only suffered from a lack of damping but bump steer was horrendous. Besides, the 380 motor was simply too weak to take the car through anything really rough. To the beginner though, it really didn't matter much, the car was built quite tough and could take most spills and bumps with nothing more than a few scratches. The rear end was bulletproof. If you've never seen a grasshopper rear end, you'd be amazed at the size and thickness of the rear drive shafts and gear set.

The Grasshopper was also one of the few "modern" off-road buggies from Tamiya that utilized a hard plastic body. It was heavy but tough, plus Tamiya molded it in white which meant that beginners didn't have to fuss with painting and cutting out a lexan body. Decals were applied directly to the unpainted plastic.

The original chassis would go on to serve a tremendously long life for Tamiya. It's simple construction and toughness would allow Tamiya to stretch the lifespan out to today. The Grasshopper would later give rise to the Hornet, the Fighter Buggy, Striker, Sonic Fighter, Super Hornet and MadBull.

The Grasshopper will never be remembered as a high-performance off-road vehicle. In fact, I'm convinced that most people ran their Grasshopper on pavement because of its handling deficiencies.

But it's collectibility has nothing to do with its performance. It's place in Tamiya history is established by the fact that Tamiya sold a zillion of these things. And given that most people collect because of a desire to rekindle some fond childhood memories, the Grasshopper is indelibly etched in minds of most enthusiasts now. And for those wanting to remember a bit of their youth, it's more than likely that it's the Grasshopper they remember.

Many original Grasshoppers were upgraded by their owners to 540 class motors. Finding the original 380 size motor and the Tamiya supplied adaptor plate can be a bit difficult. Ensure that the car you're purchasing has this motor.

Plus, the paddle style tires are hard to come by. Most owners upgraded to something with more traction and new sets are usually nabbed up by Sand Scorcher owners looking to restore their cars.