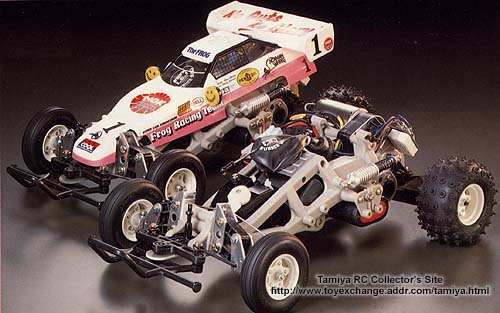 The Tamiya Frog was released in the early 80's. For its time it was an incredible car and a sales phenomenon! Finally, an off-road car that had a really good suspension system. Before this car, Tamiya concentrated mainly on making their R/C kits scale replicas of full size cars. This meant a lot of metal parts, limited suspension travel speed robbing weight. If you've ever owned a Rough Rider you'll know how heavy those cars were. Simple undulations in the dirt sent the cars flailing about and out of control.

The Frog was designed from a clean slate; it was not to be a copy of a real buggy. Tamiya lightened the car with plastic parts, increased the suspension travel with an excellent trailing arm system and strapped on over sized oil dampers to handle the bumps. Use of aluminum could be found at points where plastic would not do. The front of the undercarriage used an aluminum skid plate, a metal cross-member was introduced to reinforce the chassis and aluminum utilized at the trailing arm's pivot point.

The car wasn't perfect but it was much better than those that came before. Good enough to appeal to racers of the time, it wasn't unusual to see more than a few Frogs on the starting grid. Now, keep in mind that they weren't raced in stock format. The first thing that was modified was the front suspension which was limited and bouncy. The second was the rear gearbox and drivetrain. With high-powered motors, the gearbox tended to separate and stripped in no time. The hex shafts were no better, as they ground themselves to a nub.

Thanks to the popularity of the car, it wasn't long before aftermarket companies came to the rescue of racers with performance and heavy duty parts. Thorp created a ball differential and dogbones that were a direct replacement. Worked like a charm! CRP put out lighter and tougher bumpers, skid plates and suspension parts. Hot Trick even went as far as replacing the entire chassis with an aluminum one. Now add to this the flood of tires and wheels available and you have a car who's popularity starting to feed upon itself.

The car sold extremely well. By finding appeal with both racers and backyard bashers Tamiya was able to sell a lot of these. The Frog chassis design was also very strong and reliable. So much so that Tamiya kept using it for years to come in such cars as the King Blackfoot and Monster Beetle. Truly an evergreen chassis.

The historical importance of the Frog is high because it was such a significant change for Tamiya. It really marks the end of the "realistic scale" feel for Tamiya R/C. With the exception of the old Hi-Lux chassis, each chassis released after the Frog used increasingly larger percentages of plastic and less metals. It was also the first Tamiya which was truly competitive on the race track.

It's also significant because of the incredible lifespan of this chassis. From the Frog came the basis of the Blackfoot, Monster Beetle, Mudblaster and King Blackfoot. Although by the time the King Blackfoot was released the only thing left from the original Frog was the space frame chassis halves! Still, an impressive run.

Because of its high sales volume amongst "hardcore" R/C nuts, it has a lot of nostalgic appeal to collectors as well. Most remember owning one when it was new. In fact, many probably still run their Frogs from time to time. It's a real piece of history and is truly an anchor piece in any good Tamiya collection. Think about it, name one modern R/C car that uses "trailing arm" suspension anymore??

New in box examples are rare and prices increase accordingly. Expect to pay about $400 to $600 for a new in box example. Used ones can be had for as little as $25 depending upon condition.

The key to collecting a Frog is to ensure that all the parts unique to the Frog are still on it. Because of the longevity of the design and robust nature of the car, a lot of parts can still be readily found if you know where to look. The really tough parts are the lexan body, rear suspension arms, front and rear wheels (in the true white) and rear spike tires. They are rare and command high prices on the collector market. A new lexan body can set you back about $150 to $200.

A lot of Frogs were also modified with after market parts of the time, CRP and Thorp being the most popular. If you want a clean original Frog, you'll have to watch for these changes. When looking for parts, keep in mind that a lot of parts on the Frog are interchangeable with a lot of other cars like the Hornet, Blackfoot, Monster Beetle, Mudblaster and so forth.

EBay has fueled a lot of interest in the Frog and as such, numerous used ones are coming onto the market. Selection is very good for a used Frog and so buyers are advised to be choosey about their purchases. Remember that certain spare parts are very expensive and difficult to find. Tires, wheels and bodies are the most sought after spare parts.