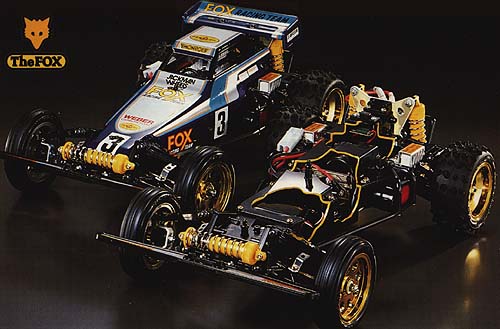 The Fox was kit number 51 from Tamiya. A 1/10 scale 2WD off-road car, it was designed as a true off-road race car and for its time, it found a large enthusiastic audience.

The Fox was a pretty nice car for its time. Borrowing more from their HotShot car design than the Frog (the other 2WD of the time from Tamiya), the Fox featured a suspension that was compliant and robust enough to handle off-road racing.

The Fox would be the first in a long long line of Tamiyas to utilize those famous bright yellow CVA shocks that would go on to grace many of its off-road vehicles including ones that are still in production today. Racers would complain that they didn't have nearly good enough tolerances and that the cylinders expanded in heat. But for hobbyist and beginners they were the easiest and best working shocks ever introduced. The variety of piston heads and spring pre-tensioners meant that the shocks could be setup in a dozen different ways to suit any track condition.

Rubber boots over the rear drive shafts also meant that dirt wouldn't get in to the drive cups and this prolonged the life of the units greatly. A massive front bumper and rear gearbox guard meant that it could handle bumping along the track as well.

There are only two real problems with the Fox; front suspension travel and access to the radio gear. The front suspension didn't nearly have the travel that it should and the car constantly bottomed out or got caught up on rough tracks. As since the design of the Fox was tailored after the HotShot, the radio equipment was sealed inside the chassis tub.

Great for keeping dirt out, terrible for making any minor adjustments or changing the crystals in race situations.

But still, it was race worthy and more than a few of us remember when you could find these cars on the track competing with Kyosho and Associated products. Mind you, most of the truly competitive "Foxes" were completely transformed with aftermarket parts. Companies like CRP and Hot Trick could radically change the look and performance of your Fox so that the only thing left was the gearbox casings!

There doesn't seem to be a lot of action amongst used Foxes that come up for sale. It's strange because it has a lot of historical significance. The car was a very good (and popular) 2WD car for Tamiya at the time. But traditionally collector interest has always centered around the 4WD cars and the Fox suffers from this trend.

Others say that the Fox was the beginning of the "all plastic" era of Tamiya and have resolutely stopped collecting Tamiyas at number 50 (The Wild One) saying it was truly the last of the metal era cars. For whatever reason, Foxes can be picked up for a fairly reasonable price in keeping with a used Tamiya.

Many parts are now very hard to come by. It's rare to see a Fox front bumper or side guards come up for sale now. Especially hard to find are new gold plated wheels that the car came with. The gold plating was extremely fragile and any restoration of a Fox will require that you purchase new ones and used ones cracked or faded with any use.

As well, many these cars were modified by owners a lot with after market parts. Ensure that the Fox you're buying is intact. Check for cracks under the front skid plate areas and along the sides where the nerf bars attach. Check that the body is a true Tamiya body. Back when the Fox was popular, companies produced "knock off" parts for the Fox and a lexan body was introduced called "The Killer". It was basically a Fox body but didn't have the correct sticks or detailing that Tamiya is famous for.