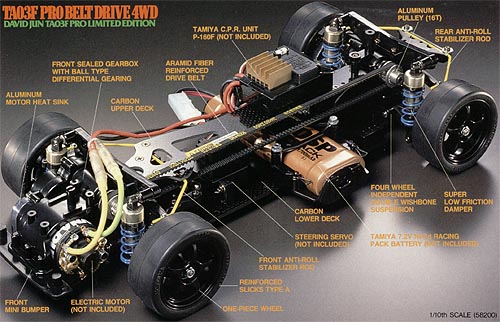 The David Jun TA03F Limited Edition was kit number 200 from Tamiya. A 1/10 4WD on-road car, it was a fully optioned out TA03F chassis.

** Motor, speed control and body are not included

Tamiya has a habit of coming out with three models for every popular chassis. The first, is the basic model, a plastic tub chassis with the minimum number of "go-fast" parts. The second, is a Pro edition which usually includes a FRP (Fiber Reinforced Plastic) chassis and other optional parts that improve performance and reliability. Lastly, a TRF (Tamiya Racing Factory) version which is every optional part Tamiya makes for the car in one kit. The TRF model, is normally the last one to be released.

The car reviewed here is the TRF version of the TA03F. Unlike previous TRF releases, the car was released under the "David Jun Commemorative" edition title. David Jun, was a Tamiya factory driver who drove the TA03 to an International championship title in 1/10 Touring Car class in 1996. This car features all of the optional equipment that David used on his championship ride.

The number of optional parts on this vehicle is amazing and represents one of the best "value for the money" kits that Tamiya has put out. To start with, the chassis is a double deck carbon fiber unit which is ultra stiff and light. Fashioned with typical Tamiya quality, chassis installation is a breeze. No misaligned holes or fitment problems to speak of. Tamiya went on to replaced the plastic oil shocks with ultra low friction aluminum units with tuned springs which were silky smooth in operation. For reliability, the front C-hub and rear bearing carrier were fashioned from aluminum. Plus, the front dogbones were tossed in favor of universal shafts. And similar to the Pro model, full ball bearings and ball differentials were included.

But the David Jun model also featured some more subtle enhancements as well. The original belt was replaced with an Aramid fiber belt. This allowed the car to run without a belt tensioner. The front gearbox featured a one-way bearing system. This gave the car better turning ability and sharper response on tight technical tracks. To handle the heat generated by modified motors, the front gear box contained an aluminum heatsink unit which helped dissipate heat better. Look closely and you'll see that the belt pulleys were now made of aluminum for longer wear.

The list goes on... from a heavy duty servo saver to tuned sway bars front and rear, Tamiya left nothing out. Of interest to trivia buffs is that the David Jun model is the only TA03F to be injection molding using black plastic instead of the usual grey. Important to note because replacement parts in place are impossible to find.

Handling wise, the car handled much the same way as the regular model. The only difference being a greater yaw sensitivity when braking into turns. Because of the one-way bearings on the front gearbox, turning and braking produces the same effect as pulling the handbrake on your full size car. The car spins around very quickly. In the hands of an expert driver the car became more responsive to directional changes. For the inexperienced, it could be a handful.

It is too early to predict collectibility for this kit. Based on past history with the TA02 racing kits, there should be a good market. The kit itself was thought to be rare because of the steep price, but apparently Tamiya of America had been sitting on a lot of unsold stock. This stock is now appearing on the open market at discounted prices. Hence prices are deflated. Expect to pay about $180 to $200 for a brand new one.

Given that the breakup value of the kit is closing in on $500, it's worth getting just for the hop-up parts.

Tamiya is not in the habit of naming their cars after sponsored drivers. Indeed, this is the first time that Tamiya has done so. This little historical footnote may be of interest in the future. But, the celebrity factor aside, the car is a phenomenal work of art. If you build one you'll know, they're amazing to look at once done. The use of multiple materials makes the chassis that much more interesting to simply stare at.

Used TA03F David Jun models should be approached with some caution. Not because of any reliability issues, but rather that the cars get used very hard. Check to make sure that the drivetrain rolls smoothly with a minimum of noise (remove motor first), noisy drivetrains indicate shot bearings, gears or worse.

As a whole, the TA03F cars are reliable long wearing cars. They feature a closed gearbox design which avoids the problem of having debris get in and corrupt the gears. The single belt drive is mounted fairly high on the chassis and greatly reduces the chance of picking up unwanted debris.

Check that the full suite of hop-up parts are still on the car. Sometimes people will strip things such as the expensive aluminum shocks to use on other vehicles. For the collector, the black molded parts for the David Jun model are difficult to get. Racers that have wrecked their car a few times would have probably replaced it with normal grey parts. Something to note.