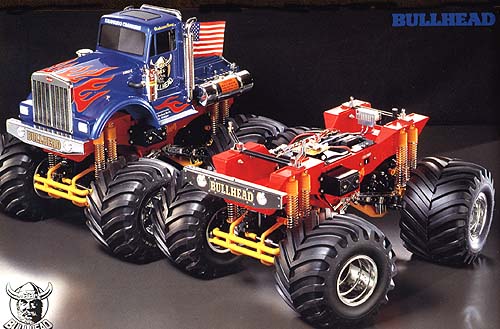 The Bullhead was kit number 89 from Tamiya. A 1/10 4WD, 4WS off-road monster truck, it was designed as a fun on and off road truck for kids and adults alike.

The Bullhead answers the question of whether customers buy Tamiya’s because of their looks or their performance. The Bullhead – which was structurally identical to the Clodbuster – undersold the Clodbuster by about a zillion to one. It just never captured the imagination of the buying public like the Clodbuster did.

Built on the same chassis as the ClodBuster, the Bullhead had Grasshopper front and rear gearboxes with twin motor, four wheel drive layout. Paired with oversized rubber tires, a built Bullhead was a site to behold. It was HUGE compared to a regular off-road buggy, weighing over 10lbs and about as wide as most buggies were long.

The Bullhead notched the trim level one step higher than the Clodbuster with many of the components either brightly colored or chromed. The chassis was bright red and the shocks were now molded in yellow. Suspension arms and wheels were decked out in high-tech chrome. It was a marvellous looking piece of machinery.

When I first assembled a Bullhead I swapped the coil springs for Tamiya CVA oil dampers only to discover that it made no different in the handling. Most of the weight of the Bullhead is located in the drive assembly; the tires, gearbox and engines are all hung off the shocks. The tub chassis carries only the radio gear and battery pack.

Two things will surprise you about the Bullhead. The car drives faster and turns sharper than expect, it’s not surprising to find that most owners have tipped their car over on the first run because they expected the car to understeer more dramatically. The second thing that’s surprising is that the battery lasts longer than you would think because of the two motors.

The Bullhead is going to be pretty rare because it just wasn’t popular when it was released. In terms of historical significance though, it’s low. There are no new engineering achievements with this truck; it’s an exact replica of the Clodbuster.

The Bullhead was an exceptionally tough and reliable truck. The use of Grasshopper gearboxes at either end made the drivetrain basically bulletproof, even when owners installed high-output motors. The only weak point to the chassis is the tub chassis itself. Because of how items mounted to the chassis, it tended to crack and rip at the mount points.

With the exception of the body, most parts are interchangable with the Clodbuster. Provided of course that you’re not fussy about the colors not matching. Check that the car is all original. As you can imagine, the following generated by these monster trucks led to a lot of modifications and aftermarket parts. Although many of these items were indeed more reliable and stronger, they aren’t made by Tamiya.