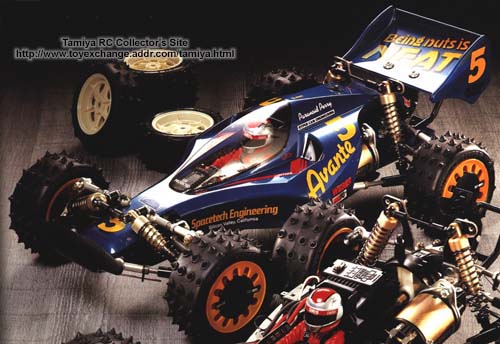 The Avante was kit number 72 from Tamiya. A 1/10 scale 4WD off-road car, it was designed as a true competition off-road car for the experienced hobbist.

This car was Tamiya’s response to the numerous "serious" competition off-road racers that came out on the market in the late 80s. If you remember the late eighties then you’ll remember that Tamiya cars were non-existent on the competition circuit. The Frogs and HotShots had been replaced with Yokomos, Kyoshos and Associated Electric products and Tamiya was no longer considered a serious contender.

The Avante was suppose to change all that, it would bring Tamiya back to the forefront of technology once again. A completely new design, Tamiya re-introduced the use of exotic materials into a radically different chassis design. Made primarily of aluminum and FRP parts it was a departure from the plastic-only kits that dominated the model lineup of that age. The kit was to be stronger and more adjustable than any other car. Sporting features such as oversized aluminum dampers, adjustable upper turnbuckles and an ultra stiff FRP chassis, the Avante had all the right parts.

Although innovative, the car was also mostly an unproven collection of paper designs that didn’t come together into a competitive car. The aluminum parts were too soft and broke often, the front suspension bottomed out with alarming regularity and the handling was not up to spec when compared to cars of the time.

Couple this with the sheer expense of the kit ($300 when it first debuted), the car was a sales flop. Although Tamiya would later use the design (albeit with a lot of plastic parts) in a few other cars, it never did make the impact in the racing world that Tamiya had hoped for.

Having said that, I don’t want people to think that this was a terrible car. In fact, quite the opposite! It was a marvellous tour-de-force of high-tech materials coupled with that incredible engineering expertise that Tamiya was known for. No other company could have put out an Avante other than Tamiya. Tamiya managed to make a car out of exotic and tough to work with materials that was as easy to assemble as any of their all-plastic kits. No other company could have accomplished such a feat.

The car also had many innovations which we would later see in other more successful cars. The engine is mounted amidship and parallel to the centre drive shaft. This simple and efficient design can now be seen in the latest Associated TC3 on-road car. The use of foam inserts in the tires, the rear wing’s attack angle could be altered and the use of a ball differential in the rear.

As a completely new design and a rare one at that, this car holds a very signficant place in Tamiya history and examples that come up on the market are highly collectable. Because of the rarity of the parts for this car. New-in-box examples tend to fetch considerably more than other models of Tamiya cars.

A partial failure for Tamiya but an incredible example of Tamiya’s engineering prowess.

In North America the kit was available with or without the Technigold motor. Since this motor is a highly desirable option, the presence of this motor is a much added plus to the value of the kit. The kit was also quite complex, so an instruction manual is desirable.

Most people that built the Avante found that the car lacked space for an ESC and receiver and ended up tossing the driver/cockpit detail piece in favor of more room. For completeness, make sure that the car has this piece.

I would recommend against purchasing any Avante that appears to be missing parts. Parts are extremely difficult to come by and restoring a partial car can prove very costly or even futile.