All these words describe about the same object: the one that allows us to remotely control our models. In this guide, I will use the word Transmitter, as Radio is is commonly used for broadcasts and Remote to control devices such as the TV

. Whatever you want to call it, this is what this RC Tech Guide is all about.

So here, we are going to talk about stick radios, pistol radios, trigger and so on... those things we need to control our RC models.

These devices evolved a lot over time, that's why we will start with a short historical reminder that may take you much further in the past than you would expect. Next, we'll talk about the different frequencies before we review the main functions of a transmitter and how to use them.

History of the transmitter (and of RC)

The inventor of RC is one of the greatest scientists the world has even known, one of the few men who make the human civilization go one step further during their life and other steps further decades after they passed. RC is only one in over a hundred of his inventions, may be one of the less significant when considering many others of his inventions were major steps for the technological evolution of our civilization.

This genius compares to inventors such as Thales (mathematics), Archimedes (pulley, lever, catapult...), Da Vinci (helicopter, tank, submarine, loom, robotics...), Berners-Lee (Internet). However, he's somewhat unrecognized because many of his inventions are wrongly believed to be Edison's (phonograph, electric lamp, motion picture camera, microphone...), another genius with whom "our" genius worked. This last hint should have driven most of you to the name of the inventor of our hobby: Nikola Tesla.

In fact, Nikola Tesla invented the remote control and made the first demonstration of a remotely controlled object in 1898. As a matter of fact, it was a small scale boat, as the documents below show: I recommend you to click on the photos to display them fully because there are more than I could show on this page.

Several years later, there are evidences of the first transmitter in France around 1905 by Edouard Branly to control various electrical devices (lamp, fans: the first steps of home automation). In Italy, Ermanno Fiamma will solve hertz waves interferences for a military project in 1924. From the end of World War II, the first transmitters are used in RC: at the time, technology only allowed the device to work in "on-off" mode (forward / stop / reverse, left / center / right). For cost, solidity and ease of use reasons, you can still find RC toys with this kind of basic commands nowadays: they are mainly made for very young kids.

It is only from the mid 60's that the first proportional transmitters hit the market, allowing to gauge the commands. However, the price being tremendous (about the price of a scale 1 popular car at the time), RC pioneers often built their own equipment from parts. This is when the first regulations appeared to control the use of frequencies. In many countries, frequencies and rules of usage were under military authorities control before the civilian post and communications authorities took control of them. These regulations still apply, from the different bands usage to the power of transmitters.

The transmitters that prefigured the one we are using today appeared at the beginning of the 70's: no surprise, electronic components miniaturization has improved a lot since then. Reliability too, but reverse since these prehistoric transmitters still work (yes sir!):
In order of appearance, a Varioprop set (beginning og the 70's), a Futaba / Robbe set (end of the 70's) and a direct comparison between a receiver from the 70's with a modern unit:

I want to thank alf77 for these photos from his vintage transmitters collection (and for explanations on how they work). I recommend you click the photos to see them full-size because they are true museum pieces. The last photo amazingly compares a circa 1972 receiver with a modern 2.4GHz receiver.

Still for the contrast, here are two modern transmitters that perform the same operations (among others): 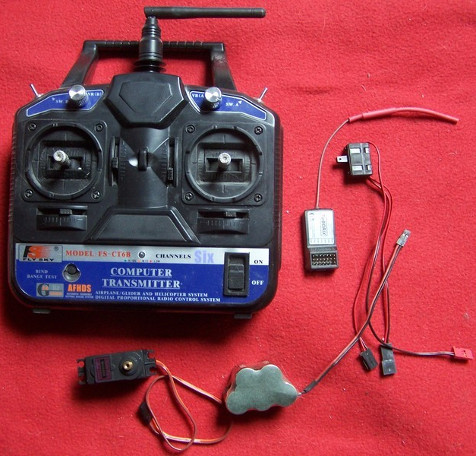 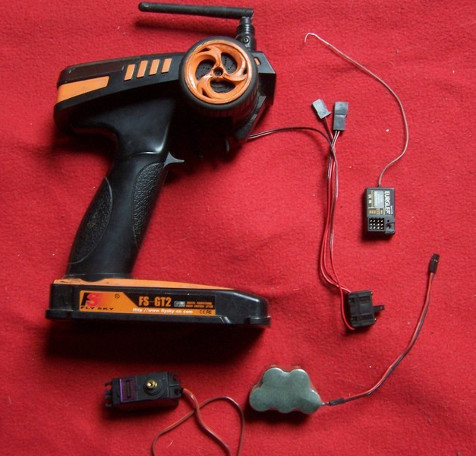 We're done with the transmitters historical aspects and the tribute to the inventor of RC. We are now going to review the concrete questions about frequencies before we review in detail the main functions of modern transmitters.