The story begins in 1980 for Tamiya with this platform, one or two years before in RC history (mainly due to Kyosho and Associated). Historically, RC is 1/8th scale and gas-powered in the 70's, either on or off-road. To make it short, big heavy models, powered by not very reliable motors that needed to be big enough, so heavy, to move the machines.

Miniaturization of electronics (especially radio), battery packs improvements and the use of period dot-printer motors will allow a new category to emerge. This new category will literally reign on the RC in the first half of the 80's, before it almost disappeared due to the buggy craze. The new category is 1/12th scale and on(-road only: the chassis are the most basic they can to keep the weigh low... and amazing performances either in speed or handling for the time. Because at the time, the reference is gas-powered: big heavy models that can drive fast, but far from responsive.

For their debuts in RC, Tamiya used the 1/12th scale, but with bodyshells borrowed to the static series, so they were fragile, in plastic (ABS) and quite heavy. In fact, the bodyshell scale determined the chassis', but Tamiya's first models were absolutely not 1/12th Pan-Cars. Sometime after their debuts, Tamiya introduced a first series of chassis that were better suited for racing, but they are 1/10th scale Formula 1: not quite enough yet to enter the 1/12 Pan-Car category that more and more people like.

But in 1980, Tamiya finally joins the Pan-Car fiesta when they introduced their 58021 Can-Am Lola (Racing Master) model. Racing Master is the name given by Tamiya to models dedicated to this category: the least you can say is that Tamiya is ambitious with this name. 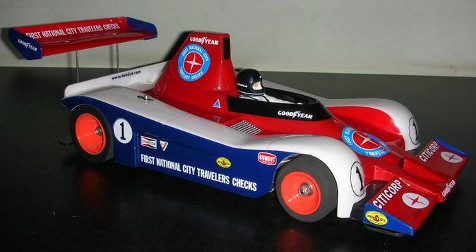 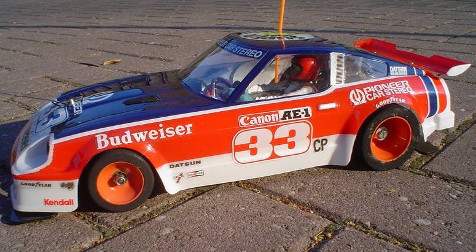 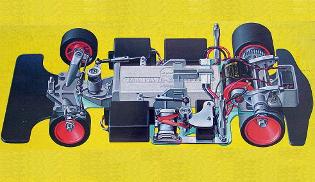 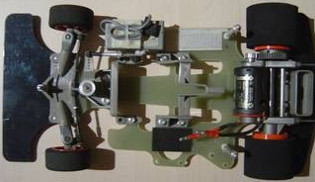 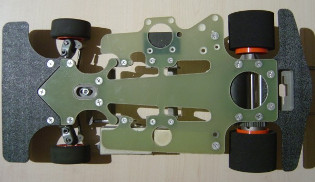 This model is one of many firsts, proving Tamiya's ambitions:

Unfortunately, Tamiya over-engineered the chassis: it is way more complex and heavier than competitors who stick to simplicity and lightweight. Not forget all these firsts and innovations have a direct consequence on the price: Tamiya's RM Mk.1 is about twice more expensive than competitors. This commitment of Tamiya designers to “hit hard” with over-engineered chassis designed to become the reference in a category will happen more than once in Tamiya history, not often with concrete and convincing results from the start.

The Racing Master 2 is the economic counterpart of the first one: stock Mabuchi 540 motor, plastic differential (much lighter, but less resistant) and no ball bearing. Obviously, Tamiya dedicate their first Racing Master to high-end racing and the second is targeted at a wider public.

There are similarities between Racing Master and F1 chassis, especially the epoxy plate and the shape of the gearbox. This is no direct transplantation, but the Racing Master can be seen like a shrinked F1 Competition Special chassis. 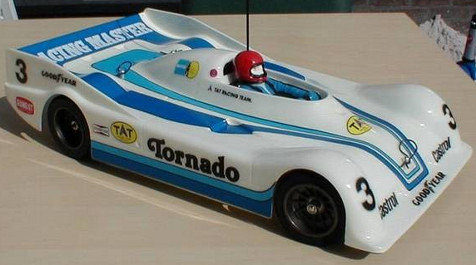 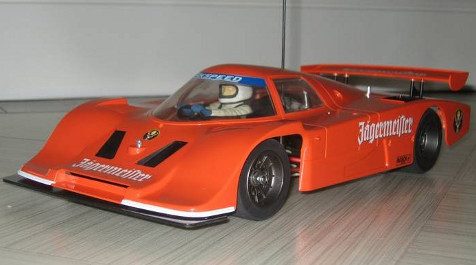 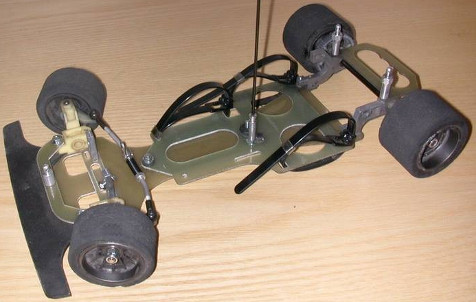 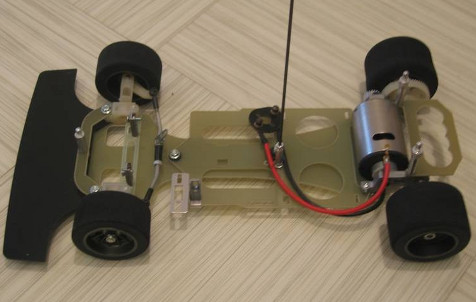 Since the first Racing Master release, Pan-Cars are even more popular and new manufacturers offer models. Tamiya learned from their mistakes from the first version: the new chassis was made much more simple, but most of all, it was made much lighter. The front drivetrain now copies the simpler F1 Competition Special chassis and the rear pod has been on a serious diet. Somehow, the version 3 better looks like a step back than an improvement: but the fact is that is much better suits the category standards.

As for version 4, it mimics the previous generation: the Black Motor is replaced with a stock Mabuchi 540 to minimize costs and to offer a more economic version. By the way, the Racing Master Mk.4 carries an ABS bodyshell, which probably influenced the final price of the model, but which made it heavier too (about 200gr, that is 20% of additional weight).

Two years later, Tamiya successively released versions 5, 6 and 7 of the Racing Master series: no one knows yet, but they will be the last. 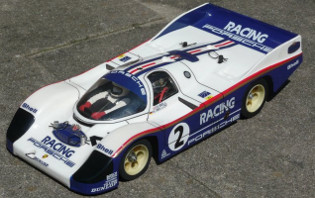 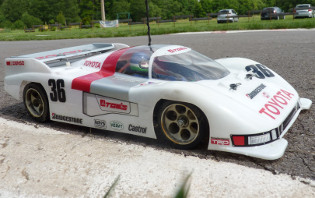 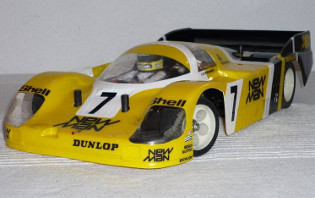 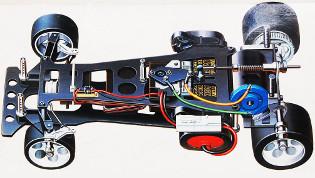 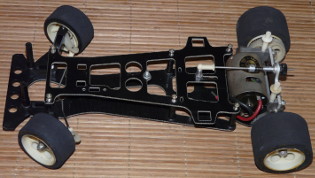 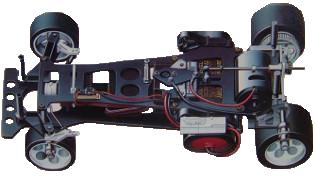 Again, this is an entirely new design introducing an FRP double-deck and a more sophisticated suspension system compared to the sole chassis flex on previous models. This dampening system will later be borrowed by the new Formula 1 Road Wizard chassis. Tamiya also reintroduced an adjustable steering geometry that was abandoned on the previous generation. In versions 5, 6 and 7 flavors, the Racing Master chassis is really fast, it performs really well too but it is somewhat fragile when hit hard. As for the amazing bodyshells, their front and rear over-hanged sections made them prone to rapid destruction.

This is year 1985, the beginning of the massive buggy craze that will last until the late 80's: the attention of the public and the manufacturers are only focused on buggies. Suddenly, the previously successful 1/12th Pan-Car turns is added to the endangered species list: many manufacturers who specialized themselves in this category will disappear because we won't hear much about on-road models anymore before the beginning of the 90's.

Years go by... up to 2011 when nobody expected Tamiya to introduce their new 1/12 Pan-Car chassis, the RM-01. The acronym says it all about the 80's Racing Master heritage, but to make sure everyone understands, Tamiya fits the two first models of the series with period bodyshells. Even better: the very first model is presented only with the period boxart representation in their catalogs and internet websites. 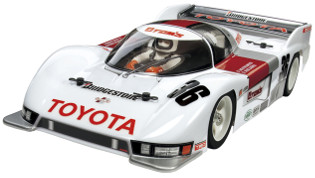 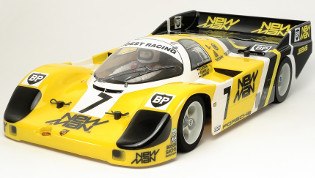 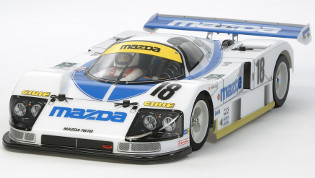 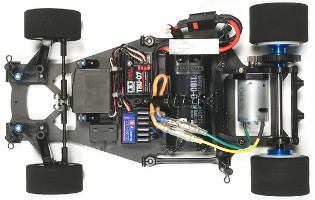 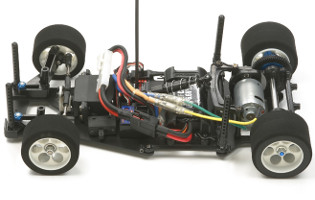 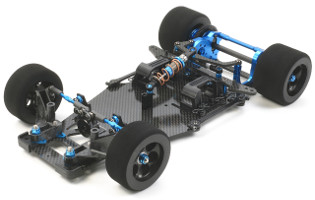 Hard to say whether this chassis is already a commercial success and if it revived the 1/12th Pan-Car category somewhere in the world. To my knowledge, this has not happened (yet?) in Europe. However, because Tamiya released a first chassis evolution in 2013 (the one that introduced the Pillow-Ball-Rear-Link technology borrowed by the F104 vII), development for this chassis seems to be still going on. Which would mean the chassis found its public.

Conclusion about the Racing Master series

Queen of categories during the first half of the 80's, the 1/12 Pan-Car disappeared when the buggy craze started. These cars were basics but performed extremely well due to they light weight. At the time, most of them were running on the closest piece of asphalt, often parking lots, and were rapidly showing their limits due to dust and pebbles. At club level, these cars were real rockets thanks to the good tracks and because they were the fastest models and the highest performers at the time.

The series made by Tamiya for this category lasted as long as the Pan-Cars lasted in the public heart, and then they disappeared from the offering. It is interesting to contemplate this series decades after because for the first time, it shows how Tamiya acts to enter an existing market. For example, the Can-Am Lola RM Mk.1 reveals two interesting facts: first, Tamiya designers skills in developing a chassis carrying a level of innovation and engineering never seen before. Second, the gap between these specifications and the market level of expectations, either for complexity or price tag. The rest of the series unveils other interesting facts: Tamiya's envy to offer both high-end models (Can-Am Lola) for racers and entry-level models (Datsun 280ZX) for beginners. Also, the series shows Tamiya's capacity to re-adapt fast according to the market expectations and previous mistakes (the Tornado RM Mk.3 correcting the Can-Am Lola technical and price excess). Then, the third generation (Mk 5, 6 and 7) represent maturity: the chassis performs extremely well, has innovations (FRP decks and plastics when other manufacturers are still struggling to abandon the metal-epoxy duo). Unfortunately, it is too late: from 1984-85, the RC market massively goes for buggies.

Nonetheless, the 1/12 Pan-Car category never ceased to exist: it simply became more confidential, just like other RC niche markets such as public works or tanks (in different manners). Today, Pan-Car is a specialists category counting few fans, using special material (chassis, tires, batteries, speed controller) and requiring a very technical and demanding driving skill. But, it looks like this category of true passionate people managed to keep some kind of the true “spirit of RC” from the late 70's beginning of 80's, when most drivers were less selfish and when helping others, especially beginners, was the rule.

This is the market niche Tamiya joins again 25 years after leaving it. Hard to say if it means the 1/12 Pan-Car is awaking from a long sleep, knowing that Associated and Kyosho never abandoned it, or if this is only a new diversification for Tamiya. Anyway, Tamiya's approach is interesting: a new chassis offered with period bodyshells for everyone to remember the Pan-Car glory in the 80's. Pretty surprising and offbeat, this strategy is quite attractive anyway. Especially since it looks like the RM-01 was not over-engineered and because reports says the RM-01X evolution brings the chassis performance close to the category's best.