The name of this platform means Touring Trainer because it is meant for Touring beginners: from 2003, it is the TL-01 successor. This platform is of great commercial stake for Tamiya, so it is very interesting to understand how they set up this strategy.

The first version named TT-01 will be used until 2007, then came an E version (for Enhanced) that could be considered as version 1.5. This improved version will last until 2013. Each one of these versions will have a variant dedicated to drift.

Overall, the TT-01 (including E and D versions) will count up to 83 different models released in a 10 year period! Which is about 1/3rd of all Tamiya offering over the period. Not counting all the RTR models based on the TT-01 (all variants) in the XB Pro series.

To this, I would also add another chassis: it is the buggy variant, despite not being named TT-01. 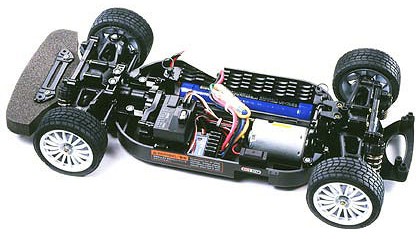 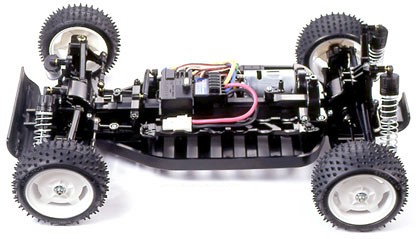 Even if the overall chassis layout is reversed (location of the battery and motor / steering system), and the shape of the central bathtub is different, this buggy also all the genes of the TT-01. It is to be said that Tamiya never linked these two platforms, but the lack of a TT-01 buggy variant and the similarities with the DF-02 do not leave much room for doubt.

Tamiya kept the shaft-driven transmission, less complicated, more reliable and less sensible to the lack of maintenance on a chassis aimed at beginners. The monocoque frame is replaced by a bathtub design like it was used at the origins on the TA-01 and TA-02. But one of the TT-01 marvels is the mirror factor: if you have a close look at the chassis, you will notice the front and rear gearboxes are symmetrical (except the steering part, of course). This symmetry allows to use exactly the same parts to built the front AND rear gearboxes, at least most of them (again, the steering at the front implies differences). So you can produce one unique part tree from one unique mold: you just need to place two of this part tree in each kit box.
For your information, making a mold is extremely expensive, and you also need a press machine to activate each mold. Can you imagine the fiesta at Tamiya's financial department when someone said production costs would be cut by two or so?

The main difference between the TT-01 version and the improved TT-01E is a better steering system (borrowed from the TA-05). Another change is the rear arms that can be flipped to reduce the chassis wheelbase to 251mm so “short” bodyshells can fit like the 58442 Team Studie GLAD BMW Z4. On the TT-01E version, something is new: a transponder stay molded onto the upper deck. This addition proves that many people like the TT-01 to begin racing.

The strategy previously used with the TT-01 is the same:

But it is even better:

The TT-02 chassis is a tremendous challenge for Tamiya because the TT-01(E) reigned for 10 years and the TT-02 needs at least an equivalent success.

Conclusion about the TT platform

The platform is a formidable challenge for Tamiya, both industrially and economically when you consider the number of models and their share in Tamiya's offering.

When considering the origins of the entry-level Touring platform, Tamiya had separated the buggy (DF-01) from the on-road models (TA-01 / TA-02) and trucks (TA-02T). Probably, this choice was made because buggies were almost the only models Tamiya offered in their catalog at the time. With the TL-01, Tamiya increased the offering by including the Stadium and buggies under the same chassis name in order to make the offering global and easy to understand for customers, but these variants didn't seem to be a success. The reign of the TT-01(E) was only on-road with a drift variant, but buggies were apart under the DF-02 chassis name (may be because of the different bathtub) and Trucks never existed (DF-01s and TA-02Ts were relaunched to fill the gap). With the TT-02, Tamiya unifies their offering including the on-road, drift, buggy and trucks variants under the same chassis name because the chassis design is always the same. A new rally variant may even complete the offering some day.

Reviewing this platform makes it easier to understand Tamiya's strategy for the entry-level Touring segment. The objective is to fulfill almost every need in terms of usage, but also to satisfy almost every taste thanks to an abundant bodyshell offer. Commercially, this is a formidable strategy, but it first settles on a incredible know-how in designing an economic chassis that is such a versatile platform. To my knowledge, this had never been seen before in RC.