The name of this platform means Touring B, just because it came after the TA series in Tamiya's offering. No relation with either the real GroupB (for on-road GTs) nor the Rally GroupB (when the fantastic Peugeot 205 Turbo 16 and Audi Quattro ruled). The main characteristic of this platform is the return of the 4WD shaft-driven transmission after it was abandoned on the TA platform when the belt-driven TA-03 was released.

This was year 2000, about 7 years after Tamiya designers worked for the last time on an electric-powered 4WD shaft-driven on-road chassis (the TA-02 in 1993). 7 years: ages, an eternity considering the Touring category has improved a lot, and Tamiya perfectly knows this since their TRF41x is already under development and aimed at reaching the best of the Touring category.

This is the reason why the decision was made to use the basis of another platform that was just released: the TG10-Mk1, a 1/10th scale gas-powered shaft-driven Touring chassis, a chassis which is a “shrink” of the 1/8th scale gas-powered TGX chassis. As a side note, it means that Tamiya wanted to introduce their successful 1/10th Touring category into the gas-powered market too (which is traditionally 1/8th scale).

Of course, this is not only about swapping the motor: nonetheless, all the gearing part (front and rear gearboxes) are re-used to make the TB-01. This explains some of the main TB-01 characteristics: an extremely solid transmission (somewhat over-sized for electric-power use) but most of all, a very substantial weight (which is the consequence of the previous).

The first model to use the new TB-01 chassis is the 58257 Mitsubishi Lancer Evolution VI WRC kit released in 2000.

Six out of eight models based on the TB-01 chassis were offered with rally bodyshells, domain in which the TB-01 was definitely gifted. It featured a chassis cover and sponges all around the steering system to preserve from dust and pebbles.

The TB-02 is the public version of the TB Evolution III we will review right after: just note it reuses the TA-04 chassis damper mounts, something that will happen on the next generations too, probably to save costs and certainly because the TA platform is the priority for Tamiya. Anyway, this TB-02 version settles the end of the rally abilities seen on the TB-01 and the series will now on focus on a strict on-road racing usage.

The TB-03 is an evolution featuring the IFS system (In-board Front Suspension) seen before on the TA-05 chassis, together with parts directly coming from the racing TRF416 chassis (front and rear uprights). For the first time on this platform, a special drift version of the chassis is offered.

The TB-04 will follow, mainly bringing a new chassis layout to modify the weight distribution due to the use of LiPo batteries. The TB-03 suspension arms are re-used on this generation, and were also used on the TA-05vII chassis.

In parallel, Tamiya worked a lot on the TB plateform racing version, bringing a new generation almost every year at the beginning, and then at a much slower pace. This explains because of the lack of results: Surikarn Chaidajsuriya (the 1st world champion in 2002 with a TRF414) won the 2004 International Championship of Thaïland (Reedy Race). And that's it, the TB Evo series has no other victory or promising result on the international scene. However, this victory is very important for the image of Tamiya in Asia, and this winning TB Evo III will be granted a special limited edition release to celebrate the victory and the driver. 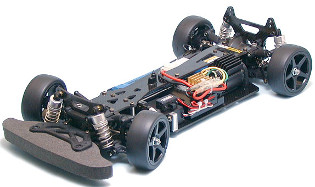 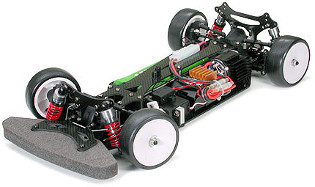 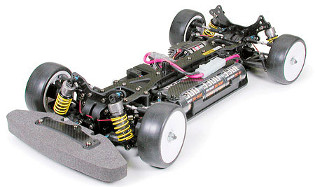 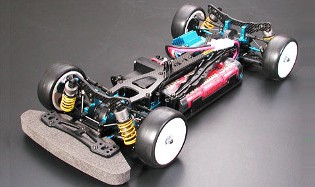 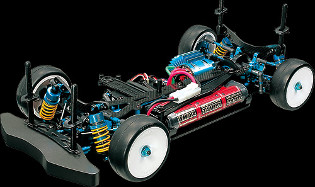 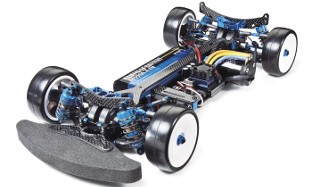 It seems obvious Tamiya made an attempt to develop a second high-performance series with the TB Evo series, but not using the TRF organization. It sure didn't work as expected, even if the chassis in this series all provide good performance, but not enough to pretend to world championship titles. This probably explains why there is an 8-year gap before the release of TB Evo generation 6. For the moment, it is difficult to really evaluate the level of performance of this new generation, or if it means that Tamiya wants again to develop an alternative to the multiple times world champion TRF41x series.

Conclusion about the TB platform

For the return of the original 4WD shaft-driven technology in the Touring category 7 years after abandoning it, it seems that Tamiya didn't want to take big risks. For a long time, the TB-01 remained as one of the best chassis for rallying purpose, despite its weight limiting its performance. The TB-02 was somewhat non-significant, just like the TB-03 except in its drift variant. The TB-04 is still too new to say anything about its success or future.

In short, the TB series features chassis with correct performance and well suited for leisure use, especially for people running outdoor (shaft-driven transmissions are generally less fragile when dealing with pebbles than more exposed belt-driven transmissions). As for the Evo series, it is not worth winning a world championship, but do not forget there is only one world champion every 2 years. For the rest of us, we generally don't have the required skills to drive faster with a TRF41x than with a TB Evo.