The name of this plateform refers to replicas of real cars that belong to the Group C series. This series existed from 1982 to 1993 and counted different endurance races like the Le Mans 24 hour race. As for the Tamiya models, the name is due to fans since the vast majority of the models were still released before Tamiya started to give names to their chassis.

We are year 1990: the RC market is about to be again in turmoil after living the 1/12 Pan-Car then the buggy golden eras during the 80's. At the time, Tamiya's offering for on-road vehicles is limited to the few models available from the modern F1 platform. This is the moment Tamiya chose to design a new platform by merging the know-how they previously acquired with a new platform under development.

Somehow, this is why this new GroupC platform can be considered as an extension of the Racing Master series, despite 5 years and a different scale. The designers will merge the last Racing Master generation front drivetrain with the improved F101 chassis rear drivetrain, and use a modified DF-01 central bathtub to build the new GroupC. To make it simple:

Of course, this is not an exact match: better said, these are adaptations of different chassis parts from different platforms. Roughly imaging this, here's the union between a Racing Master mk.5's front drivetrain fitted to the DF-01's chassis, the whole thing being propelled by the F101 rear drivetrain. For a direct comparison of the three main chassis parts, I cut a GroupC chassis image to show the parallel.

Surprising result, and of course, the first assembly can't fit together, even if you pour it with glue. But the general idea that lead Tamiya for the GroupC chassis design is there. After this artisanal work, let's see what real engineers did: 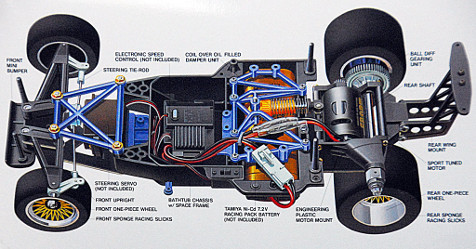 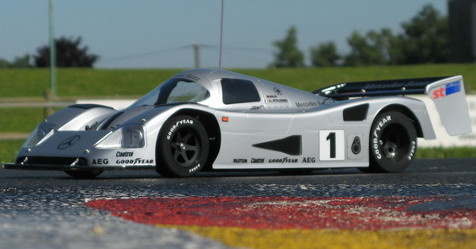 The GroupC chassis is the successful conclusion of the platform initiated by the Racing Master back in 1980: only 8 models will follow the 58088 kit without any modification to the original chassis. There are two "waves" in this chassis production, the first row with 7 models between 1990 and 1992, and then a second one in 1995-1996 but with specific bodies: these are bodies made by Parma, not Tamiya.

Conclusion about the GroupC platform

The GroupC platform was probably meant to transpose to 1/10 scale what was left from the 1/12 Pan-Car category, Tamiya joining (to my knowledge) an attempt made by Associated with their RC10L in 1989. We can suppose these manufacturers were willing to “bring back” the 1/12 Pan-Car into the 1/10 scale in order to unify the scales they were working on to facilitate the work of designers and to share parts between their different product offerings. Mechanically, the scale change would have allowed to merge development and manufacturing costs, so an overall cost reduction.

Even though the GroupC was quite a commercial success for Tamiya, it mainly pleased new and existing clients of the manufacturer. 1/12 Pan-Car fans mostly didn't make the step to 1/10 scale, either with Tamiya's GroupC or Associated's RC10L. In the end, the 1/10 Pan-Car GroupC had quite a short life whereas the overall 1/12 Pan-Car market continued to live its life, definitely in a confidential manner, but still active up to now.