I kept the best for the end: one platform that resembled no other one, that shared nothing with previous or next ones and that was only used for two models. For the records, this was not the model celebrating the 10th Anniversary of Tamiya in RC, this was the role of the Bigwig. However, this project was long prepared by Tamiya: the number given to the kit was no luck. And the least we can say is that Tamiya designers had a great time developing this jewel of technology which is the personification of Tamiya's ultimate know-how at the time, both in chassis design and lexan molding.

This chassis did not fit in Tamiya's strategies, either industrial or commercial, and yet, it was extremely important. In concrete, this chassis had no direct influence over the production of other models, to which it borrowed no parts at all and to which it passed none either. Nor was it a best-seller, far from it: apart from Tamiya themselves, no one can say whether they made money or not out of it, but it is highly questionable when considering the probable design and production costs.

The worst may be that, honestly, this chassis was good for nothing: it was too fragile and too complex, either on or off-road, for racing or just for leisure usage. The best it could serve for was window display, at least for the happy few who could offer it. Strange manner to present one of the most iconic models from a manufacturer and in RC in general. Isn't it?

Yet, this chassis, and more specifically the first out of the two models using it, has a formidable value in collectors' heart (and bank account). It is also very much appreciated by static model fans, not counting too with Porsche fans in general. For Tamiya, and for RC in general, it was the masterful demonstration of cutting edge know-how, very much in advance for the time, both concerning the chassis in itself and the bodyshell including its innovative molding technique.

This atypical model was the 58059 Porsche 959 Paris-Dakar Winner kit released in 1986, and to a less extent the 58064 Toyota Celica Gr.B Rally Special kit released the year after on the same chassis (featuring slight differences). 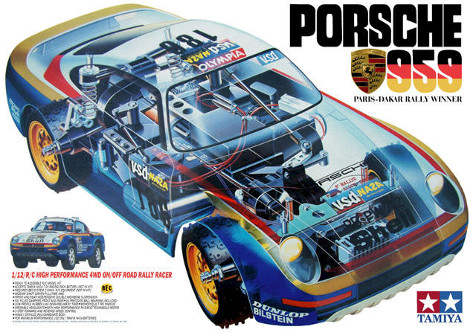 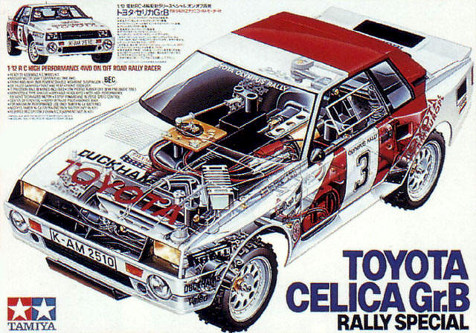 These two models were 1/12th scale, which is a detail of great importance because of it direct impact on the chassis complexity, and as a consequence, on Tamiya's tour de force. Remember, at the time, electronic speed controllers did not already exist: so on this chassis, designers had to fit 2 servos (steering and throttle), the mechanical speed controller, a double whishbone hydraulic suspension system, the battery tray and a 4WD shaft-driven transmission. All this into a 1/12th chassis, that is a 211mm wheelbase and overall dimensions of 381mm long and 172mm wide. In short, this chassis is the most complex and hard to build ever released by Tamiya at the time. Everything, from the overall chassis layout, the wheels and tires up to every single part was exclusive to this chassis and will remain so. Apart from the RX-540VZ Technigold motor borrowed from the Bigwig).

The bodyshell too were an exception: for these models, Tamiya used a totally new technique called “blow molding” that allowed unmatched details using a 2 part mold (left / right). Above all, this technique allowed to curve the lexan sheet inward at the bottom of the bodyshell, instead of flat sections as it was the norm until then (have a close look at the front and rear lower ends, and also the bottom side between the front and rear wheel arches). The end result is just amazing, but extremely fragile, reason why this technique was never used after that. Today, the same result and quality can be achieved, but using 3 part molds: the production process is much easier and allow a much better control over the lexan thickness.

It is probably quite difficult to imagine how complex this chassis was, unless you can have a direct closer look over it, or even better, if you can build it. However, I hope the following clickable photos will help realize the Tamiya designers masterpiece. These hi-res scans come from period RC Guide Books and catalogs: they show very interesting details about the Porsche 959. Including: exploded view of the model, the complete model and chassis “catalog” presentation, the chassis diagram and last, two photos of the model “in situation”.

The first of the two “in action” photos is great, but it is not very realistic. Tamiya did not lie showing this photo: everyone may shoot the same and the model was really capable of jumping. However, it was required to take the good shot at the very first attempt because the ability of the model to remain intact after that and to repeat the action is highly questionable. In fact, the chassis is extremely fragile, especially the junction between the front gearbox and the bathtub, but also the lower arms and at the damper fixation on the lower arms.

And what about the bodyshell: at the first impact, it literally blew in pieces. At the time, Tamiya had had quality problems on the first kits because of the new molding technique: in some of the first kits, the bodyshell had holes in places where the lexan got too thin during production, so Tamiya had to provide (free) replacement bodyshells. Next, Tamiya ran into another problem, this time concerning the Rothmans livery of the model: anti-tobacco laws appeared everywhere in the world when the model was still under production, forcing Tamiya to alter the livery. The public health aspect is not questionable, but such fundamentalism in the application leading to ban miniature replicas of real vehicles that existed? Better looks like an hypocritical denial of the past to me... Anyway, Tamiya was forced to change Rothmans in “Racing”, which defaced and damaged the model scale realism and authenticity

Still about the bodyshell, it happens that the Rothmans livery is one of the most complex to paint. As for properly fixing the ABS rear wing onto the lexan bodyshell and placing the gold colored sticker above, this is very delicate and requires skills and patience to obtain a proper result. It's not finished: a complete detailed interior with driver and co-driver was included, as well as a light kit for the front headlights.

As a conclusion, before you watch the promotion videos of these two iconic models, this chassis was an exception for many reasons:

I believe it is highly doubtful another model meeting so many “exceptional” could be ever produced in the future due to modern economics in this world. But yet, some models will get close to this a few years later, namely the Avante. But we will see this later