I wanted to graphically show you how the re-release program spreads into the 100 first models thanks to the famous "Tamiya's Commemorative 100th R/C Car" poster, without considering the re-release form. About this poster, I think it was made by Tamiya, but I couldn't find any confirmation of this.

Here you will only find models that were re-released up to now, either in "original" or modernized form. The bodyshell-alone re-releases are not shown.

Also, in case a model was re-released several times (several colors for example), only one re-release is counted. 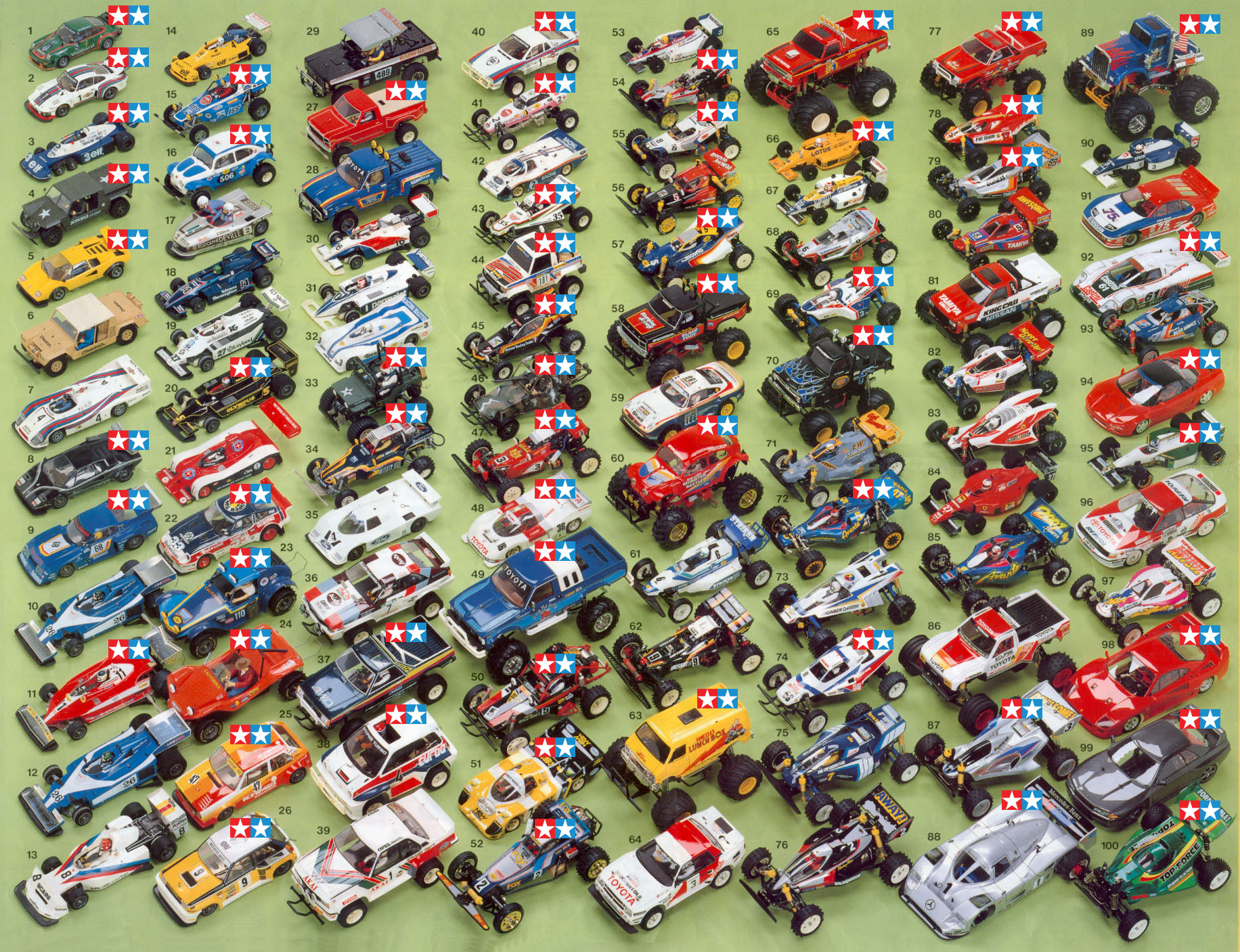 This leads us to the following conclusion: so far, in original or modernized version, Tamiya has re-released 87 models (half of them being in original form) out of over 600 models released over the last 40 years. That is less than 15% of their catalog.

Just to say, to some ever grumbling people complaining about Tamiya only releasing old models from their museum lately...

The true fact is that Tamiya doesn't face the difficulties imagined by fans when re-releasing a model. By the way, note that attempts to guess the next re-released model are vain: no one knows which model Tamiya will re-release, or when.

That said, I dare to make one prediction (not guts, no glory

) :
I think Tamiya will not re-release in original form any of the first 12 on-road models. That is all models from the Porsche 934 RSR up to the Martini Mk.22 Renault, excluding the off-road XR311 (already re-released) and Lamborghini Cheetah. I define in original form as the original bodyshell on the original chassis, which is what is considered as an "original" re-release in this article.
Indeed, I am guessing that Tamiya thinks these chassis are too basic to be re-release candidates nowadays, which would not avoid bodyshell re-releases though (alone or used on modern chassis).
However, my prediction may not resist the Porsche 934 RSR 50th Anniversary in 2016...

Economically speaking, a re-release is probably highly profitable: investissement is close to zero since the production tool already exists (moulds cost a fortune) despite the low cost of potential modifications to modernize the model. In addition, the risk on sales is pretty low: the model was already a success in the past and it is highly doubtful it would not meet its public again.

Last, the big question about re-releases: are they good or bad for the hobby? Opinions diverge: not even considering those who speculate (who do not deserve any consideration in my opinion), the answer differs upon the kind of collection and the collector's liking:

As for me, I'm obviously in the second group, even if I admire "purists" for their patience and authenticity efforts. Nonetheless, I do like when the model remains "true to original", that is when it keeps (in my opinion) its soul, its sometimes outdated mechanics and its 80's look.