The name of this platform means Dirt Belt-Driven... or not, or may be it changed over time

In fact, the platform name did match the first chassis generation, but it no longer matched the second since it is shaft-driven. Unless... 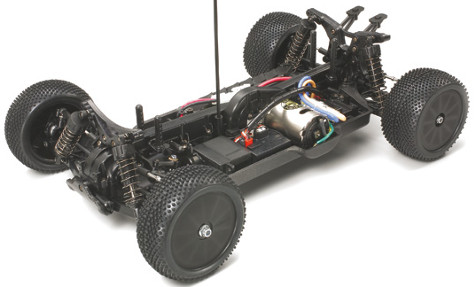 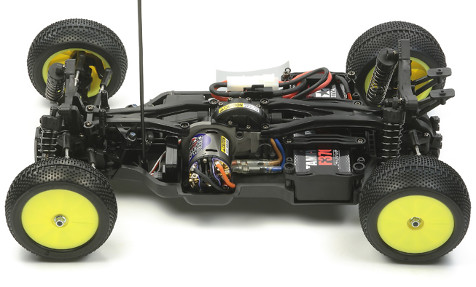 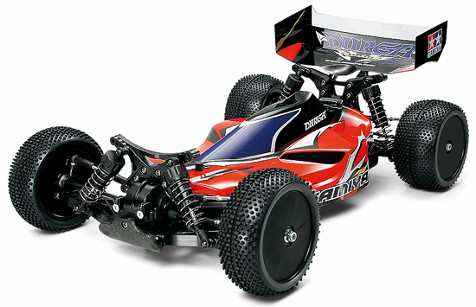 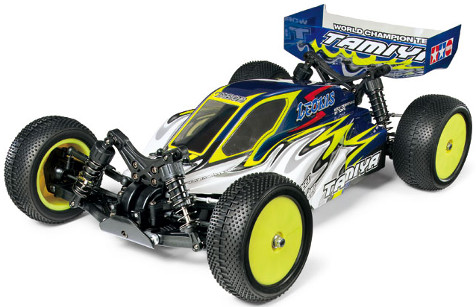 The DB-01 is the general public version of the TRF501X the Team TRF drivers used in international race (the TRF511X evolution won the European Championships in 2009 and 2010). The motor is located at the center-rear of the chassis and the transmission to the 4 wheels uses two belts. The DB-01, especially its R (hopped-up) version, was very successful in club racing because the chassis was very reliable and performed very well. The general public version Durga and Baldre sold well, but far less than other more leisure-oriented models in the offering.

Well, if you have a closer look to the two DB chassis, you can notice symmetry at some point in the transmission: apart from the motor this time mounted center-front, the DB-02 transmission looks like it copies the DB-01's. In both cases, the centrally located motor propels either two belts or shafts, one per drivetrain. The DB-02 is the general public version of the TRF502X... that doesn't seems to perform and to be as much reliable as the TRF501X yet. However, it seems that the first cause of breaks or premature wear of the gears were due to mistakes when assembling the model, the manual not being the most precise and self-explanatory when describing some steps.

Conclusion on the DB platform

As the name says, this platform was initially made for belt-driven buggies. But Tamiya seems to have extended its role: when closely looking at the two DB chassis, the architecture looks similar. As if, let's suppose, one manufacturer would like to determine which kind of transmission would be the best for a race-oriented chassis, let's say a chassis that could win international races. For this, the best would be to design chassis as similar as possible, each one using one specific transmission type, either belts or shafts. This may, for example and to keep guessing, avoid a manufacturer to design first a shaft-driven Touring platform and then to design a few years later another Touring platform this time using belts and say at last win World Championships with one TRF414 model. For example. Just saying.

So far, the conclusion about this platform is that the DB-01 / TRF511X is an excellent chassis, perfect for club races and good enough in TRF flavors to compete with the world's best competitors. As for the DB-02, things look to have started slower compared to the DB-01: you rarely win at the first try, so we can expect the DB-02 to receive further improvements soon.

Anyway, most important, it lools like Tamiya is decided to go for 4WD buggy wins at international levels, something that didn't happen since the Avante back in 1988.