This is a model I bought from a member on the Vintage-RC forum. his model was built from new spare parts: it is in perfect shape and was never run since it is not fully built. I had been interested in this model for several months already, but studying it for the Tamiya Off-Road chassis article made me literally fall in love. with it

I consider this model as a true RC jewel in general, and one on Tamiya most emblematic model they ever produced. Indeed, it concentrates all their know-how at the time it was released back in 1986 and today, it still remains an exceptional model.

Only two models use this platform, both are very specific models in Tamiya range of products, and both are very much looked after by collectors. 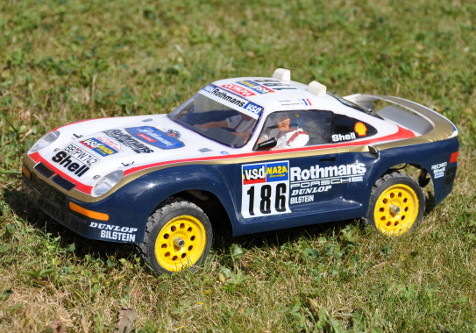 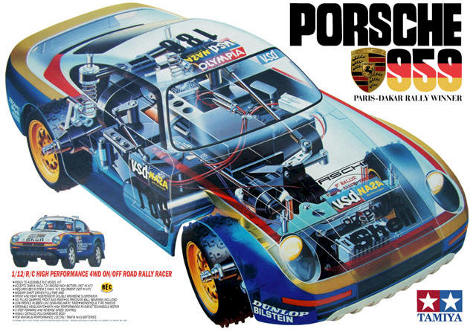 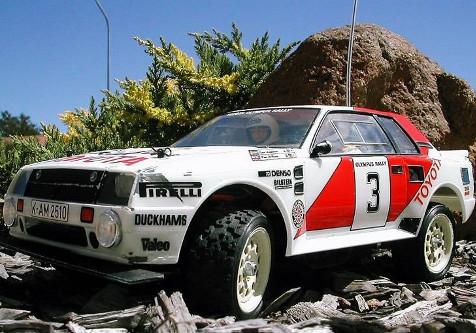 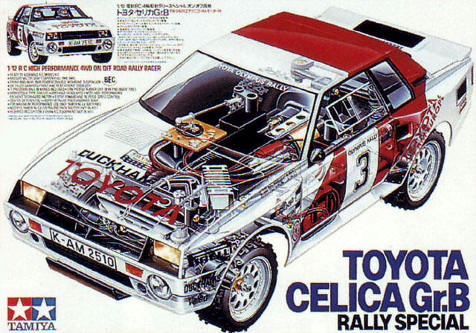 Promotional video of the Porsche 959 (© Tamiya)

These two models share the same chassis except some improvements on the Celica:

But the story of the Porsche 959 RC version was not that quiet due to the relations between their respective manufacturers. It seems that Porsche revised the reproduction rights and that Tamiya did not accept to pay more. Furthermore, several countries voted laws against cigarettes ads at the time, so there are two different versions of this model showing these issues:

Of course, the first variant is the most looked after by collectors since it is an involuntary limited edition. Anyway, there are some whispers around internet saying that Tamiya would have destroyed the body molds so no re-release would ever happen. What is true is that the blow molded technique used for the so thin and detailed bodies was limited to these two models and then abandoned.

My Porsche 959 when it arrived

The model was built from new parts either coming from the Porsche 959 or the Toyota Celica. But the build is not finished and the bodyshell needs painting and decoration.

The auction was very clear and detailed so I had no bad surprise: the seller I was lucky to meet is honest, and this becomes rare. The inventory of missing parts is short but I will need to dig my spare parts stock to complete the model:

Last, at least one screw thread is damaged on the front left arm where the damper needs to be fitted. 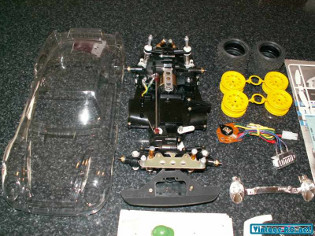 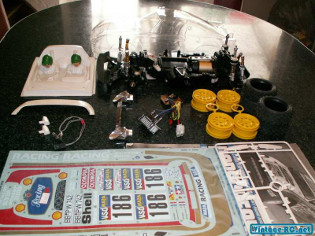 The bodyshell onto the chassis 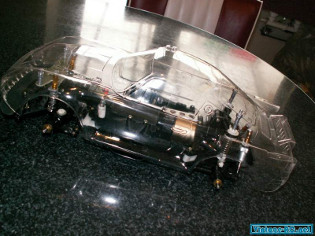 Concerning the bodyshell, it is a reproduction: the lexan is way too thick to be original, some details are not as sharply molded as they should and the front and rear lower ends do not come back underneath the chassis. Nevertheless, the overall quality is good enough for me. But this always needs to be checked before buying, and for this too, I must thank the seller for being very honnest. Note that this bodyshell replica can be found on ebay for about 35$.

I will not modify this model since there is not much to do and because I want to keep it as stock as possible: this model is complex enough not to add more complication. But I will think about fitting an electronic speed controller to replace the mechanical one due to the 540VZ Technigold motor: it will be more progressive and will transfer less brutal constraints to the chassis and the pinions.