Custom changes on the WT-01 chassis

After the first runs, I made some changes on the chassis to improve the handling.

First, I replaced the 4 friction dampers with hydraulic models. The general handling is greatly improved, especially on chaotic fields! The truck doesn't bounce as much and it lands much better on jumps.

Then, I replaced the stock Mabuchi 540 with an Orion SV2 Method 27x2. 540 is the size of the motor (can't be changed), 27 is the number of turns for the wires (same as the Mabuchi), and x2 means double wiring (x1 on the Mabuchi). The double wiring brings more throttle to the motor, which is important for this kind of heavy big wheels truck.

I also finished the decoration by placing the definitive stickers on the bodyshell. 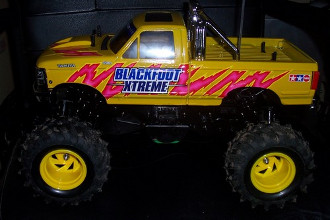 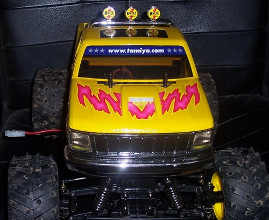 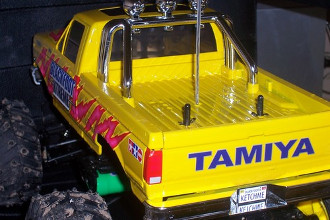 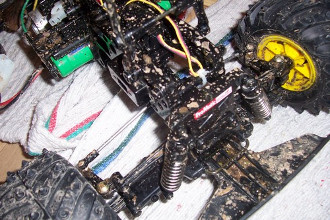 Right back from the first runs, I noticed that the chassis was spread all around with water, mud, sand and pebbles. Just about everywhere on the chassis frame, especially where it is very difficult to clean

So I decided I would design a protection case for the most fragile components: the receiver and the electronic speed controller.

The main idea is to fit the electronics into a box, allowing cables to go through but keeping the box waterproof. That's why I decided to make the cables go through the bottom of the box (so the water would have to go up the cables to reach the components).

To give you a more precise idea, you can see the result of a wet run on the chassis. Fortunately, no damage occurred despite of the multiple projections spread all over the chassis frame.

The starting point for this protection box is a business card box which dimensions do fit perfectly onto the chassis. I made a first try by placing the components into the box to see where cables had to go through (the speed controller, switch, steering servo and antenna wire).

After drilling, I glued the remaining plastic parts of my previous tries to fill the holes by the bottom of the box. The speed controller and the receiver were then taped into the box using double sided tape.

This assembly has to be done when the box is fitted onto the chassis otherwise you will have to disassemble the steering servo which is just lost deep inside the chassis frame.

Finally, I filled any remaining hole with silicon both from the inside and from the outside of the box. I used silicon meant for bathroom joints.

The box cover just needs some cuts to let the antenna wire out of the box, and then to cable tie the whole protection onto the chassis frame. The following photos show the final result: 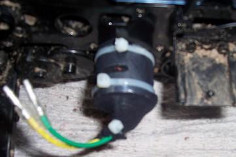 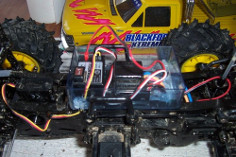 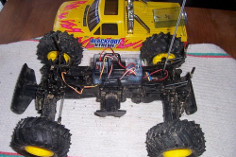 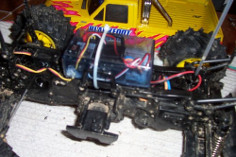 This protection does its job perfectly. However, the truck is not fully waterproofed so don't try to make it run into a river. First, this is not a boat, and second, the steering servo can't be water protected (this is a moving part, and I couldn't find how to protect it without bothering the rotation movement). The top of the box can be removed in summer: the electronic components may heat up and it would be wise to remove the cover to let them breathe.

On the last above photo, I used a piece of panties maintained by cable ties to prevent pebbles to go inside the motor. It is far from being beautiful but it is very efficient and it does let the motor evacuate heat.

More than a year after, the check up

I drove this model a lot, and it experienced many of my "new beginner" pilot mistakes. Furthermore, I drove it sometimes hard on difficult surfaces and I made many jumps with it.

The rest is only normal wear, like the rear tires spikes which are seriously worn. But the original motor pinion (18 teeth) is just good for the bin: the teeth became so thin that they seem sharp like knives. A few more runs and I think this pinion would have become bald. I had to change it and I replaced it with a brand new 20 tooth pinion.

Because after several runs, and especially because I drove other models, I found my Blackfoot to be slow. The most obvious was it straight line speed limit that it reached very soon. That is why I replaced it with a 20T pinion when I discovered the state of the original 18T.

Anyway, the balance for this model is very positive. Except the bodyshell (what a guess), it is very solid and doesn't require to be maintained. I never had the slightest bad surprise either switching it on or while running: the Blackfoot Xtreme can deal no matter what. Well, the way I drive it. In conclusion, it does correspond to the promises on the box: Xtreme is just the name. Of course, it can deal with much more powerful motors, but I am not one of those that like to destroy a model when landing several meters jumps.

This is one of the very first runs of the Blackfoot. This one in particular that made me think about protecting the electronics. 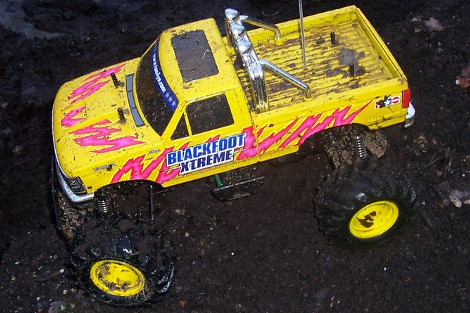 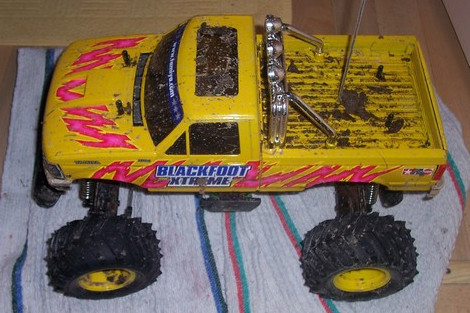 The playground was very muddy (it rained just before): I had a great time running in these conditions and I had another great time cleaning the whole truck during over an hour

Despite all my love for this model, I finally decided to sell it. This model is important for me as it is the one which made me renew with an ancient forgotten passion, the one that made me rediscover a brand. It also initiated my interest for vintage models, something I couldn't imagine back in 2007 (remember, that was still the Traxxas E-Maxx craze).

All my collection and all this website content were originated by this Blackfoot Xtreme: it survived to many runs (especially the first ones) before I progressively left it apart to focus on other models and especially vintage ones.

So long my dear Blackfoot Xtreme. I wish his new owner lives exciting moments with it and, who knows, may be he will share his passion with other fans too.