Some custom modifications on the King Blackfoot

On a Monster Beetle, there are 3 main weak points:

The two firsts points were redesigned on the different Blackfoot generations and should not be a problem anymore on the King Blackfoot. The third is no longer a problem either... unless you used the original Monster Beetle body mounts as I do. It is a good idea to reinforce them, even more as my King Blackfoot will be seriously driven: its motor is a Kyosho Mega Motor de 22 tours (yes, the pink one!).

The solution solution is to secure the space between the two chassis mounts and the two body mounts. It is easy to make: it is the same built you can find on many Lunch Box to reinforce the chassis.

The required parts are the same for both stiffeners, the only difference being the length of the aluminum tube:

The ø 5mm aluminum tube (external diameter) can be found in any RC plane shop as it is used for wing structures on planes. 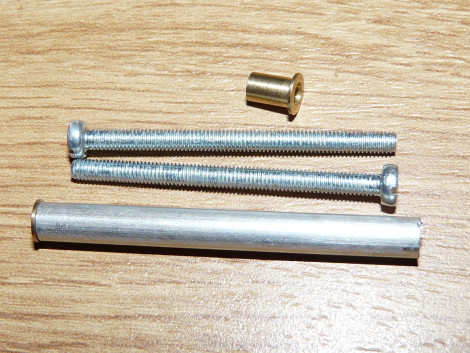 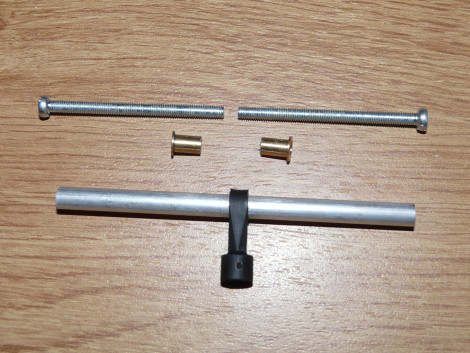 Cut the aluminum tube with a saw. I recommend you cut them a little longer that required. Sand paper will help you adjust precisely to the correct length and get a perfect finish.

On the longest tube, insert the damper base. You'll have to widen the hole to pass the tube through it. Just drill into it with a 5mm bit. Place the damper base right in the middle of the tube.

The next step is to place each tube and to screw the 3x40mm screws. The screw length gives more rigidity to the aluminum tube. You can use a threaded rod instead, but you won't gain any rigidity: if the aluminum tube should bend, this would mean the force onto the chassis would break everything else.

Here is the complete install of the two stiffeners onto the chassis: 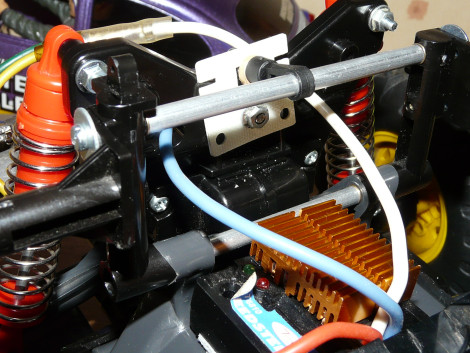 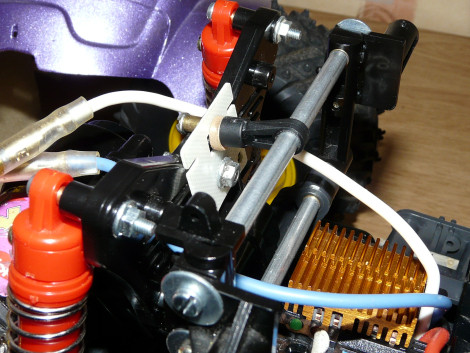 The damper base used on the upper aluminum tube lets you add another fix onto the rear damper tower to limit any move of the body mounts. It is a basic fix but it does the job: an epoxy plate, a 3x15mm screw and a nut. The type 850 bronze metal bearing (recycling again) and the little pipe are used to fill space between parts.

The upper stiffener leaves room for a outward movement. You can eliminate it using the original Monster Beetle G1 plastic part. But as it was generally the first part to break on the original chassis, I think it is useless to install it. The remaining movement is very limited though: but if needed, I will try to make an additional stiffener for it.

My Monster Beetle #2 bodyshell was not exactly in perfect condition when I placed it on this chassis. After a few runs, the SuperStock BZ muscles had turned it into some kind of convertible (might be the failed jump landings though 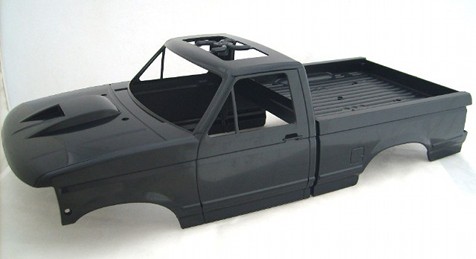 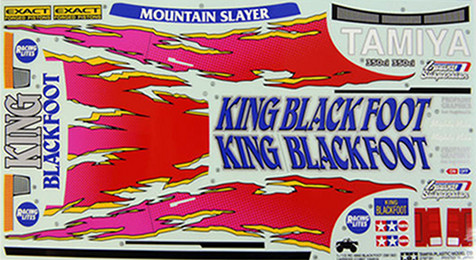 Warning: the bodyshell does not come complete. You need to get these extra references:

With all these parts, you can transform a Blackfoot Xtreme bodyshell into a King Blackfoot's. I want to point out this is a visual effect, not an exact replica since there is a major difference between the two bodyshells: the air intake on the front bonnet.

Despite this, at the cost of cutting the bonnet sticker, the result is pretty OK: 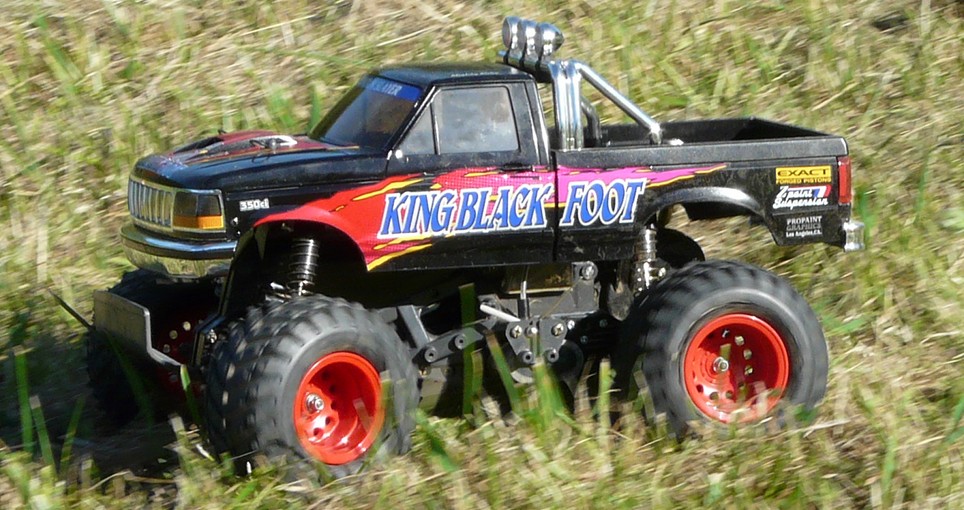 The snow finally came out, so this was a nice time to run the King Blackfoot.

For the driving part, racing line precision and handling, weather conditions could not lead to any kind of analysis

Nevermind, for the driving fun, no problem at all: the King Blackfoot is great. The suspension does its job perfectly, smoothly but never leaving the chassis bump the ground. The motor didn't seem in great shape as the power it delivered was somewhat weak for a 22 turns: I bet the T2M Speedster Jr speedo (even rated 19 turns) is guilty for that as it made frequent micro-cuts. Anyway, I planned to replace it by a better one.

The general handling is very good, except for jumps because the King Blackfoot always lands on the rear wheels. Despite of the dampers action, it will always have one of these reactions: rear bouncing and flip to the front wheels or completely flip rear-way. Depending on speed, it always makes a salto, either front-way or rear-way. That's a good way of testing how solid the body mounts are: no problem. Either landing on its roof and getting back on its wheels, or just lying on its roof like a turtle on its back, the body mounts kept solid. And you can bet that I'm not proud at all of some jump landings

Some photos while my hands could still operate the camera in the cold. 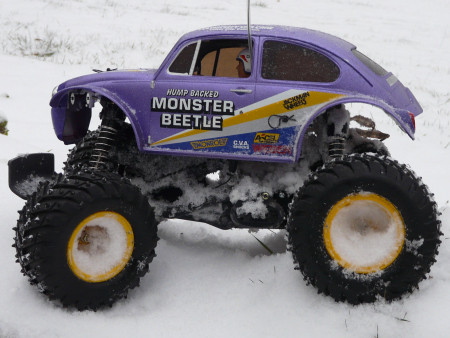 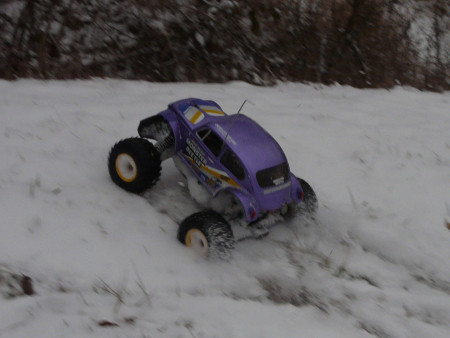 Update 03/03/09: the King Blackfoot is great! An afternoon driving on a rough terrain and the suspension works like a charm. An afternoon also dedicated to dominate the beast power that makes it handle like a Lunch Box each time you start full throttle. And of course, it was time to take some air... 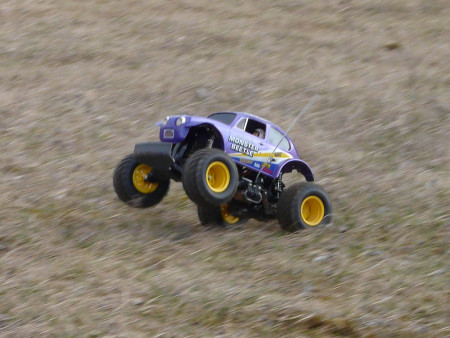 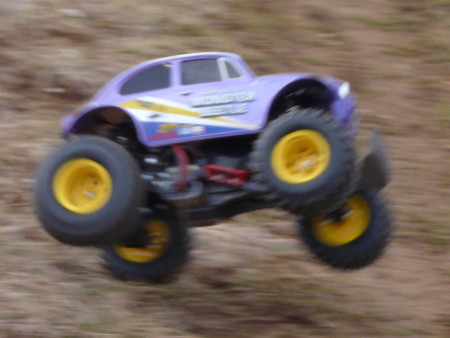 Bonus: the King Blackfoot promotional video when it was released back in 1997 (© Tamiya)