Mon King Blackfoot when it arrived

As previously at the beginning of the article, this model is an opportunity found on the Vintage-RC forum. The chassis is in great condition as it is mainly assembled with new parts. Tires, electronics, bodyshell and the stickers are missing.

What is missing is no problem: the bodyshell is the same as my Blackfoot Xtreme's except a few details in case I would like to dress it like a King Blackfoot. I also have spare tires and electronics.

Anyway, this chassis is actually meant to wear my second Monster Beetle bodyshell and its wheels. My 1st Monster Beetle will softly run with its cute body, and the King Blackfoot will seriously run with the spare one.

Here are the photos of what I received and a quick setup to get an overview of the complete chassis. Then, with the Blackfoot Xtreme's body placed on the chassis:

Parts as they arrived 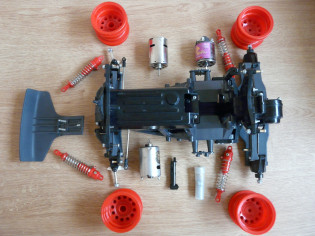 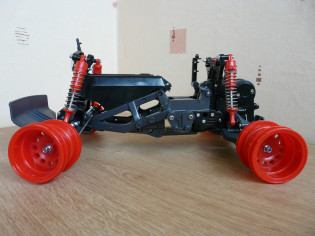 With the Blackfoot Xtreme bodyshell on 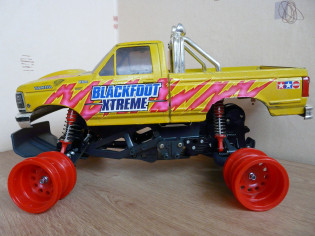 The chassis is complete and was delivered with bonus items: ball bearings, 2 Mabuchi/Johnson 540 motors and 1 Kyosho Mega motor (22 turns). I will test these motors: if the Kyosho still performs OK, I will probably mount it on this King Blackfoot. Anyway, this model will probably get better than a "stock" 540.

The plan is also to change the friction dampers with my Monster Beetle #2 yellow hydraulic dampers if they fit. For the wheels, I'll have to check how I can fit its rims to the King Blackfoot hex drives. Of course, I will also entirely strip the chassis down to fit ball bearings all around and see how I can fit the bodyshell.

I reviewed the entire chassis: everything is OK, juste a few screws to change.

The next step was to strip down the gearbox to fully ballrace it (12 type 1150 ball bearings for the whole chassis). The evolution compared to the original Blackfoot or the Monster Beetle is obvious: it really looks robust.

The chassis frame is almost strictly identical to the orignal's, including some fixation holes that are no longer used. For example those used to fix the steering servo metallic protection plate from under the chassis. Well, I know that since I did fix that plate I had in my spare parts.

As for the wheels, I decided not to use my Monster Beetle #2 golden rims to preserve them (they are almost brand new). I didn't want to use the brand new red rims I received with the chassis either. Instead, I dug into my spare parts to find original Blackfoot yellow rims: it is mainly a choice based on the look of the model.

The King Blackfoot was not designed for them though. No problem at the front, but the rear wheel axles length is too short. The hex rims allow a shorter wheelbase than with the 5 point system used on the original Blackfoot. After I dug again into my spare parts, I came up with re-release Frog wheel axles which are longer: problem was solved.

In the end, the chassis is now a little bit wider at the rear compared to the front. The difference is about 5mm on each side and it is almost invisible. Who knows? May be the truck will even be more stable this way

Now, the damper question. I wanted to mount the yellow hydraulic dampers of my Monster Beetle #2 but I faced an unforeseen problem. These damper base is too short but also, the plate that maintains the spring is too big: it touches the upright. I tested with 50520 long damper base even if they are black: they don't touch the upright, but the plate diameter for the spring is to short. Since the yellow hydraulic damper never existed with long base, the only way was to use the lower part of the red friction damper from this King Blackfoot together with the upper part of the yellow ones. Quite an ugly solution. The other solution is to install the hop up damper of that time: the famous 53037 Hi-cap dampers that were provided on the Egress (58079) and which are now very rare and expensive. The other hop up dampers proposed in the manual were already the 50520: they are those I will install as soon as I receive them.

In the meantime, the King Blackfoot red friction dampers are still installed.

Since I published the article, I brought slight changes to the chassis: it is now equipped with its original red rims, a SuperStock BZ motor, a TEU-302BK speed controller and Tamiya dampers. 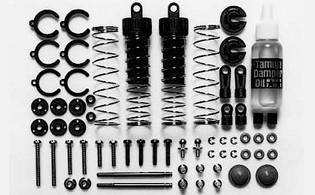 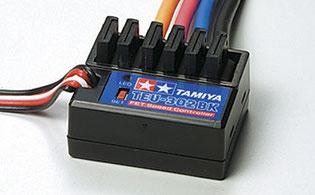 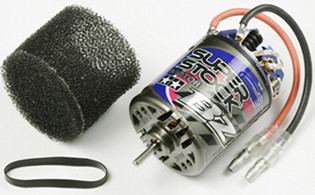 End of changes on the chassis.

As there was none in what I received, I thought I could use the one from my Monster Beetle #2.

As I said before, the chassis frame is almost the same as the 1986 edition. The result is that the lateral body mounts can fit like a charm. At the front, it is a little bit different as the damper tower is a little bit wider. My King Blackfoot was delivered with an unknown part that perfectly fit and makes an excellent front body mount. The previous owner certainly had the same project 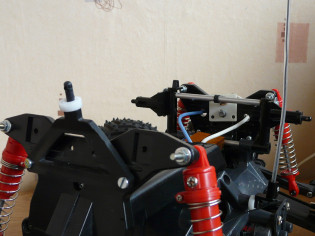 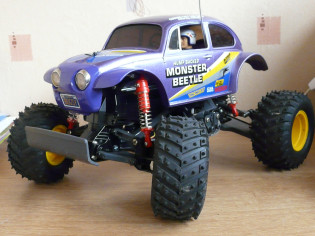 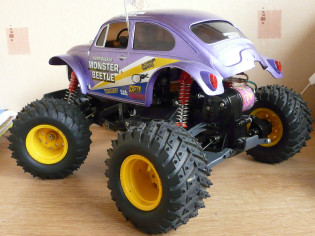 On the first photo you can see a plastic bearing on the front body mount. It is meant to place the body at the correct height and avoid the body to shake. I had to find a way to use those damn plastic bearings that I always replace by ball bearings

I still have to work on the antenna pipe fixation: it is not possible to install the original Monster Beetle antenna support onto the King Blackfoot gearbox. For now, I used a fix that makes the antenna pipe go through the driver window. It works but doesn't look great.