Because of the new off-road track at the club and because I sold my Dark Impact, I needed a new modern 4WD buggy as a counterpart to my Sand Viper. This is how this Rising Storm came by, which is also a nice opportunity to discover a new chassis.

The DF-02 chassis was released in 2004 as the Gravel Hound, quickly followed by the Rising Storm. The challenge for this chassis was to continue the DF-01 success story: it seems to have done well, but with no glory if we consider the few number of models using it. We even thought the platform was abandoned after the DF-03 was released, but the Avante Aero (inspired by a Mini 4WD model) revived the series in 2012.

However, the situation could be very different in Japan (possibly in other countries too): it seems the DF-02 is used for a local promotion championship, just like the Fighter Cup in Germany (you know, the DT-01s, DT-02s and now the DT-03s named "Fighter" something: there's a reason). This concept of championship exists in several countries, but restricted to Tamiya budget models on which motors and options are limited (to keep budgets low).

However, considering the release of the new TT-02 chassis and its TT-02B buggy variant in 2013, we can suppose that Tamiya will now definitely abandon the DF-02 and use their new versatile platform instead. 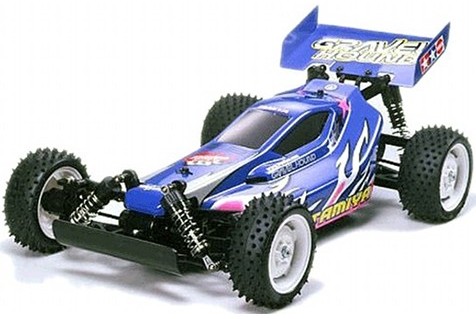 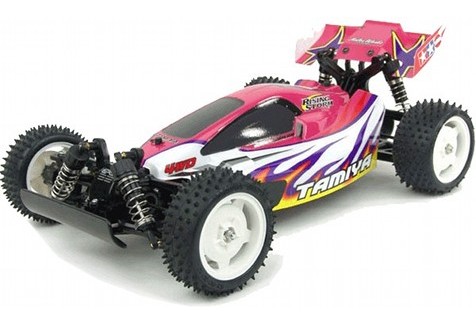 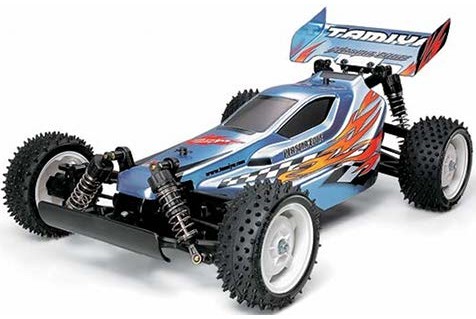 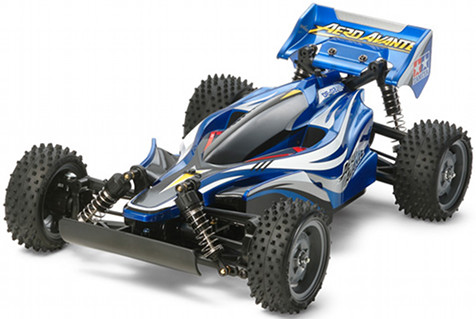 The DF-02 is an entry-level leisure chassis that can be considered as the buggy version of the very appreciated TT-01 chassis with which it shares parts. As it seems, its reputation is to be as reliable as its on-road cousin.

I just said the DF-02 is the "TT-01 of buggies": technically, this is not exact because too many parts differ. The two photos below speak by themselves: 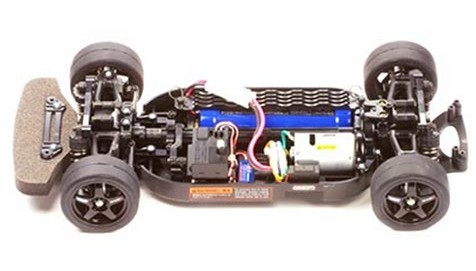 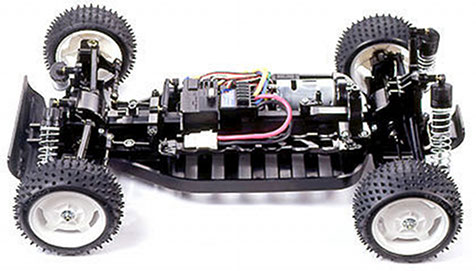 Be the arms (necessarily longer on a buggy), the chassis bathtub, the reverted chassis layout (motor and battery position), or even the gearbox housings, all are different.

However, the main driveshaft, the motor mount, the differentials, the spur gear, the gearbox outdrives and the ball bearings kit are the same. In short, all the gearings are the same.

These two chassis were designed at the same period and share the same concept of being basic and reliable. Both are targeted to beginners, they offer very few complex setup options, their soft plastics will forgive driving mistakes instead of breaking, and most of all, they are quite cheap.

Why choose a DF-02 chassis?

Good question since I used to own the Dark Impact, which is technically superior and more modern. The answer is a question of timing: I sold my Dark Impact late 2012 because there was no suitable track to drive it in the neighborhood. But since march 2013, I can now access a new track.

As a starting point for my searches, I listed the requirements my new chassis had to comply with: 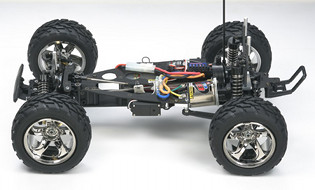 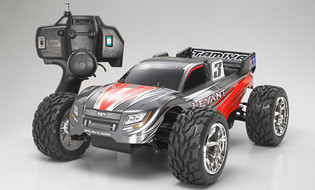 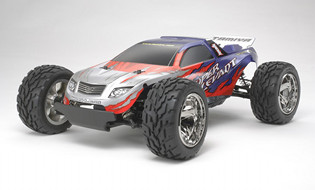 These are not true buggies, but since it is easy to replace their wheels, that's why I listed them. But I quickly removed them from my list because they miss two of my criteria: price and most of all, reliability.

The Vajra is more or less based upon the Avante chassis design, which is not the one I would recommend first in terms of reliability and maintenance-free perspectives. As for the Levant and Super Levant, it looks like the chassis derives from the TB-01 (thus quite reliable). But there is so few information available about these models that I preferred to remove them from my list (not counting the price argument since these are RTR versions).

Let's go for the next candidates: 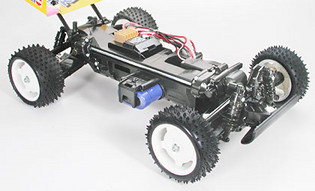 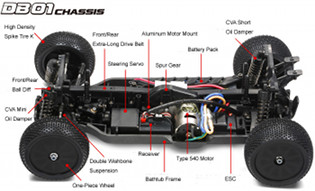 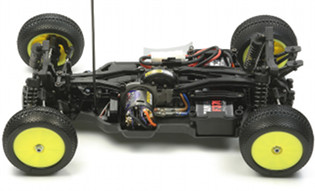 I already know the first one this is was used by my Baja King. The TL-01 chassis is really good on-road, but its off-road derivate is not fantastic in my opinion. Off the list.

The DB-01 chassis looks like having issues with its ball differentials: be real or not (most problems seem to come from bad user-assembly), one RC rule is that ball differential and maintenance-free are not concepts to mix. Off the list.

We're left with the DB-02 chassis: as it seems, this is a great racing buggy, and reliable as per the first available feedbacks. However, ball differentials mean at least regular checks or maintenance and the price doesn't match the "cheap" argument.

OK, so last series of candidates: 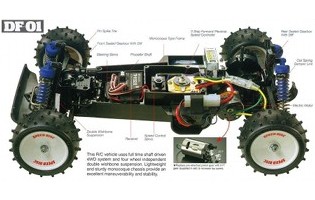 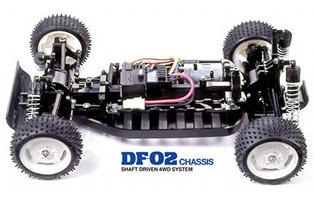 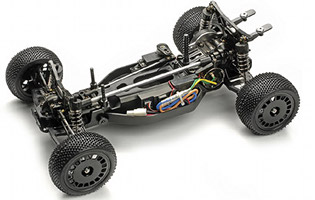 Of course, I first thought about the DF-03 since I already know it. As for reliability, I had suffered some problems with the motor heat dissipation and the rear gearbox not being dust-proof (classic problems with this chassis). But I must confess I had never spent any efforts to solve them because I had very few opportunities to run my model. So I removed it from my list mainly because I didn't want a chassis I already owned.

The DF-01 chassis: obviously, that's not the most modern, but yet

. Despite the reliability issues to be expected due to the old design, especially because of how I plan to run it, I still considered this chassis to be a serious candidate. It cost me time and efforts in reasoning myself to conclude it was not suitable for how I planned to drive it: I hate to ruin models. Difficult decision to make, but reason hopefully won (for once... and for now

So here we are: the DF-02. Reliable chassis, quite modern, strong, cheap and maintenance free: exactly what I was looking for.

My Rising Storm when it arrived

With this model, the goal is to get a 4WD buggy, always ready to hit the track, something basic, cheap and maintenance-free (or so). So everything started with buying the model: still available in a few stores for the price of a TT-01 based model, I preferred to go for a second-hand model in order to keep the budget low, especially since a few options are required to make it truly reliable. So I surfed to the internet second-hand market and a few clicks later, I got this: 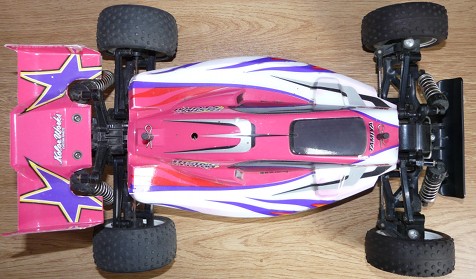 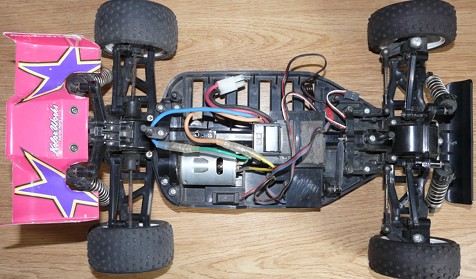 Overall, it looks quite in good condition: tires can be considered dead, drive shafts are rusted and the battery door is missing. Let's have a closer look:

The chassis underneath has some scratches with are consistent with the drive cups and tires use: from this, we can guess the tires are the stock ones, which means this model was not much used. However, the front shock tower suffered: the plastic is twisted and won't resist long before breaking. This is the well-known weakness on the DF-02 chassis: it moderately appreciates to land on its shock towers (well, they were not made for that). Finally, the 4 drive shafts are all rusted (which is not a big issue, actually) and the rear right damper is bent (definitely broken).

In the end, the first inspection is OK considering I bought it less than 50€. The A parts tree (reference 51075) and one damper would suffice to throw this Rising Storm back to the track. However, my model will receive some options and other modifications to make it more reliable.