Modifications on the TA-02T chassis 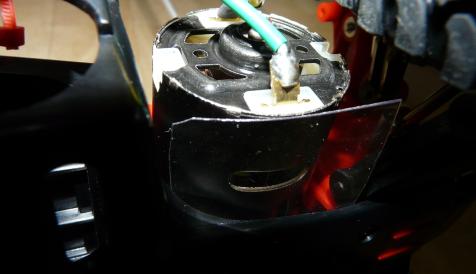 I haven't installed any option on this model except a complete set of ball bearings to replace the stock plastic and metal bearings. Hydraulic dampers are provided in the box.

In addition to the tips about the o-rings to protect the body and the antenna pipe piece over the propeller shaft, I made another one based upon my experience.

Sometimes, dust and pebbles tend to get into the motor using its aeration holes. The way the motor is fitted onto the chassis makes one of these holes oriented towards the lower side of the chassis, the other one being at the opposite (towards the top of the chassis).

I cut a remaining lexan part to place it between the rear gearbox and the bathtub chassis. There is no need to fix it as it directly fits on its own into the chassis and protects the lower side of the motor by enveloping it thanks to the gearbox shape.

After the first run, I noticed a problem at the front of the chassis: the tires touch the body when the suspension works. It sounds terrible when it occurs, but it is also a problem since it may scratch the paint and ruin the hours spent on decorating the body.

After having a closer look, the third of the suspension travel needs to be blocked in order to keep the wheels from touching the body. This can not be a solution. The provided body mounts are too short and they are specific due to their inclination: I could not find any longer compatible mounts to raise the body up. 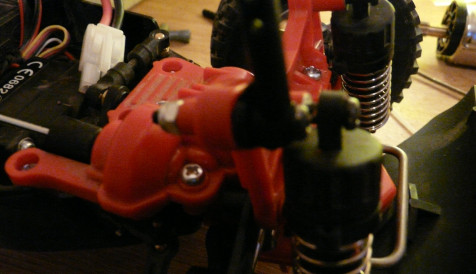 I tried to mount the A sprue parts form the Manta Ray (58087/58360): not a solution either because the dampers need to be replaced by longer ones. Furthermore, the body mounts can not be fitted the right way since they no longer the body holes. So I left this idea apart.

Digging in my spare part stock, I found compatible body mounts, long enough but straight. A bad solution would have been to drill new holes in the body. A much better solution was to make them get the correct orientation towards the body holes by leaving them room to move a little bit so they could reach their target.

So, I just drilled into the body mounts screw holes to make them bigger and used 3x20mm screw with a Nilstop nut on the other side to block them, but leaving a mere 1 mm space for body mount movement. Last operation was to fit the body on and set how high I wanted to fix it onto the body mounts, no forgetting to insert the o-ring to protect the inner side of the body from scratches.

The body is now fitted a little bit higher than before, but the wheels can not touch it anymore, even when the suspension is fully compressed. Though, it is hard to notice the difference since the F-150 still looks very realistic.

They next custom change will probably be some kind of protection for the chassis to avoid front wheels projections onto electronics. At first sight, it should not be very difficult to do, but I mainly need some time to get into it

I could not resist very long: stick pack and radio ready, go! The first impression is that it is fast. It's not a rocket, but it's fast. The second occurred at full speed at the first sharp cornering on tarmac: it ended on its roof. I spent so many hours painting this body, it starts pretty bad. So the rest of the run will be on a dry dust track: a large way with some dry puddles. Here we are, that's pure fun: the F150 suspension is very soft and it just sticks to the ground. The handling is very much like Protrucks videos that can be found on the net. Of course, the suspension travel is not as important, but the general feeling is the same.

The steering is precise, racing lines are quite easy to find and to keep. The rear drive train is the first to slide in a corner taken too fast, but it is easy to correct it. In dry puddles, the suspension does its job and the F150 only flies if the jump is big enough. But when it flies, it seriously tends to nose down.

That leads us to the first con (solved above): the tires touch the body when dampers are are fully compressed. At the rear, it is not very important as the suspension needs to be fully compressed. And when it occurs, there is barely a 1 millimeter problem. On the contrary, the problem is worse at the front: when wheels are straight, they already push hard on the body. When they steer right or left, the problem is even worse et the sound of tires onto the body do not leave the slightest doubt about what happens. I did follow precisely the manual instructions on that matter: so I'll have to study that close not to ruin the body after a few runs.

The second problem happened by the end of the first battery pack and forced me to stop. The photo below explains it all in addition to being pretty realistic: 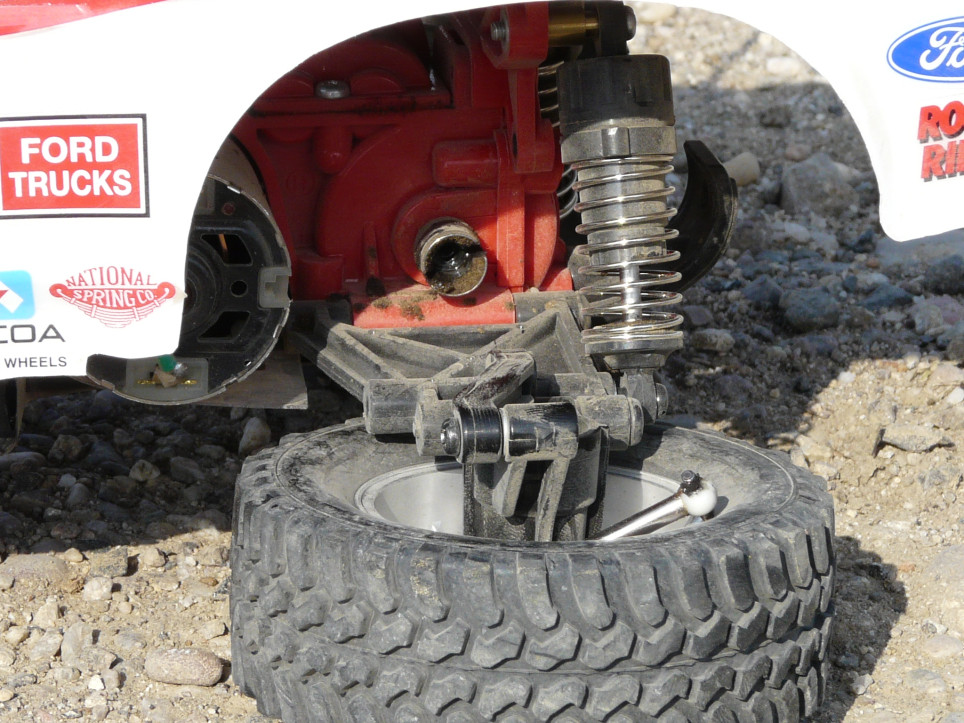 Hopefully, nothing is broken, and I only lost a screw and a spacer. the top arm screw just decided to move away and live its own life, which leaded to an unscheduled pit stop. I think the only solution is to replace it by a longer screw and to secure it with a flange lock nut.

Apart from this, I also noticed that that bath tub chassis progressively fills itself with dust and pebbles projected by the front wheels. I will try to fix this also.

Anyway, driving this F150 is great. I think the best track for it is dust or hard sand. For mud, apart from a protection system for electronics, I am not sure that the tires will grip enough to avoid the "Holiday on Ice" syndrom.

So, I have to fix back the rear wheel, to find how to solve the problem of tires hitting the body (maybe by limiting the suspension travel) and to protect the chassis from dust and pebbles. I'm already looking forward for the next run!

Update 03/03/09: the bodyshell of this model is way too beautiful to ruin it with my poor driver skills. I still have to learn how to correctly turn a corner without getting on the roof. That's why I found a replacement bodyshell and a set of wheels that no longer risk anything: so I currently drive my F-150 transformed into a Toyota Prerunner (presented at the beginning of this article).

This model is very interesting to drive because it is truly all terrains, even if sand is its best. The suspension work is really remarkable and makes this model look real: it is such a pleasure to drive it and to see it being driven. 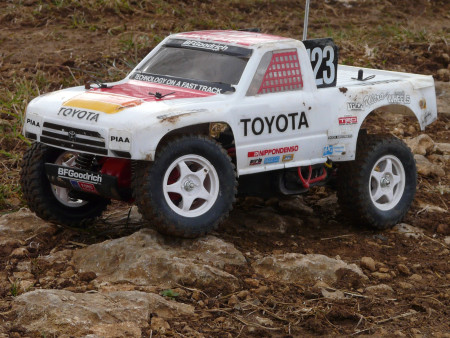 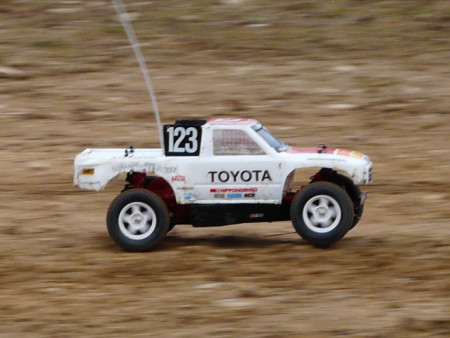