The M-02 chassis was never designed to receive the Celica LB Turbo Gr.5 body: first, there's a 17 year difference between the two and second,Tamiya certainly didn't anticipate a nostalgic fan would attempt this some 15 years later

. So it will require some adaptations for this low-profile front end and thin body to fit on. I will also have to think about a new body mount system since the original can't fit on the M-02.

Reducing height at the front

Once the body mounts are removed, the body still needs to be lowered. The first candidate to work on is the steering rod. 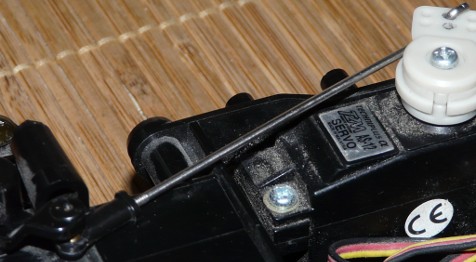 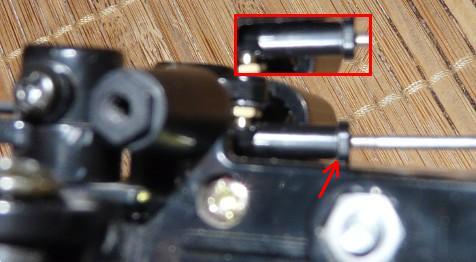 This mod gives a 6mm height clearance where the steering rod links to the steering system. You only need to fix the steering rod from the bottom at both ends, precisely the contrary of what the M-02 manual recommends. You can see the height gain on the second photo that shows the original mounting.

For the previous 6mm height gain to be effective, you also need to rework the steering linkage caps because they are still 3mm too hight.

What's needed to replace one cap 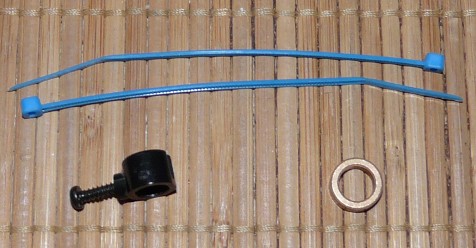 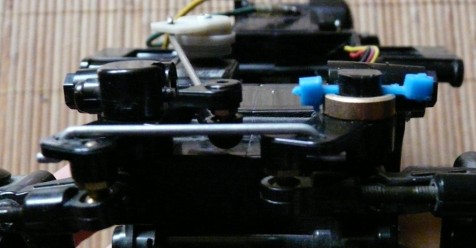 For the complete system, you need four Rilsan collars and two 1280 metal bearings (those come from my Xsara WRC when I replaced them with ball bearings). At the left side on the second photo, the black part fixed by a screw is the cap that will be removed for this mod. The right side shows the finished mod. The Rilsan collars need to be pretty thin since their function is to retain the steering linkage, not to block them.

Compared to the standard M-02 chassis, the front end side of the body is now 6mm lower and the steering system is still smooth enough.

Second requirement: a transversally mounted modern battery pack needs to be placed and leave room to the body to take place. Since 1978, battery packs seriously evolved, both gaining elements (thus capacity) and shape wise. The M-02 chassis leaves no alternative: the battery pack has to be in stick format and transversally inserted into the chassis. On its side, the bodyshell is at its shortest width at that exact place (between the doors): 130mm wide, no more. Well, where's the fun when everything is easy?

The chassis with battery mounts: too wide! 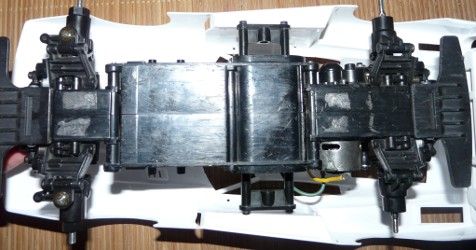 A modern battery stick pack: to wide too

An old NiCad stick pack with tightened wires: it fits! 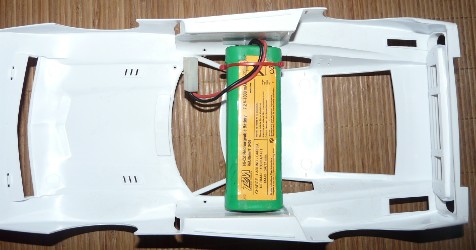 Checking with the whole chassis 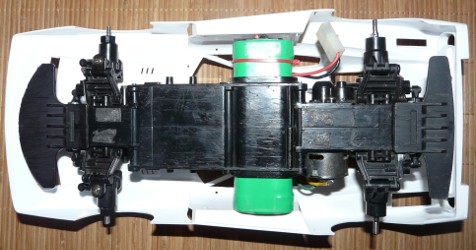 These photos only lead to one conclusion: neither the M-02 chassis nor modern battery stick packs can fit. Hopefully, I still had an old NiCad pack in my spare stock and it is a few millimeters shorter than the others. Short tightening the plug cables saves a few additional millimeters and the whole thing can be inserted between the body doors. Not a single millimeter left, but it fits. OK, short tightening battery cables this way is not to be recommended, but I found no other solution. You may eventually consider LiPo batteries as their format is significantly smaller: I don't have any and my charger can't handle them. A complete LiPo investment only because of this project was too much for me.

Now that I found a solution, let's work on the battery holders since the bodyshell is currently the only thing that retains the battery pack.

On the first photo of the above series, stock holders are too wide to fit inside the body. I still need to free up a few millimeters when the side plates are removed. A way to do this is to cut the two spurs on the chassis side to clear up 4mm.

The side plates can't be used anymore to maintain the battery stick pack: rubber bands should do the job.

Update while working on the chassis: I know it's stupid, but I forgot something important: I should have checked that my old 1300 NiCad battery pack still works

. At full charge, I only had time enough to setup the TEU-101BK speed controller and to check it works fine... and that's all. Not enough to just hope making this model move, so I had to find another battery pack.

The stick pack battery width being still a problem, I tried to understand how to make it shorter by anatomizing (well, pretty much atomizing) the one that can't be used for anything good anymore. The trick is located at the battery pack end were the wires get to the plug: every battery stick pack has a kind of plastic cap that is used to protect its elements and to guide the wires so they get out horizontally towards the plug. You have to very carefully cut the plastic shield to remove the plastic cap end... and then you'll be surprised to see that the plug wires are soldered vertically (compared to the stick pack axis). From a complete 140mm long battery stick pack (with plug wires getting out horizontally and then folding them vertically), I now get a capless stick pack with its plug wires naturally oriented vertically for a total width of 130mm. 130mm, that exact width available inside the bodyshell. Well, almost...

Almost, because the inside width between the bodyshell doors is exactly 130mm, but 2 side mounts molded on the inner bodyshell make it 4mm shorter at the precise location where the battery stick pack needs to go.

The least I can say is that this bodyset is not a direct fit onto an M-02 chassis. So, let's trim these mounts to leave room for the new battery stick pack.

The battery stick pack made shorter 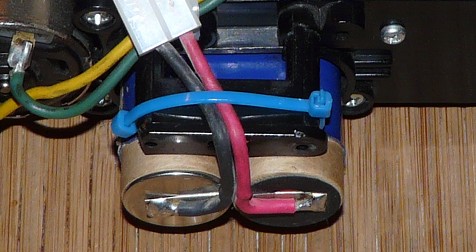 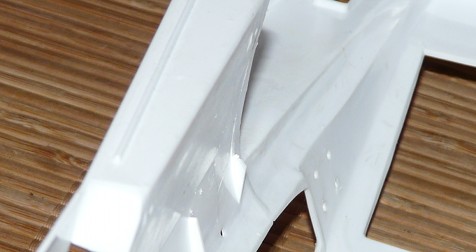 Without the plastic cap end, the plug wires are obviously made to get out vertically. A Rilsan collar will be needed to hold them correctly. Now the battery stick pack fits inside the bodyshell since the inner body molded side mounts are trimmed (on both sides).

My last NiCad battery died due to its age, I had to think about a new solution to feed the chassis. In fact, the solution was very easy and would have saved me a lot of time: there are very small battery packs which are fully compatible out there. These battery packs are the ones used on Tamtech models: their capacity is limited, but their shape is much smaller compared to classic battery packs. They are so small that I had to inserted foam to better fit mine into the chassis battery tray.

The battery pack fitted into the chassis

Autonomy severely drops but this solution is the best since the Mabuchi 540 motor consumption isn't very important. You only need to make an adapter to ensure plug compatibility.