In addition to its very wide modern RC offering, Tamiya long remained the only manufacturer to re-release models which production was stopped for years or decades. From 2013, new "historical" manufacturers joined the juicy re-release market, at least for those who are still in activity. Associated launch their re-release program with their oustanding RC10 Gold, the buggy that changed RC racing in the middle of the 80's. Kyosho followed in 2014 with the re-release of their Scorpion, another iconic buggy for the early 80's. 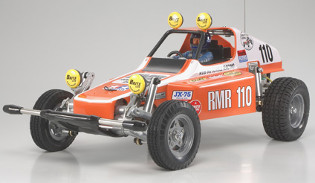 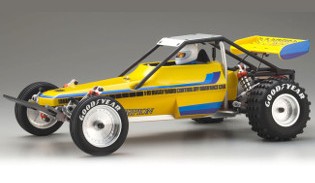 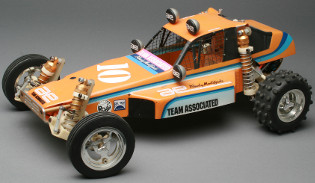 That's what we call re-releases. Tamiya's commercial interest is to satisfy the nostalgia of their wide client base developped over the last 30 years, to attract new clients who knew the models when they were first released but couldn't afford them at the time (like me), but also new clients (often young and beginners) who like the models' retro look. In addition, this is a limited commercial risk: most of these models were best-sellers at the time and the cost to start new production series is low since the industrial tools still exist.

I chose to sort re-releases in two different groups:

This article will present every re-release, but without getting into precise technical details that may serve only skilled collectors' interest: I preferred to focus on the vintage spirit that fulfills nostalgia without requiring to spend fortunes for the original model. After all, this is what the vast majority of fans consider re-releases are made for.

In order to better show the difference between originals and re-releases, I used screenshots from Tamiya's RC Guide Books to illustrate original models and Tamiya's official photos to present the re-released items. So all these images are © Tamiya.

The last section will be dedicated to bodyshells released in limited edition, some of them being sold only on the japanese market: many of them being original bodyshell re-releases.